Marking Canada's 150th anniversary, hundreds sworn in as new citizens at U of T's Convocation Hall 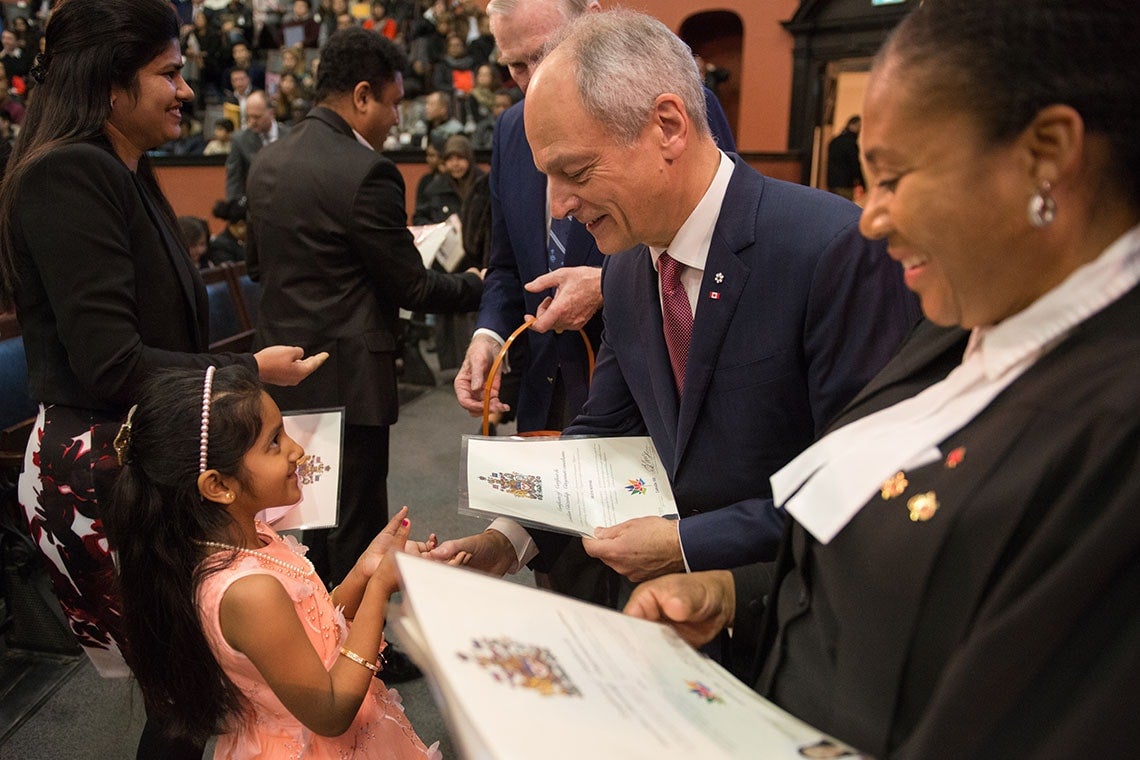 U of T President Meric Gertler greets a young, new Canadian at a citizenship ceremony in Convocation Hall on Saturday (all photos by Laura Pedersen)

In the University of Toronto hall where students take their first steps as graduates, about 500 people from around the world started a new chapter in their lives as Canadian citizens.

People of all ages and backgrounds filled Convocation Hall on U of T’s downtown Toronto campus on Saturday to take the oath of citizenship and sing the national anthem.

One of their first acts as citizens was to receive a warm welcome from a platform party that included U of T President Meric Gertler, federal Science Minister and alumna Kirsty Duncan, Chair of U of T's Governing Council Claire Kennedy, Chancellor Michael Wilson, Chancellor Emerita Vivienne Poy and University College Principal Donald Ainslie, who is also the chair of U of T's sesquicentennial committee.

President Gertler thanked those acquiring citizenship for coming to Canada – and for enriching the country with their ideas and traditions.

“The news reminds us on a daily basis of how fortunate we are to live in Canada,” he told the audience, “but on this day we are also reminded of how fortunate we are that Canada continues to attract wonderful people from around the world, people who want to help strengthen our institutions, enrich our multicultural fabric and defend our values as Canadians.” 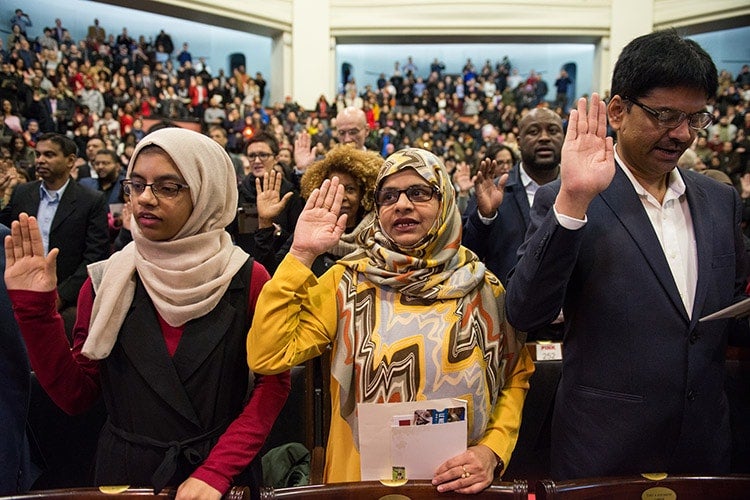 Hundreds swore allegiance to the Queen in the oath of citizenship

Duncan, who before taking office taught medical geography at U of T Scarborough and corporate responsibility at the Rotman School of Management, greeted the newest members of  “our Canadian family.”

“Most of us, our families come from elsewhere,” she said, “and they have built this country, and you will build this country. You are already building this country.”

Those in attendance waved mini Canadian flags and wore Maple Leaf pins on their lapels. The 150th anniversary of Canadian Confederation made the already special occasion even more momentous. Saturday's citizenship ceremony was the culmination of a series of Canada 150 events at U of T throughout the year.

Speakers at the ceremony took the opportunity to discuss the country's commitment to multiculturalism. Poy, the first Canadian senator of Asian descent, told the crowd that she and her husband chose to stay in Canada instead of moving to the U.S. because they thought Canada is a better place to raise a family.

“Canadians are defined by the way we behave, not by the colour of their skin,” she said.

Wilson, U of T's current chancellor and former ambassador to the U.S., said travelling had given him a special perspective on Canada. The country is “a source of hope” and “welcomes people of all backgrounds and celebrates diversity as a real strength.”

U of T News spoke to five new Canadians about why they chose this country and their ambitions. 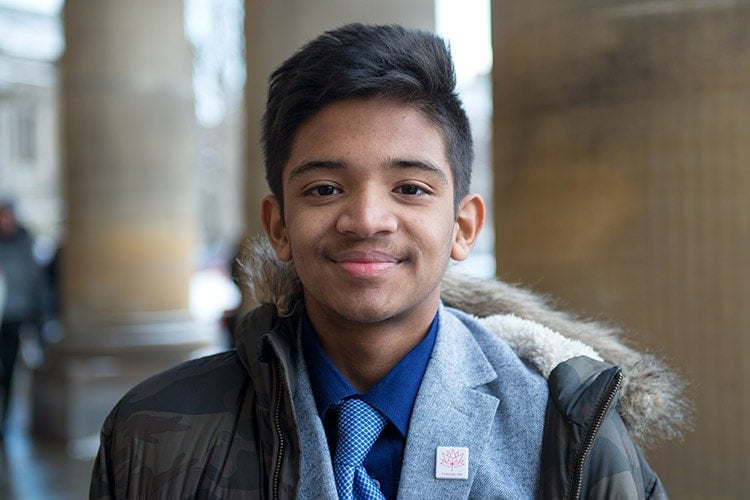 “I was excited because we've been waiting for the opportunity to become citizens for a long time. It was fun. I hope to grow up to be a great Canadian.” 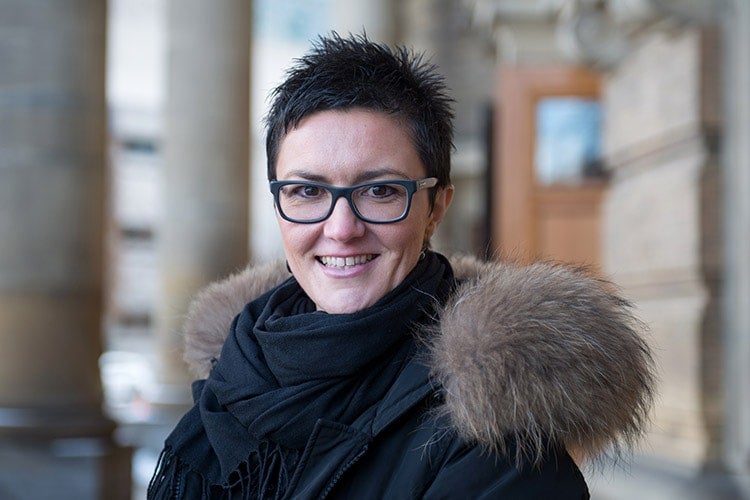 “This moment was extremely emotional for me. The University of Toronto and this country opened the door for me. I came here and restarted my academic career. I found new friends. I found a very supportive environment.” 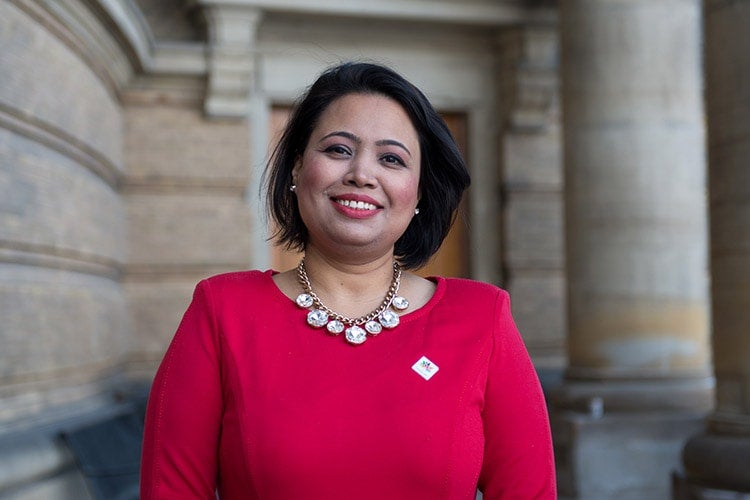 “I've heard so many good things about Canada. We met people who are Canadians and they are very polite.”

Why did she and her family come here? “I personally wanted to see snow.” 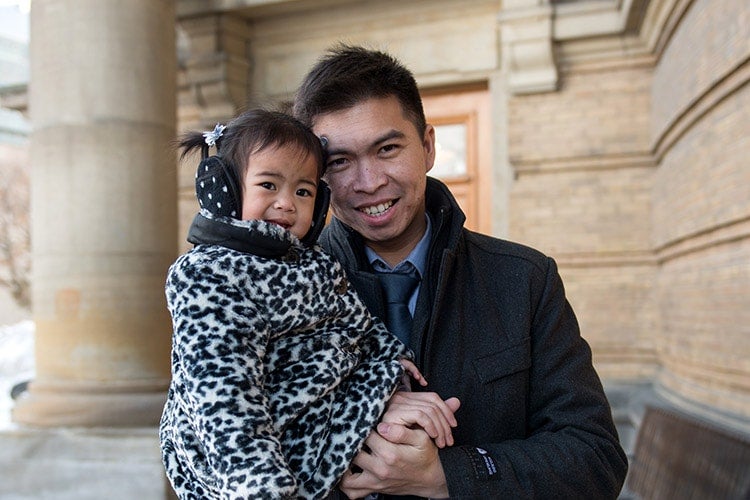 “Canada is one of the best places in the world. The people are nice, the culture is great – plus it's a multicultural country. Who wouldn't want to be here?” 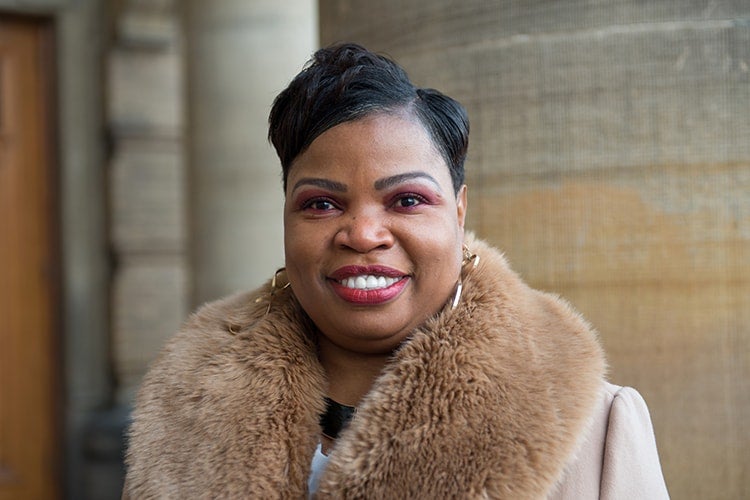 “It's the end of a long journey, and it's a great accomplishment for my family and me.”

Read about last summer's citizenship ceremony at U of T Scarborough