On magic and learning: U of T undergrad is a self-taught children's author and illustrator 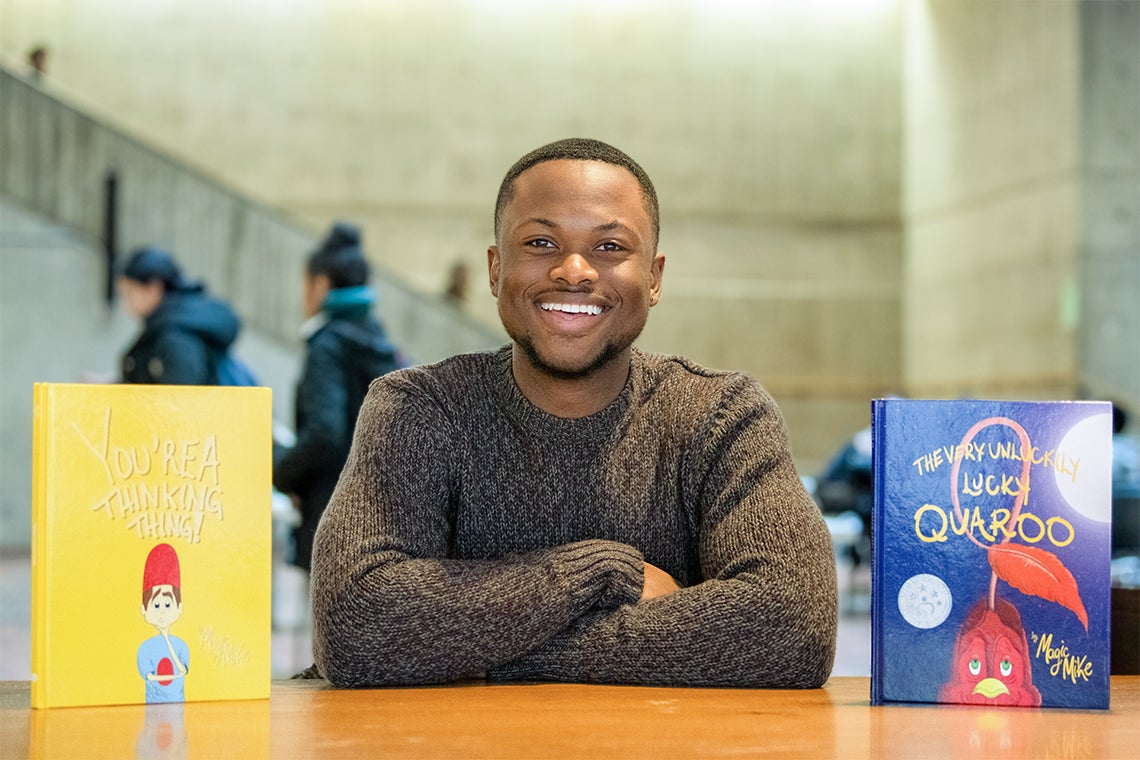 Deep in an undiscovered place lived a Quaroo, a bird with magical feathers that granted eternal luck when touched. The Quaroo was initially excited when explorers came, but they didn’t just touch its feathers – they plucked them, until the Quaroo had only one left.

That’s the plot of Michael Gayle’s second children’s book, The Very Unluckily Lucky Quaroo. It is Gayle’s first printed book and it’s now on shelves in Chapters and Indigo stores in Toronto, Ottawa and Montreal.

“The idea is about people who look at another person’s success or gift as something to exploit, and what you can do as the person in the middle of that to protect yourself,” says Gayle, a third-year psychology student at University of Toronto Scarborough.

As the Quaroo’s feathers suggest, Gayle is captivated by the idea of magic. He says his interest in the subject began in high school where students were asked to read for the first 20 minutes of their home class. While it was implied that students should read a novel, Gayle chose a thesaurus instead. He wrote down interesting words in a journal until a teacher sent him to the library to find a book.

That’s where he found Paulo Coelho’s The Alchemist, a story about a shepherd who travels to Egypt in search of treasure.

Gayle says he had never read a book so quickly.

“I experienced a sort of displacement from my world,” he says. “This book did something to me that I’d never experienced before and I didn’t have the words to articulate, so I just described it as magic.”

This inspired the name of his company, Magic Way, and his pen name, Magic Mike.

Gayle created Magic Way to publish his first book in 2016, titled You’re a Thinking Thing. The idea came to him after a philosophy class about Rene Descartes’ famous concept, “I think, therefore I am.”

He felt compelled to write his interpretation of the existential idea and eventually created a poem about the magic of positive thinking. He showed the short piece to his mother, who told him to sell it. Gayle taught himself to use Adobe Illustrator and then designed the book’s colourful pictures.

“It was spontaneous. I’d written and drawn something and I thought it was cool, so I put it together and that kick-started it,” Gayle says.

While Gayle says his first book was primarily intended for family and friends, his second work has led to book signings in stores in Toronto and Montreal.

“That inspired me in a new way, because I could see the faces that I’m writing to,” he says.

When he first began writing, a rush of creativity left him with a collection of story ideas – one of which became The Very Unluckily Lucky Quaroo.

As a self-taught author, illustrator and publisher, Gayle says his journey involved a lot of research, learning and growth. While exploring children’s books, he noticed many were overtly focused on teaching kids a specific lesson. He says this is why authors like Lewis Carroll, Dr. Seuss and Roald Dahl inspire him.

“These people are pioneers because they found a way to mesh having a meta lesson and writing a really compelling story,” he says. “They are stories that, when you read as a kid, it’s about a cat in a hat causing havoc, but when you read it as an adult, you can glean more.”

Gayle says his next steps are to continue book signings, work on finding an agent and continue trying to share with others the magic he felt after reading The Alchemist.

“That’s part of the goal,” he says, “to give people that experience.”