‘Look after each other’: U of T researcher on the threat posed to cities by extreme heat – and how to respond 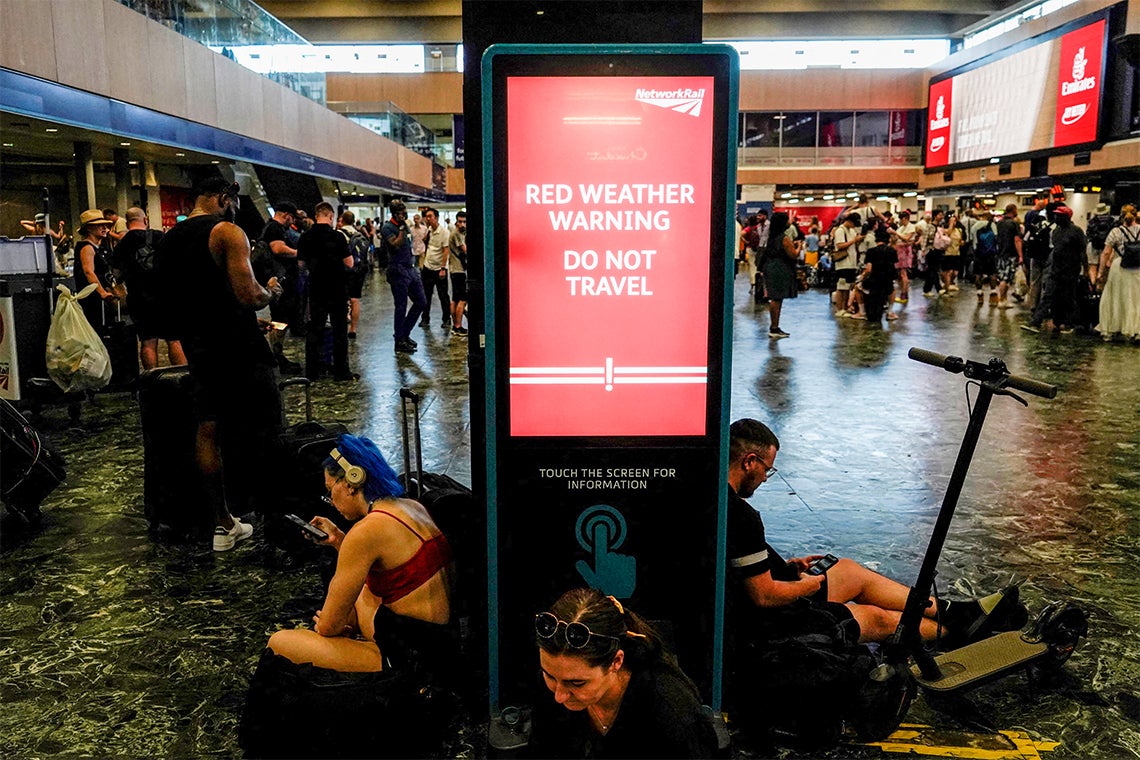 A sign warns passengers about high temperatures and their impact on rail traffic at Euston station in central London on July 19, 2022 (photo by NIKLAS HALLE'N/AFP via Getty Images)

Extreme weather events have dominated the headlines this week as dangerous heat waves hit the United Kingdom, central United States and parts of Canada while fires rage in Spain, Portugal and Greece.

The severe weather events that climate scientists have long predicted are now here and it will only get worse, says the University of Toronto’s Jeff Brook, an associate professor at Dalla Lana School of Public Health and the department of chemical engineering and applied chemistry in the Faculty of Applied Science & Engineering. 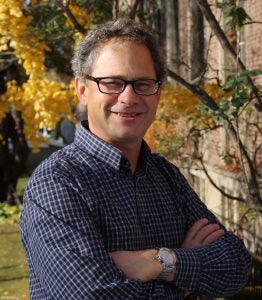 In the case of sweltering heat waves, Brook says the impact is magnified in urban areas due to the heat island effect – the generation of more heat within a metropolitan area that makes it hotter than parts outside a city.

“Temperature itself is something that doesn't change extremely rapidly but depending on the characteristics of the surface you can get areas where it can be quite a bit hotter,” says Brook, who is also the principal investigator of the HealthyDesign.City – a partnership between the Canadian Urban Environmental Health Research Consortium and the Dalla Lana School of Public Health that has developed a tool that monitors where heat waves are potentially most magnified in Canadian cities and where this may have inequitable impacts.

Parks and other green spaces can lower temperatures, he adds.

To understand why extreme heat is a growing problem in the world’s cities, U of T News spoke with Brook about the effects of heat islands and what we can do to respond to severe outcomes of heat waves in the short term.

What does it say about our climate that heat waves are seemingly a frequent event?

It means what the climate scientists have been predicting is here with us now. But our decision-makers, and society at large, haven’t been heeding the warning – so this is a sign of more to come. Last year, it was the heat dome in Vancouver. This year, it’s heat in the central U.S. and Europe.

We may lose sight of the fact that the climate is truly changing because the location of these serious heat waves moves around from year to year – but they seem to be returning more often and becoming ever-worse.

What is a heat island?

If you look at the increasing temperatures as a gradual hill over an area, such as a city, then there’d generally be a peak in the middle – an island that sticks up. There’s relatively warmer air everywhere in the region, but then there’s the “urbanized island” where it’s actually even warmer.

Over decades, we can see cities are getting warmer, but is that warming because the city has more and more dark paved surfaces and rooftops or is it climate change? That’s made it difficult for climatologists to determine what proportion of temperature changes are due to climate change versus urbanization-induced increases.

Heat islands make it difficult for us to know a true long-term trend in temperature because while we are contributing to climate change, we’re also urbanizing more and we’re creating more heat islands.

Why is extreme heat in cities a growing problem?

Heat islands can really magnify the climate heat from regular heat waves. Climate change might make phenomena such as a heat dome and a heat wave last longer, but the heat island will make parts of that dome or wave even hotter – both in the day and the night.

It’s important to think about the nighttime because that's when people tend to try to rest, recharge and cool down. Heat islands often stay hotter at night because there’s pavement, hot rooftops that re-radiate the heat and air conditioners that run even more, sucking the heat out of buildings and blowing it outside.

Mostly because it's dark surfaces. The darker something is, the more of the sun’s energy it can absorb and retain. Cities have more of the dark surfaces – rooftops, paved areas, roads, parking lots. If we have a large green forest within a city, it won’t absorb as much heat so can offer some reprieve.

How well is a city like Toronto prepared for more frequent extreme heat events?

Toronto has been a leader in preparing for heat. I can remember Toronto Public Health developing heat warning systems back in the 1990s and thinking about where cooling centres should be.

Still, it’s difficult to communicate that cooling centres exist and get people to use them. So, more needs to be done around awareness. These strategies are what we would call adaptation – it’s not stopping us from emitting greenhouse gases.

Toronto has had some pretty hot, humid summers historically and we have quite a high penetration of air conditioning in buildings. In Vancouver, by contrast, people were worse off during the heat dome because they’ve never needed air conditioning in a city with that climate.

Yet, while Toronto has a fair amount of cooling infrastructure such as air conditioning, not all Torontonians have access to it – so there is an equity consideration here.

What are some long-term infrastructure solutions needed to combat heat waves?

Cities are built the way they are. Although there’s a need to look for opportunities to plant greenery, we can’t just say, “Plant more trees everywhere.” That’s a longer-term investment because it takes a while for a nice, cool forest to grow.

We can also think about ways to promote more wind flow by not blocking the cooling breezes from Lake Ontario into parts of the city.

I think we have a resource before us in the form of a lot of rooftops on large, wide buildings – many of which are dark in Toronto. More green roofs are important to consider. Plants breathe air and they can clean out pollution so there’s air cleaning benefits, too. There’s also urban agriculture. Are there ways to use rooftops to grow things?

If planned right, green roofs could be used as a gathering space for individuals who live in or around the building. It could become a space to interact with people in your neighbourhood.

One of the things we know is that, many times, the people who are suffering and dying during heat waves are those who aren’t really known by anybody in the community. Maybe they have family that live out of town, so when the heat wave comes they’re all alone.

If there’s a space where they can go – and people can get to know them – then people can say: “Hey, where’s so and so? I haven’t seen them in a long time.” I think things that create a neighbourhood cohesion are really important because we have to help each other out.

How might the tool developed by HealthyDesign.City be used to help people vulnerable to periods of extreme heat?

We have a lot to do and, ultimately, we do need to be making changes to our city’s infrastructure as climate change becomes a bigger part of our daily lives.

But we can’t do it all at once.

So, if we’re going to try to prioritize where to begin, it makes sense to think about looking at the more susceptible populations first. The HealthyDesign.City tool – based on open demographic data – can help us think about where to start.

Given that parts of the population have less ability to get outside of the city because they are maybe older, or working multiple jobs so are busy, live in a small space and can't afford air conditioning, it seems logical to think about seniors and the less advantaged first.

If we’re trying to minimize impacts on the health-care system and minimize severe deaths, it makes sense to start with the vulnerable. 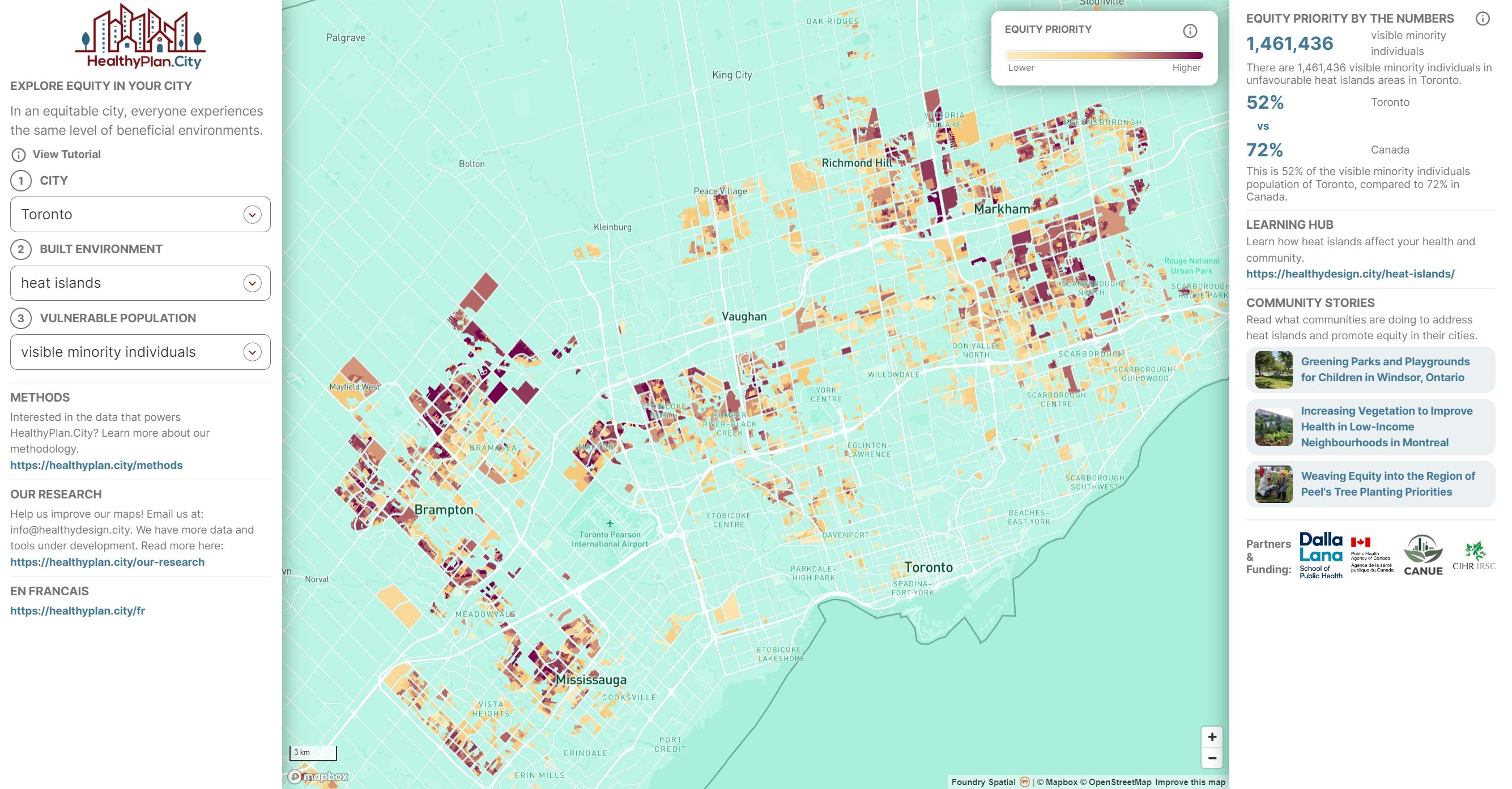 What do you hope is done with the data the tool produces?

We expect there will be a growing emphasis on resilience to climate change when it comes to criteria for planning neighbourhoods and cities. The data is readily available and it’s a starting point for planners to think in more detail about what’s feasible.

Yet, while heat is currently the topic of the day, it's only one of many ways in which we really need to move fast on building resilience.

In the past, parts of Toronto have gotten tremendous amounts of rain in a short period and because the city’s got a lot of paved surfaces and old infrastructure, we can get very bad flooding in certain pockets.

The big three in Canada for climate would be: heat, localized flooding events and forest fires and smoke from forest fires. These are all extreme weather events related to climate.

This is one simple, straightforward tool, but it’s starting the conversation to all of those things we need to think about in making our cities more resilient to what climate change has in store for us.

Do you have any suggestions for short-term solutions to avoid the most severe outcomes of a heat wave?

Enabling communities to help each other is a good start. So, if you know there is an elderly person living in your building and they could be at risk during the heat wave, we need people to act. Go knock on the person’s door and help them.

There’s a lot we can do in terms of our own social networks and community building. I think the city can create events for people in the community to meet and get to know who’s there, and to talk about these issues and why it’s important that we look out for one another.

I think there’s a lot of social behaviours that we need to adapt first – something that can be done very quickly with much less cost than planting an urban forest. It’s up to us to look after each other while we work towards slowing down climate change and adapting the infrastructure.