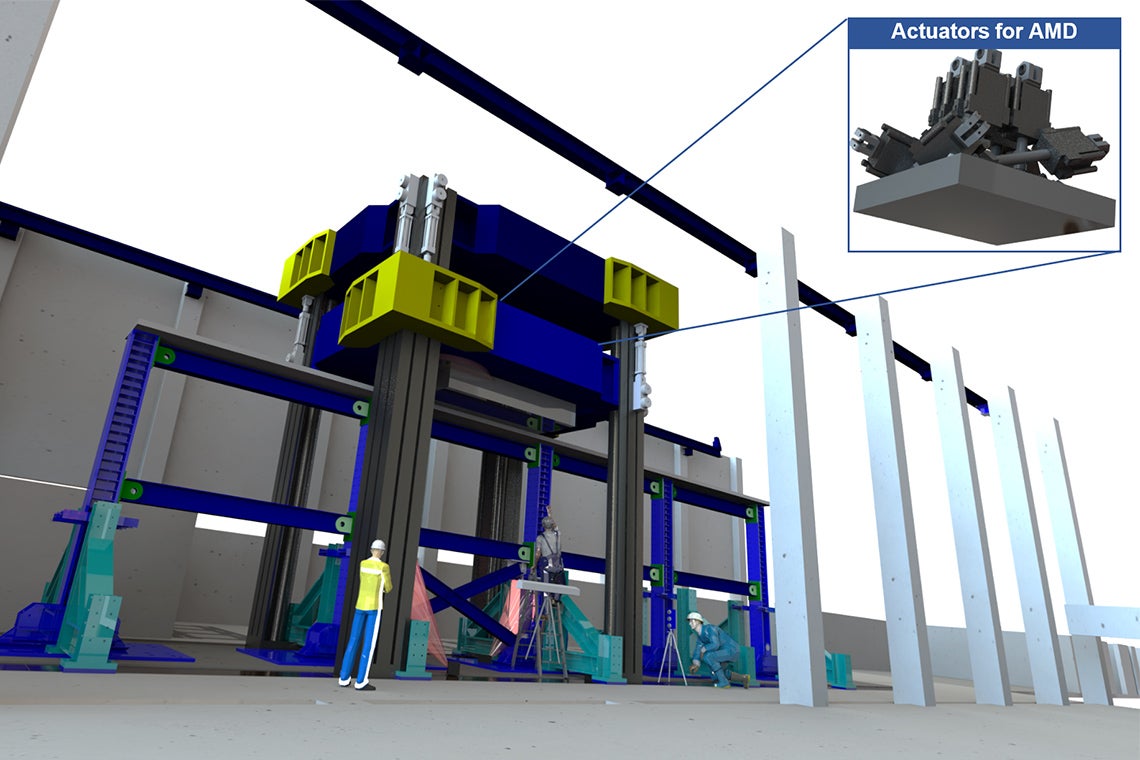 With the support of the Canada Foundation for Innovation, a new adjustable multi-dimensional (AMD) loading system will soon be added to U of T Engineering’s Structural Testing Facility (image by Myron Zhong)

An upgraded facility at the University of Toronto’s Faculty of Applied Science & Engineering – unlike any other in the world – will let engineers test next-generation infrastructure designed to be resilient in the face of natural disasters, from hurricanes to earthquakes.

With the support of the Canada Foundation for Innovation (CFI), a suite of new tools and equipment will be housed within U of T Engineering’s existing Structural Testing Facility. It will be used to design everything from elevated highways and high-rise residential buildings to nuclear power plants, including replacements for legacy structures across North America.

“Much of our infrastructure is decades old and needs to be replaced,” says project leader Constantin Christopoulos, a professor in the department of civil and mineral engineering and Canada Research Chair in Seismic Resilience of Infrastructure.

“The scientific and engineering communities, along with governments and the private sector, are becoming increasingly aware of the inherent vulnerability of our infrastructure. We also need to design new structures to address new pressures, such as a rapidly growing Canadian population, and more frequent extreme weather scenarios due to a changing climate.”

The project is one of four at U of T that are being supported by CFI, according to an announcement that was released March 3 by Prime Minister Justin Trudeau and François-Philippe Champagne, the federal minister of innovation, science and industry. The other three U of T projects are headed by: Professor Roberto Abraham in the David A. Dunlap department of astronomy and astrophysics in the Faculty of Arts & Science; Professors Jennifer Gommerman and Kullervo Hynynen in the Temerty Faculty of Medicine; and Charles Boone and his colleagues in the Donnelly Centre for Cellular and Biomolecular Research.

The centrepiece of the new development at U of T Engineering’s Structural Testing Facility is the world’s first fully movable, adjustable, multidirectional, large-scale and large-capacity loading frame.

“This unique piece of equipment will allow structural elements and structural systems to be tested under more realistic loading conditions,” says Christopoulos. “We’ll be able to better simulate the complex effects of extreme loading events, such as earthquakes, tornadoes, hurricanes or tsunamis.”

The adjustable, multi-dimensional loading module will be capable of applying up to a total of 2,000 tonnes of force in six translational and rotational directions for specimens of up to eight metres tall and 30 metres long.

The project will also include new state-of-the-art sensing equipment and the redesign of 500 square metres of lab space. Construction is expected to begin in 2022.

Christopoulos will be working with a large team of experts from within and beyond U of T Engineering. Project partners include U of T Engineering faculty members Oh-Sung Kwon, Evan Bentz, Oya Mercan and Jeffrey Packer. The team is also collaborating with a team of structural engineering and large-scale testing experts at other leading North American facilities to develop, commission and use this unique equipment.

Once completed, the new facility will be used for research by 10 professors from U of T and their national and international collaborators. It is also expected that it will allow for dozens of unique graduate student research projects and industry tests every year once it is fully operational.

Together, the teams will be able to carry out a technique known as “distributed hybrid simulations.” This means that full-scale portions of real structures – such as concrete pillars or steel beams – will be tested simultaneously in each of these labs across North America.

By integrating all of these physical tests into a single numerical model, the researchers can use the experimental feedback of each of the large-scale elements to more realistically simulate the response of the entire infrastructure system to extreme loading conditions. The data from the physical experiments will be integrated in real-time with models run using high-performance computers and the UT-SIM integration platform.

“This facility will enhance our capabilities not only here at U of T, and across Canada, but will position Canadian engineers as global leaders in the area of structural resilience” says Christopoulos. “It is a critical step toward designing the resilient cities of the future.”