By connecting with her community, U of T grad Fatima Azahraa Al Saadie finds academic success 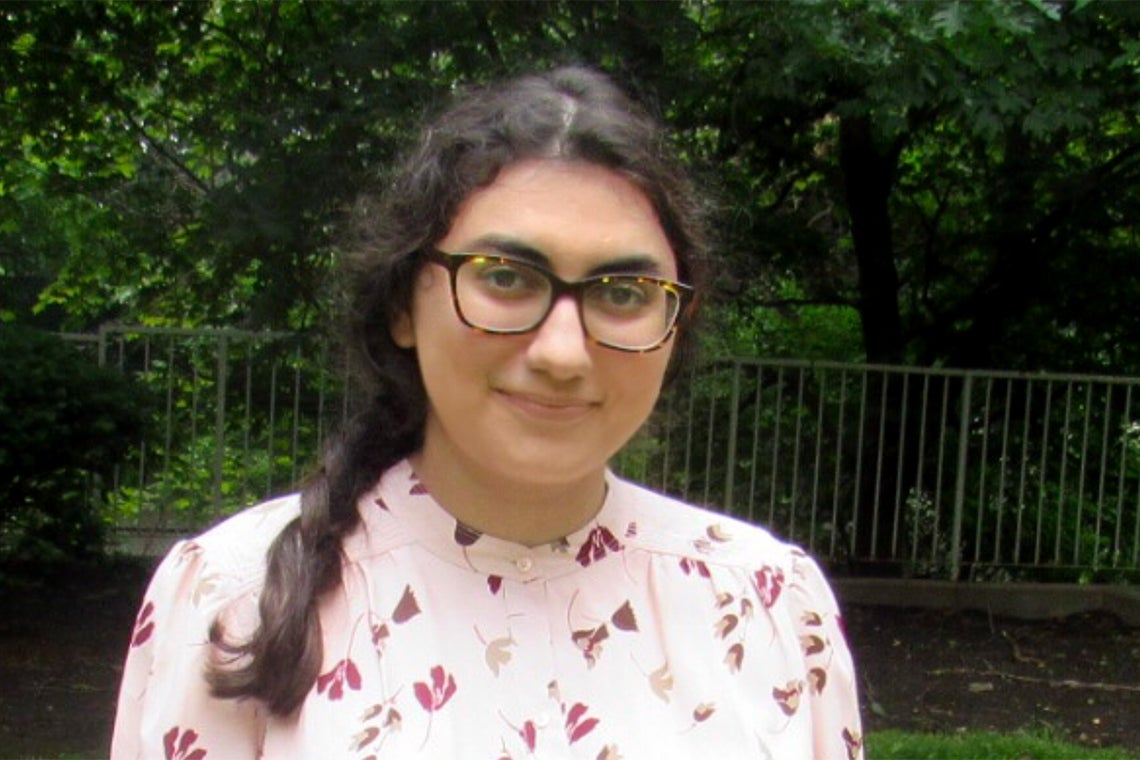 Beginning with her decision to attend the University of Toronto Mississauga, Fatima Azahraa Al Saadie’s undergraduate journey has been guided by faith, family and an insatiable curiosity.

As a high school student who was offered scholarships from York University, U of T St. George and U of T Mississauga, Al Saadie says choosing the latter was a “no-brainer.”

She knew that attending U of T would provide her with a world-class education and that being at the Mississauga campus meant that she could continue living with her mother and younger brother, who has Down syndrome and requires constant care.

“I should mention my younger brother is one of my biggest supporters. He’s always uplifting me, and I wouldn’t have made it this far without his support,” Al Saadie says.

Al Saadie, who graduated from U of T Mississauga this week with a double major in sociology and criminology, law and society, is the recipient of the John Black Aird Scholarship, which is awarded to U of T’s top undergraduate student across the university’s three campuses. Her exceptional academic achievements have also garnered her the Governor General’s Silver Medal.

“I was very surprised but also deeply honoured to read that I had been selected for these awards.” Al Saadie says.

Al Saadie credits her success to hard work, a thirst for knowledge and a supportive environment.

“I didn’t set out to be the top graduating student,” she says. “I just tried to do the best I could. I attended all the lectures, did all the readings and started assignments weeks before they were due.

“But I think it was ultimately my love of learning that allowed me to excel in university. And I'm grateful to my mentors and professors for creating a supportive environment where I could ask questions, investigate new topics and pursue my interests.”

An aspiring professor, Al Saadie will spend the next year applying to graduate programs, working as a research assistant for Assistant Professor Steve Hoffman in U of T Mississauga’s sociology department, and co-authoring research papers with Neda Maghbouleh and Ellen Berrey – both associate professors in the department.

Al Saadie grew up in Mississauga and credits God, her family and U of T mentors for supporting her through her studies.

Her mother is her biggest supporter and a constant source of inspiration.

“I thank God every day for my mom,” Al Saadie says. “Without her, I wouldn’t be the person I am today. Words cannot express how much my mom has sacrificed, and continues to sacrifice, to ensure my success."

To secure a better education and future for her children, Al Saadie’s mother left behind her family and a thriving law practice in Iraq to immigrate to Canada when Al Saadie was just two years old.

Al Saadie says her mother often regaled her with stories from her work as a lawyer, stoking Al Saadie’s own interest in the field and compelling her to study criminology. And when she pulled all-nighters, her mother stayed up with her, cutting up fruit and serving as her alarm clock if she wanted to nap.

While Al Saadie earned the highest mark among the 150 students in Maghbouleh’s class, Maghbouleh says she doesn’t recall her ever showing any arrogance about her GPA when she asked about research assistant opportunities.

As part of RISE, Al Saadie joined a team of nine researchers – most of whom, like her, spoke Arabic and hailed from the Middle East or North Africa. They studied how Syrian refugee families were resettling and integrating into their new environments.

“I’d never been in a workplace with so many people from the same background as me,” Al Saadie says. “It was really nice to see, especially in academia.”

During her first year as a research assistant on the RISE Team, Al Saadie wrote an annotated bibliography on anti-Muslim racism and transcribed and translated interviews with Syrian refugees. Later in the study, Al Saadie interviewed adolescent refugee girls about their experiences since arriving in Canada. She mentored some students who were in the process of applying to university, and says she was thrilled to recently hear that a few of them are considering attending U of T in the fall.

Last year, Al Saadie undertook an independent study that used RISE Team data to examine how budget cuts to disability care impact Syrian refugees. Her paper was approved for presentation in the Sociological Perspectives on Disability session at the 2020 Canadian Sociological Association Conference.

Her passion for research has earned her numerous prestigious research awards, including two University of Toronto Excellence Awards and a Mitacs Research Training Award. Al Saadie is currently co-authoring a paper on the educational experiences of refugee youth in Ontario with Magbouleh.

“Fatima is proof that U of T Mississauga produces world-class leaders and scholars out of the talent in its own backyard,” Maghbouleh says.

“She has truly enriched my scholarship as a research assistant and co-author,” Maghbouleh says. “Her careful analysis of data, especially on matters of disability, chronic illness and educational barriers, has pushed my own thinking forward in the project.”

Al Saadie’s research career began in Berrey’s introductory sociology of law class. Berrey offered Al Saadie her first research assistantship, and what was supposed to be a month-long contract turned into a three-year collaboration.

Al Saadie has worked as Berrey’s lead research assistant on multiple research projects, and she is now a collaborator on Berrey’s study of a U.S. anti-sustainability social movement animated by a conspiracy theory surrounding the UN’s Agenda 21 plan.

“Fatima Al Saadie is an exceptional student and stellar researcher,” Berrey says. “She is extremely smart, highly motivated and very capable at executing challenging research projects and tasks. Her attention to detail and rigor in the research process, to ensure data are systematically collected and analyzed, is outstanding. She is one of those rare students who routinely is mistaken for a PhD student, not an undergraduate.”

Al Saadie’s contributions on the project “have ranged from identifying relevant sources out of nearly a thousand newspaper articles to finding and analyzing themes in difficult-to-locate state legislation to developing the arguments for our presentations and papers,” Berrey wrote in a statement of support for Al Saadie’s nomination for the Governor General’s Silver Medal.

Berrey and Al Saadie are co-publishing two papers on the conspiratorial ideas activists have mobilized to obstruct environmental sustainability policies and the tactics they used to institutionalize their claims.

“Working with Professor Berrey and Professor Maghbouleh has been the highlight of my undergraduate journey,” Al Saadie says. “I have learned and continue to learn so much from them. I am truly lucky to have them as my mentors.”

Beyond her research, Al Saadie strives to have a positive impact on her community. She has served as a notetaker for U of T Accessibility Services and a facilitated study group leader, helping students improve their problem solving, note-taking and critical thinking skills.

During the pandemic, Al Saadie helped several newcomer refugee families apply for provincial funding and social support, helping to overcome language barriers and other factors that can limit refugees’ awareness of the public services available to them.

Through the challenges of university, Al Saadie says she found solace in staying connected to her faith as a Muslim.

“Prayers felt a lot like therapy sessions where I could air out my losses and frustrations,” she says. “Religion gave me this sort of comfort that I can’t control everything. I can just do the best I can and leave the rest to God.”

Al Saadie says she hopes incoming students will find their own emotional outlets and not be afraid to ask for help when they arrive on campus. She adds that she couldn’t have found success without the help of U of T Mississauga staff and faculty.

“I am immensely grateful to my mentors, my professors, to [Associate] Professor Phil Goodman – the chair of the sociology department – to academic advisers, and to the Robert Gillespie Academic Skills Centre for their support over the years. I couldn’t have done it without them.”

She added that students should keep an open mind.

“Your undergraduate degree is very much a journey, and journeys don’t always go as planned,” Al Saadie says.

“Don’t let your expectations or your plans for yourself and your degree impede your personal and professional development. Focus on doing the best you can and step outside your comfort zone – take courses outside your major, ask for research opportunities, get involved – the rest will come in due time.”