'This is what physics is all about': U of T undergrads probe subatomic universe at CERN 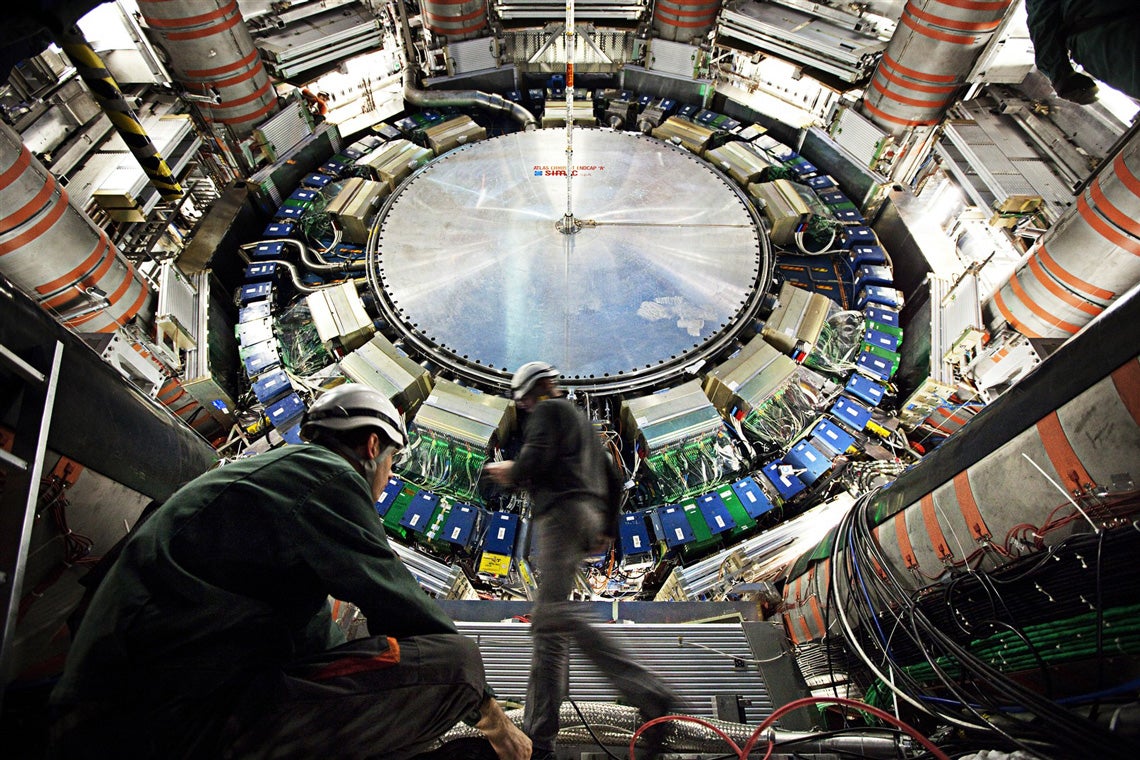 The Large Hadron Collider's ATLAS detector, where a team of more than 30 physicists from U of T, including students, post-doctoral researchers and faculty, have been leading members of a research collaboration (photo couresty of CERN)

Harsh Jaluka and Kelvin Leong – both undergraduate students from the University of Toronto – spent the summer living in Geneva and conducting research at the Large Hadron Collider (LHC), the most powerful particle accelerator ever built.

The two students were participants in the university’s Summer Abroad program, which provides students with opportunities to take courses in international locations where they gain invaluable experience.

For Leong, the experience brought him full circle.

“My interest in particle physics began 10 years ago when the Higgs boson was first discovered,” says the member of New College who is entering his fourth year of an astronomy and physics specialist program.  “It was such big news at the time – that's what got me interested in particle physics in the first place.”

The Nobel Prize-winning discovery was made in 2012 with the ATLAS and CMS detectors on the Large Hadron Collider, which is located at the European Organization for Nuclear Research (CERN), the largest particle physics laboratory in the world. A lynchpin in the standard model of particle physics, the theory describing all matter and forces in the universe, the discovery of the Higgs boson was a long-sought confirmation of the theory explaining why some particles have mass and others do not.

For years, a team of more than 30 physicists from U of T – including students, post-doctoral researchers and faculty – have been leading members of the groundbreaking ATLAS collaboration. The team includes Pekka Sinervo, a professor in the department of physics in the Faculty of Arts & Science. 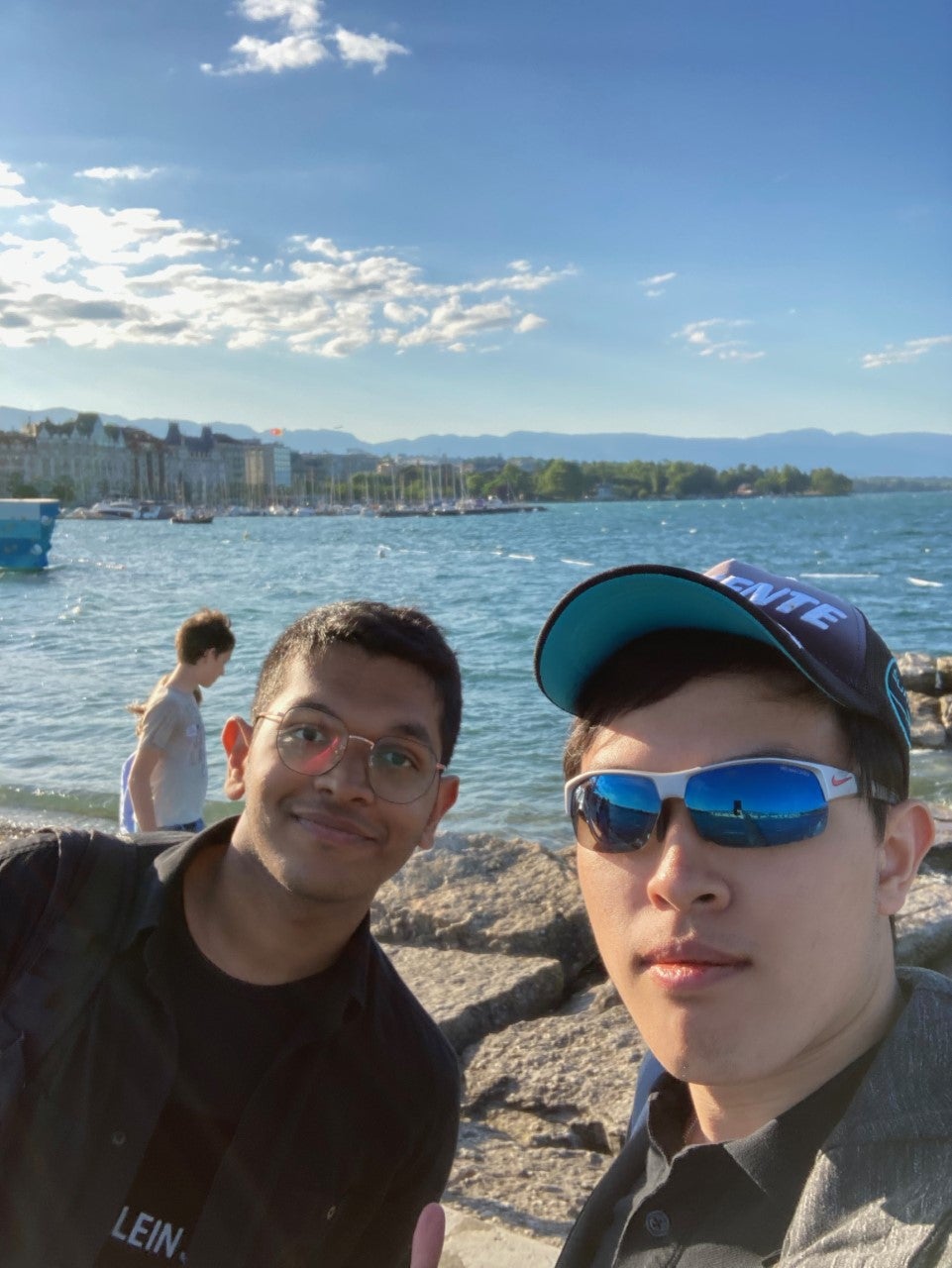 Physicists explore the subatomic realm by smashing particles together using the LHC. They then study what happens in those collisions using detectors like ATLAS and CMS. Typically, such experiments are used to confirm the existence of particles predicted by theory – for example, the Higgs boson. Other experiments measure the characteristics of the collisions and their fallout to see if they match theorists’ predictions.

“I was measuring the frequency of a rare event – the appearance from a collision of a massive particle called a top quark,” says Leong.

Jaluka, a member of Trinity College who is entering his third year of a math and physics specialist program, says he was looking at collisions in which a top quark and a Higgs boson are produced.

“Not only that, but we were looking for events in which the particles were ‘boosted’ – that is, when they had higher than normal energies and then decayed into other particles called hadrons,” he says.

Sinervo says the Summer Abroad program pays dividends for him as an instructor and for his students.

“It gives me an opportunity to work with outstanding students who have a strong interest in the physical sciences,” he says. “I enjoy the interaction with them and sharing my own interest and excitement in what we are doing at CERN.

“And the students see how research is done. They see there’s a lot of slogging, getting familiar with an experiment, understanding the tools we use – and then applying them to make progress on instrumentation or analysis of data. They also get a taste of what progress looks like in a fundamental research group.

“This is what physics is all about – not lectures and undergraduate labs.”

“When you're studying physics, the question is always whether to go into experimental or theoretical physics,” he says. “So this experience gave me a good idea what experimental physics looks like – what you do on a day-to-day basis. It’s been very helpful in thinking about my future career.”

When the students weren’t working, they took full advantage of living in Geneva. Jaluka explored the city on bicycle and took in the local culture. Leong, who had never been to Europe before, visited Bern, Lyon and other destinations.

“It was an amazing experience,” Leong says. “Working there really made me feel like I was contributing to physics research.”

“It was an incredible opportunity,” echoes Jaluka. “You get to spend two months working on the LHC, the most complex machine ever built. You get to do research and gain invaluable experience. You get to be in Switzerland, a beautiful country. So really, there were no drawbacks to this program. It was a win-win scenario.”