'We're in a good place right now': Women entrepreneurs share their experiences at U of T event 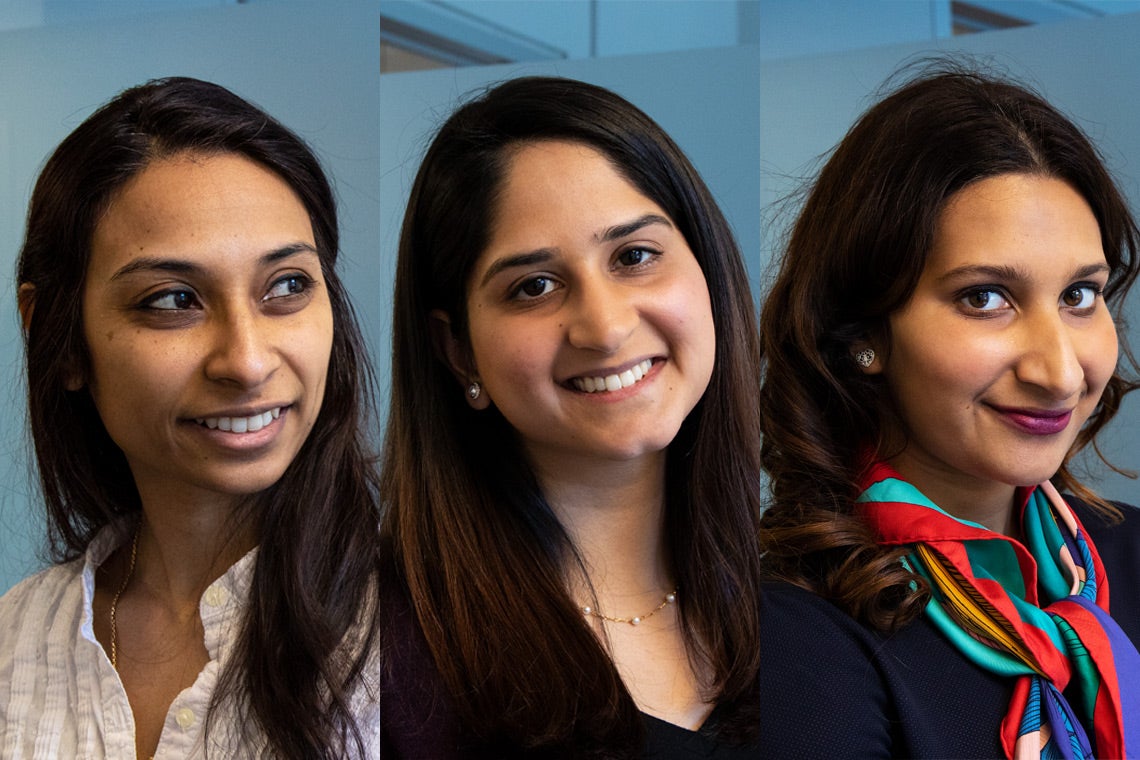 From left to right: Pooja Viswanathan of Braze Mobility, Saara Punjani of Structura Biotechnology and Leila Keshavjee of Happy Pops (all photos by Chris Sorensen)

Building a startup company is a daunting prospect – often more so if you’re a woman. But things may finally be starting to change.

That was one takeway from a panel discussion, held on the eve of International Women's Day, featuring three female founders from the University of Toronto.

While all three panellists – Leila Keshavjee, Saara Punjani and Pooja Viswanathan – acknowledged the myriad challenges women founders still face in the business world, two of the entrepreneurs said gender had relatively little to do with the roadblocks they faced while trying to launch their companies.

“I’ve been lucky to not have the fact that I’m a woman get in my way,” said Punjani, who is the chief operations officer at Structura Biotechnology, which uses artificial intelligence to help pharmaceutical companies visualize proteins for drug discovery.

She attributed her positive experience, in part, to the support of her team, which includes Structura co-founder and CEO Ali Punjani – her brother.

Viswanathan, meantime, credited the fact she had a PhD when she started building “smart” wheelchair company Braze Mobility for helping to dull any gender discrimination she might have faced while dealing with male clients and investors.

“We're in a good place right now – we're seeing a lot of support,” said Viswanathan, citing various entrepreneurship programs at U of T and elsewhere in Ontario.

The discussion, part of the RBC Innovation & Entrepreneurship Speakers Series, drew a crowd to U of T’s ONRamp co-working and collaboration space on College Street. It was moderated by Professor Christine Allen of the Leslie Dan Faculty of Pharmacy, who is involved in two startups herself.

Referring to the new ground each panellist was breaking in their respective sector, Allen called the three entrepreneurs “female pioneers.” Pooja Viswanathan, the co-founder and CEO of Braze Mobility (far right), answers a question from the audience at ONRamp. Professor Christine Allen (far left), who is involved with two startups, moderated the discussion (photo by Chris Sorensen)

Unfortunately, it wasn’t all smooth sailing gender-wise for the panellists.

Keshavjee said she definitely felt like she was treated differently while trying to get her all-natural ice pops company Happy Pops off the ground. She even recalled dealing with a businessman who didn’t believe Happy Pops was actually her company.

With a bachelor's in kinesiology from U of T, Keshavjee said things began to change last fall after she appeared on the season premiere of the CBC program Dragon’s Den, walking away with a deal with Arlene Dickinson. But while the show helped elevate her personal brand, Keshavjee said she feels for women entrepreneurs who don’t get similar opportunities.

“Women shouldn’t have to go through that to be credible,” she said.

The bulk of the evening, however, was spent talking about the specific challenges each panellist faced while trying to turn their ideas into a money-making enterprise.

Viswanathan called the experience “terrifying” because she had no idea what to expect each morning when she woke up – a feeling she said continues to this day. Even so, Viswanathan said she is “laser-focused” on trying to solve a problem after witnessing, as an undergraduate student, residents of a long-term care facility slumped over their wheelchairs and unable to get around.

Her solution? Sensors and software that help motorized wheelchair operators navigate their environment, giving them back their freedom.

She heaped praise on the Impact Centre, one of nine on-campus entrepreneurship hubs, for helping her problem-solve a way to a viable product.

“For me, as someone with no business background, that was a home away from home,” she said.

Punjani, similarly, said Structura tapped into the vast expertise at U of T – both while trying to build a product and for getting advice on how to deal with Big Pharma customers. She said the startup received support from UTEST and the Department of Computer Science Innovation Lab, or DCSIL, and is benefitting from being based at the nexus of the Toronto’s burgeoning innovation ecosystem.

“We’ve been fortunate to work with some of the incubators and accelerators here – and through ONRamp,” she said. “That proximity really helps.”

As for Keshavjee, she also credited the Impact Centre for helping her launch Happy Pops, despite the fact that it’s not a typical, research-based university startup. “They really helped me grow the business,” she said.

That growth appears set to continue. After working with Dickinson's packaged-goods focused accelerator in Calgary, Keshavjee is now preparing to relaunch the brand this spring.

“We're projecting half a million in sales this year,” Keshavjee said. “I knew the day would come when we didn't just have a seasonal business – where it wouldn't just be a summer treat for kids."