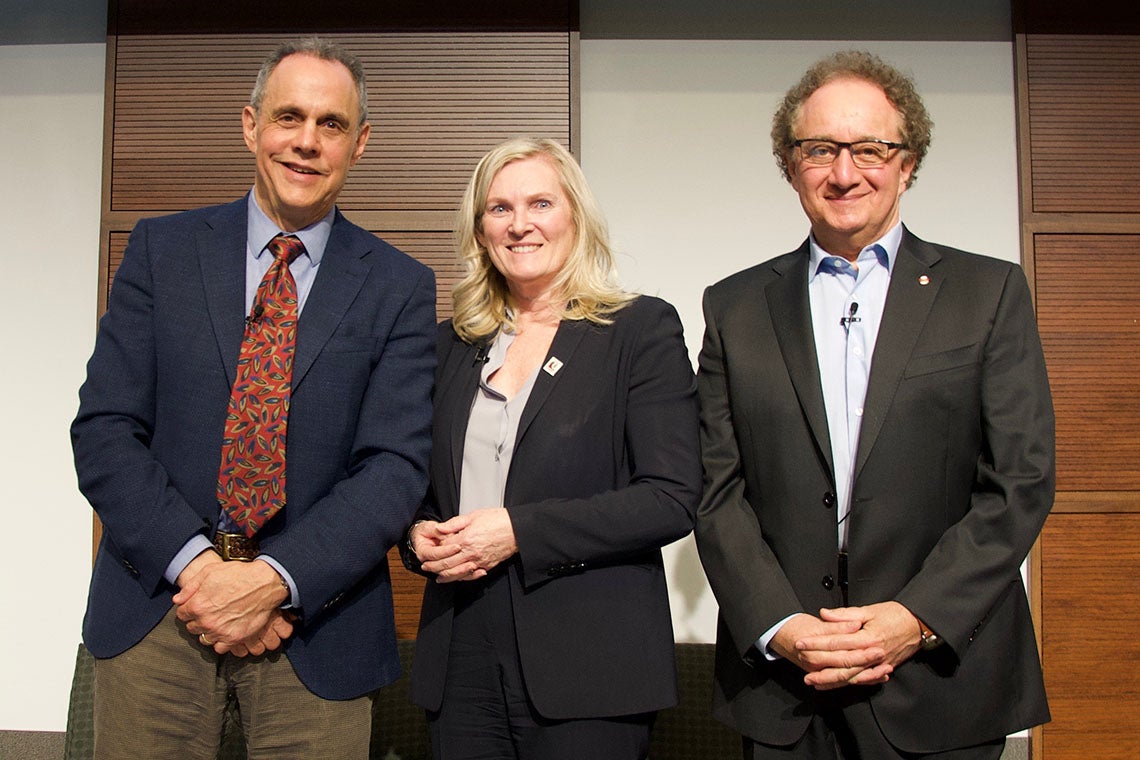 From left to right: Keith Neuman, executive director of the Environics Institute; Rhonda Lenton, president and vice-chancellor of York University; and U of T Professor Robert Brym (photo by Diana Tyszko)

In a few years, Canada’s Jewish population may exceed 400,000, making it the largest Jewish community outside of Israel and the United States.

And yet, the Canadian Jewish community is one of the least studied in the world – until now.

A new survey published today captures the identity, priorities, attitudes and values of Jews across Canada, and the results show a remarkably cohesive community overall, albeit one with its own internal divisions and associations between culture, religion and politics.

Conducted by the Environics Institute for Survey Research, in partnership with Robert Brym, S.D. Clark Professor of Sociology in the University of Toronto’s Faculty of Arts & Science, and Professor Rhonda Lenton, a sociologist who is president and vice-chancellor of York University, the study surveyed a representative sample of 2,335 Jews in Toronto, Montreal, Winnipeg and Vancouver, where 84 per cent of Canada’s Jews live.

Among many other things, “the survey indicates the general orientation that respondents have toward being Jewish – what they consider essential or important to being Jewish,” says Brym.

A copy of the 92-page report on the survey is available on the Environics Institute website.

The survey asked respondents to answer questions about participation in Jewish cultural traditions, belief in God or a universal spirit, marriage and the upbringing of children, prevalence of discrimination and harassment, political ideologies, association with Israel, participation in Jewish education, connection to local Jewish communities, knowledge of Hebrew and more.

“More secularized elements of Jewish communities are assimilating to the cultures of their country of residence at a fairly rapid rate,” says Brym. “The Canadian data suggests there is a vibrant community here that’s retained its cohesion pretty remarkably, much more so than in the U.S. or Russia, for example.”

Lenton’s speech at an event marking the release of the survey echoed this sentiment: “While analysts often claim that the non-religious Jewish diaspora is dissipating,” she says, “Canadian Jewry seems to be doing a good job of bucking the trend.”

While Lenton credits a strong institutional framework maintained by Canadian Jewish communities for what she and Brym call this “Canadian exceptionalism,” she also points to the influence of historical and political forces like the role of Canadian public policy in fostering the growth of ethnic institutions.

Moreover, because of the United States’ anti-colonial war and the strong American patriotism it produced, American Jews “developed a stronger national identity than Canadians did,” says Lenton. Therefore, American Jews were more hesitant to adopt the ideals of Zionism – the belief in the development of a Jewish state in what is now Israel – than Canadian Jews.

These and related factors “helped the Canadian Jewish community develop a stronger identity over the last century,” says Brym.

The future of Canada's Jewish community

A striking finding of the survey, says Brym, is that “Jews are three times more likely than non-Jews to think that Jews often experience discrimination.

“When most people think about discrimination, they think about groups that are underprivileged or have lower socioeconomic status,” explains Brym.

“But the Jewish population is very highly educated. So we’re a privileged group, and most people think, ‘If you’re privileged, how can you be discriminated against?’ But when Jews think of discrimination, they think of being snubbed and being criticized; they think of vandalism of Jewish property like graveyards and synagogues. They have in mind criticism for expressing support for the existence of the Jewish state.”

Brym highlights the need for education and changing public discourse about discrimination, particularly at a moment when we see an alarming rise in white nationalism and reported hate crimes in the U.S. and Canada against not only Jews, but other historically oppressed groups.

“It’s a matter of public policy,” he says. “What are we doing in the school system to teach kids about different kinds of discrimination?”

Pointing to potential future directions for the Canadian Jewish community, the survey found that the younger generation of Jews in Canada identifies more strongly with aspects of Jewish culture and community than strict religious observance and allegiance to Israel.

Brym thinks this is an important finding for community leaders and those who run programming and activities for younger Jews in Canada.

“If religion is not the principal focus for many younger people, and if Israel is less the focus, we have to ask: What kinds of activities need to be emphasized for a younger generation if we want to keep the community cohesive?”

“I’ve wanted to do this project for decades,” says Brym, who often discussed it with Lenton – the two are married. After meeting Michael Adams, founder and president of the Environics Research Group, at the annual S.D. Clark Symposium at U of T in 2016, serious discussions began. Soon, Keith Neuman, the Environics Institute’s executive director, joined the research team.

The survey was supported by Brym’s and Lenton’s research funds and donations from the Jewish communities of Montreal, Toronto and Winnipeg, as well as U of T’s Anne Tanenbaum Centre for Jewish Studies and Office of Advancement. In-kind support was provided by the Environics Institute, Brym, Lenton and York University’s Communications & Public Affairs Division.

Brym predicts the survey is only the start of more research, analysis and collaboration.

While the survey provides a useful description of Jews in Canada – their opinions, and associations between those opinions and other characteristics – there has not yet been sustained inquiry into why certain associations exist or how multiple causes could be influencing associations. Brym intends to tackle these and related questions over the next year.

“The principal investigators, social scientists from other universities and PhD students from U of T are going to be writing a series of academic articles on this survey,” he says.