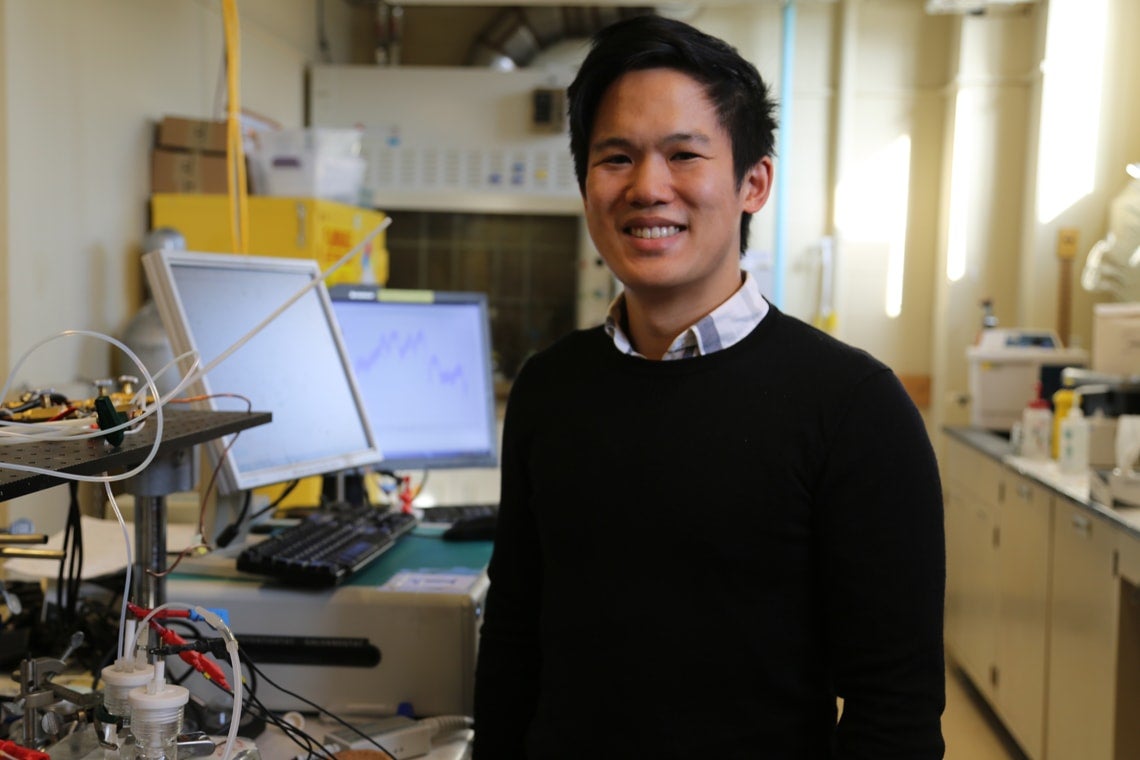 Alexander Ip and his U of T research team, led by Professor Ted Sargent has advanced to the second round of the $20-million Carbon XPRIZE competition (photo by Kevin Soobrian)

A team of researchers led by Professor Ted Sargent has moved on to the second round of the $20-million NRG COSIA Carbon XPRIZE. The international competition challenges teams to capture carbon-dioxide (CO2), a climate-warming greenhouse gas, from natural gas or coal power plant fuel emissions and convert it into valuable products.

U of T’s multidisciplinary team, called Carbon Electrocatalytic Recycling Toronto (CERT), submitted a technique they developed earlier this year to convert CO2 to carbon-monoxide using electrocatalysis. For the competition entry, the team has altered that technique by using nanoparticle-based catalysts to produce formic acid, a substance commonly used as a preservative for animal feed and within the textile industry.

“Basically, you take some of the hydrogen from water and connect it into your CO2 molecule to make your formic acid,” says Alexander Ip, director of research and partnerships for the Sargent Group. “But you can do different things. In principle, you can make any carbon-based product. The challenge is having the right materials to be able to selectively get what you want.”

Read about the technique the team developed earlier this year

Ip also noted that the method could be instrumental in closing the carbon cycle. Sargent and an international team of collaborators developed a highly efficient method for storing energy in chemical form earlier this year, raising the potential for intermittent, renewable power sources like solar and wind. This clean and renewable electricity is then used to capture and convert CO2 into an asset.

“One thing that is emerging right now that we think is interesting is using formic acid as a hydrogen fuel cell material,” says Ip.

Instead of storing a gas in pressurized tanks, hydrogen is stored within the formic acid liquid and released from there. This allows hydrogen to be safely stored and easily transported in a liquid form.

“It’s less developed, but we think it’s a way that the formic acid market might grow in the future,” Ip says.

The NRG COSIA Carbon XPRIZE launched last year, and CERT submitted its first round submission in July. They now have until August 2017 to prepare a submission for round two, in which teams must demonstrate an ability to scale their project. The team is currently working on less than a gram of CO2 in its experiments, but will have to reach a volume of 200 kilograms per day for round two.

“It’s a big jump, and I don’t think it’s something we would normally try to do in a year,” Ip says. “But, that’s what XPRIZE does – it challenges you to go for it.”

CERT chose formic acid as its product precisely because they anticipate that it will be easy to scale up, notes Ip. “Once we’ve gotten to scale, you can swap out the catalyst in your system to make a different product. It’s not quite that straightforward, but that’s the principle.”

The team of 20 includes researchers from across the university, many of whom came together through a $1-million grant from the University of Toronto’s Connaught Global Challenge Fund. Nanoparticle expert Professor Eugenia Kumacheva from the department of chemistry and fluidics specialist Professor David Sinton from the department of mechanical & industrial engineering are among the faculty members collaborating on the project.

The next step, says Ip, is making varied and more complex products, such as ethylene, from CO2. “We’re looking at how we can get two, or three, or more carbons linked together because that’s where you start getting more energy density and value in products.”

Round 2 of the Carbon XPRIZE will be judged in late 2017, with the top five teams in the natural gas and coal power plant streams sharing $2.5 million in prize money and advancing to the final round. Finalists will apply their methods to real power plants and be evaluated by both the amount of CO2 they are able to convert, and the net value of their final product.

“It’s a big challenge for us, but we want to see where it goes,” says Ip. “We think it’s a very important problem being addressed in this competition, and we’re happy to be a part of it.”