Converting a greenhouse gas into something good: U of T researchers recycle carbon dioxide 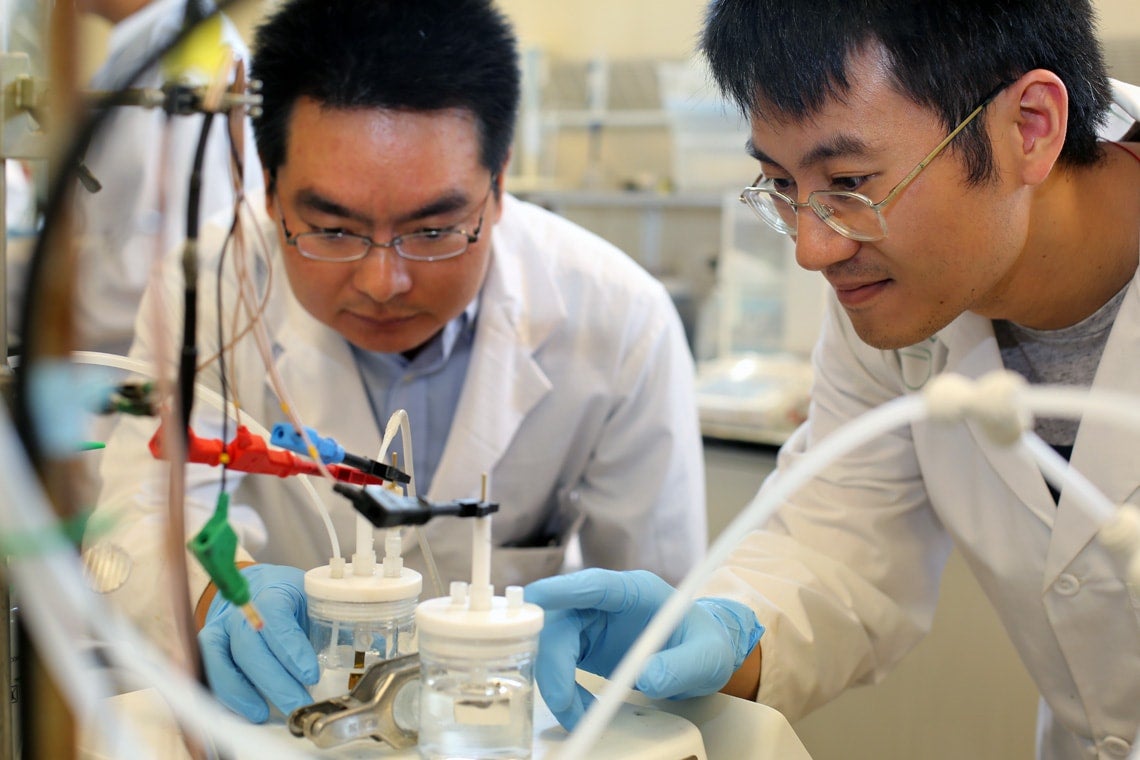 Turning carbon dioxide into stored energy sounds like science fiction: researchers have long tried to find simple ways to convert this greenhouse gas into fuels and other useful chemicals.

Now, a group of researchers led by Professor Ted Sargent of the University of Toronto’s Faculty of Applied Science & Engineering have found a more efficient way – through the wonders of nanoengineering.

Researchers Min Liu and Yuanjie Pang, along with a team of graduate students and post-doctoral fellows in U of T Engineering, have developed a technique powered by renewable energies such as solar or wind. The catalyst takes climate-warming carbon-dioxide (CO2) and converts it to carbon-monoxide (CO), a useful building block for carbon-based chemical fuels, such as methanol, ethanol and diesel.

“CO2 reduction is an important challenge due to inertness of the molecule,” says Liu. “We were looking for the best way to both address mounting global energy needs and help the environment,” adds Pang. “If we take CO2 from industrial flue emissions or from the atmosphere, and use it as a reagent for fuels, which provide long-term storage for green energy, we’re killing two birds with one stone.”

The team’s solution is sharp: they start by fabricating extremely small gold “nanoneedles” — the tip of each needle is 10,000 times smaller than a human hair.

“The nanoneedles act like lightning rods for catalyzing the reaction,” says Liu.

When they applied a small electrical bias  to the array of nanoneedles,  they produced a high electric field at the sharp tips of the needles. This helps attract CO2, speeding up the reduction to CO, with a rate faster than any catalyst previously reported. This represents a breakthrough in selectivity and efficiency which brings CO2 reduction closer to the realm of commercial electrolysers.  The team is now working on the next step: skipping the CO and producing more conventional fuels directly.

Their work is published in the journal Nature and making news around the world.

“The field of water-splitting for energy storage has seen rapid advances, especially in the intensity with which these reactions can be performed on a heterogeneous catalyst at low overpotential — now, analogous breakthroughs in the rate of CO2 reduction using renewable electricity are urgently needed,” says Michael Graetzel, a professor of physical chemistry at École Polytechnique Fédérale de Lausanne and a world leader in this field. “The University of Toronto team’s breakthrough was achieved using a new concept of field-induced reagent concentration.”

“Solving global energy challenges needs solutions that cut across many fields,” says Sargent. “This work not only provides a new solution to a longstanding problem of CO2 reduction, but opens possibilities for storage of alternative energies such as solar and wind.”

This work was sparked by a $1-million grant from the University of Toronto’s Connaught Global Challenge fund, which united the multidisciplinary team to develop new bio-inspired energy conversion techniques. The project leveraged expertise from across the University of Toronto, including Professor Eugenia Kumacheva in the department of chemistry, Professor Shana Kelley in the Faculty of Pharmacy, and Professor David Sinton in the department of mechanical and industrial engineering.

Sargent’s research was further supported with the help of SOSCIP’s Blue Gene/Q, Canada’s fastest supercomputer, responsible for large scale parallel processing and grand challenge computational science. SOSCIP is a research and development consortium which pairs academic and industry researchers with advanced computing tools to fuel innovation leadership in Canada. U of T is a founding member of the consortium which includes the Ontario Centres of Excellence, IBM and 15 academic institutions. SOSCIP also provided funding to support a postdoctoral fellow for the project.

Read more about SOSCIP at U of T