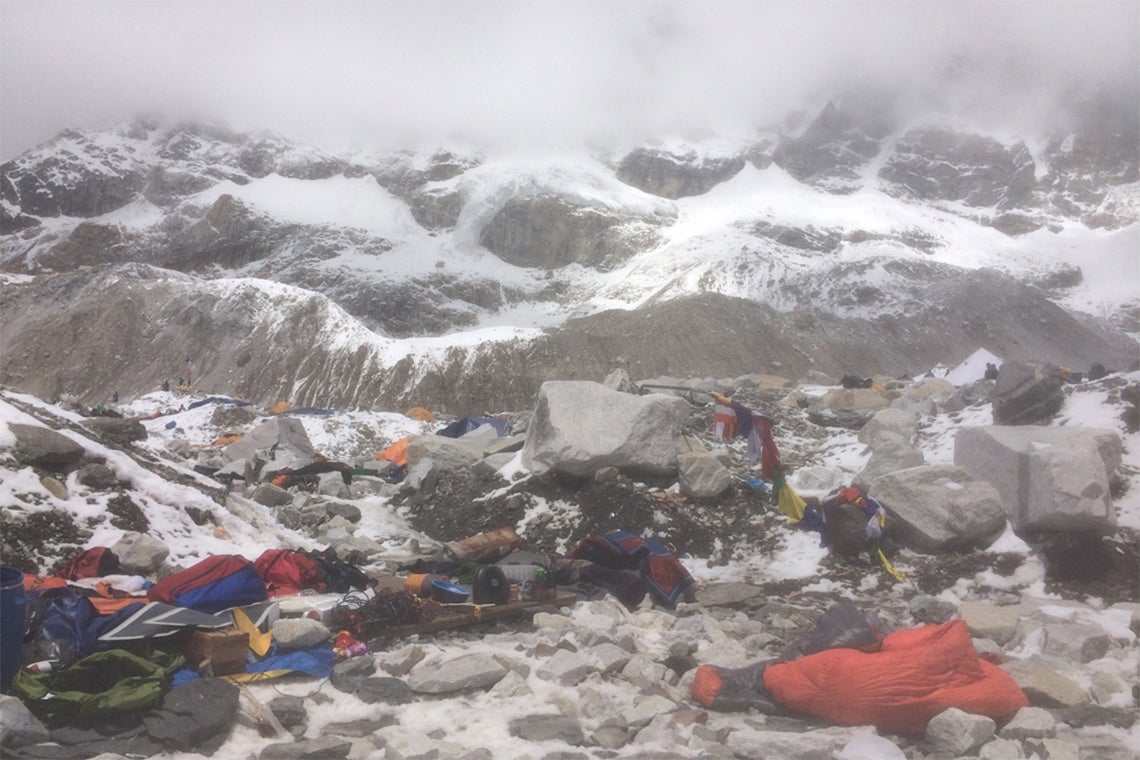 A photograph taken from Everest Base Camp shows the devastation resulting from a deadly avalanche on April 25, 2015 that was triggered by an earthquake (photo courtesy of R. Tullet)

On the afternoon of April 25, 2015, an earthquake rocked the Himalayas, causing widespread death and damage in the region. The magnitude 7.8 quake – the strongest ever recorded in the region – rattled glaciers and ice falls along a ridge just to the west of Mount Everest, sending an avalanche of ice and snow hurtling towards the base camp below. When the snow settled, 15 were dead and scores more were injured in what would become the deadliest day on the world’s highest mountain.

Now, new research from the University of Toronto is helping to explain what happened that day, revealing a growing risk of more deadly accidents in the future.

Kent Moore, a physics professor at U of T Mississauga, studies climate conditions in the world’s most northerly and remote locations. Over the past 15 years he has collaborated with fellow climber John Semple, a surgeon at Toronto’s Women’s College Hospital and a professor at the Temerty Faculty of Medicine, to study how weather conditions affect the health and safety of climbers in the Himalayas.

For their latest study, published in High Altitude Medicine & Biology, Moore and Semple sought to better understand the conditions that led to the deadly 2015 avalanche. Their findings reveal that the 2015 earthquake triggered “a swarm of avalanches” and raise questions about the impact of climate change, as well as the need for improved modelling and forecasting in the region.

Danger on the Khumbu Glacier

Everest’s south base camp is located on the Khumbu Glacier, a flat plain on the Nepalese side of the mountain below the peaks of nearby Pumori, Lingtren and Kala Patthar. The pop-up tent city serves as a central hub for the 40,000 climbers and hikers who visit the area annually, as well as the porters and guides who support them.

Moore, who has trekked the Khumbu Valley three times, has witnessed a deadly avalanche there first-hand. In 2009, he was about 10 kilometers from the south base camp with his party when they spotted a plume of snow and ice in the distance. “When we got to base camp the next day, we learned there were three Sherpas lost,” he says.

“There’s a risk whenever you climb in this region that there is the potential for these avalanches,” he says.

Everest and the surrounding peaks are home to glaciers and steep ice falls, which hang off the side of the mountains like frozen waterfalls. Evidence of avalanches are marked by massive mounds of snow known as “avalanche cones” that occur where ice and snow have tumbled from above.

Despite the common occurrence of avalanches in the region, Moore says that little is known about their intensity or the stability of the glaciers that ring Khumbu Valley. 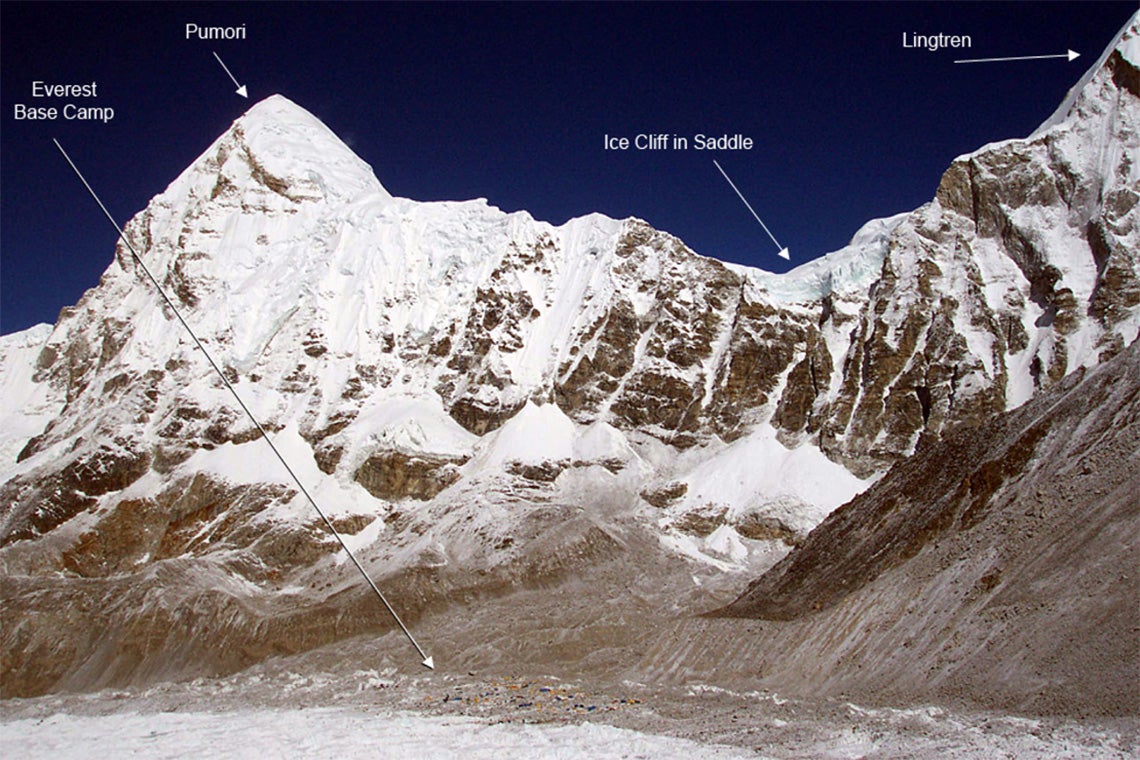 Tiny tents of the south Everest base camp show the scale of the massive piles of snow and ice known as “avalanche cones” that pour off the ridge between Lingtren and Pumori (photo courtesy of E. Simonson)

The source of the 2015 avalanche was a ridge between Pumori and Lingtren, about 900 metres above the camp. Working backwards, the researchers analyzed solar and wind data collected from weather stations located on Kala Patthar, another summit about 4 kilometres from the ridge. They discovered intriguing anomalies that help tell the story of what happened that day.

“It got really dark for a short period of about three or four minutes,” Moore says. “We interpret that to be [caused by] a giant plume of snow and ice crystals that moved past the weather station, so there was a reduction of solar radiation that was getting to the site.

“It happened really, really quickly. The amount of radiation was halved in 20 to 30 seconds. It speaks to the huge size of the cloud that it was sufficient to cause it to get dark at the station.”

The weather station also recorded bursts of gusting winds of variable speeds that changed directions. “We interpret that as being the sort of a chaotic wind field associated with an avalanche,” says Moore. “The wind was never blowing in one direction.”

The data showed three pulses where wind blew down the valley, suggesting three distinct avalanches separated by a few minutes – or what Moore refers to as a “swarm” of avalanches.

“No one on the ground noticed, because it was so chaotic,” he says. “But looking at this weather station data, it’s convincing that there were three of them.”

Moore says the findings of the avalanche study underscores the effect that climate change is having on the region, and the risk for future avalanches.

Since the 1980s, the average temperature in the region has increased by 1 C and the elevation of the freeze line, where the ground is frozen solid, has moved up 800 metres. Glaciers are also showing effects of warming.

“Glaciers are a really good marker for climate change because they don’t retract from year to year, but over decades,” says Moore. “Glaciers in the region are retracting up the valley. There’s concern that these glaciers that ring the Khumbu Valley are becoming more unstable and that in the future we will see more of these collapses.”

He suggests that it may be time to relocate the base camp out of harm’s way.

“That there were three avalanches tells us that the ice on the ridge is probably pretty unstable. We could see more avalanches coming from that direction.” 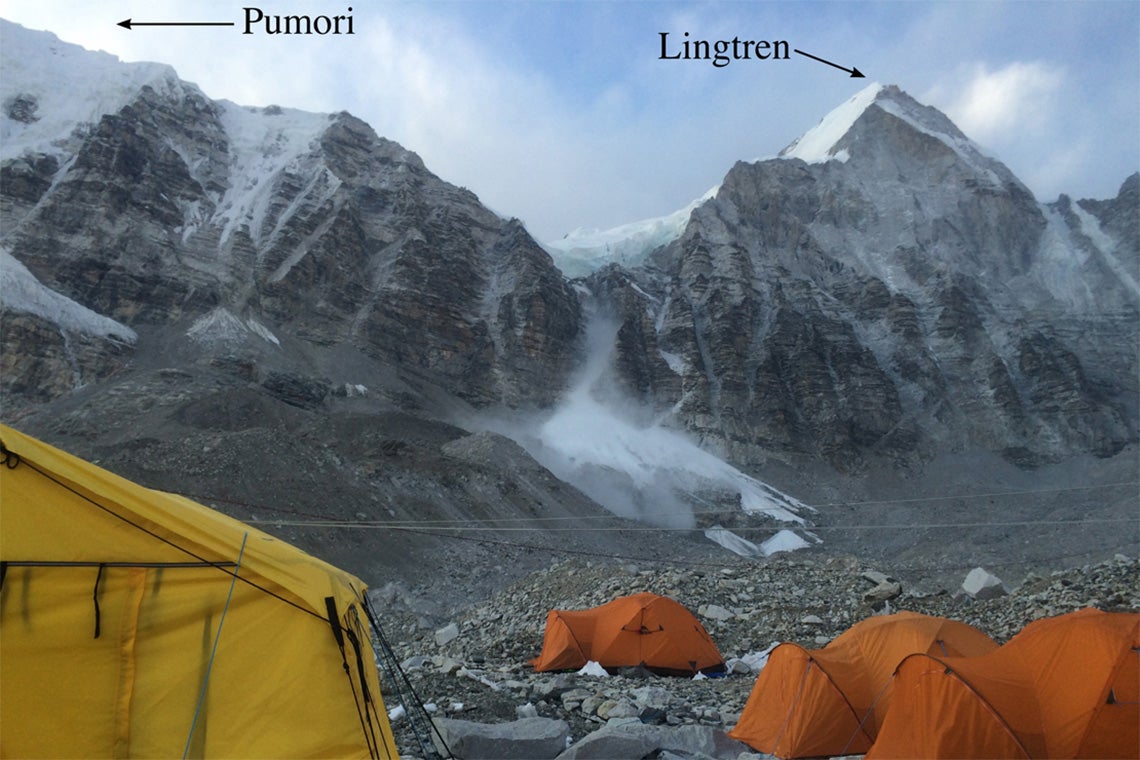 A plume of snow wafts from a minor avalanche that originated along the ridge between Pumori and Lingtren (photo courtesy of R. Tullet)

In a 2008 study, Moore and Semple analyzed Everest mortality data going back to the 1920s. While Western climber deaths occurred most often during descent from the peak, Sherpa deaths typically occurred lower on the mountain due to accidents like avalanches.

“Western climbers couldn’t survive without the incredible support of the Indigenous Sherpas and porters,” says Moore, adding that Nepalese locals work as guides and porters for foreign climbers by ferrying gear up and down the mountain – often without the aid of safety gear. “It’s very dangerous.”

“This whole enterprise is based on people putting their lives at risk and it’s really the Indigenous people of Nepal who are bearing those risks. Hopefully, this work will mitigate future loss of life in the region.”

The research was supported by the Fulbright Canada Foundation and the Natural Sciences and Engineering Research Council of Canada.