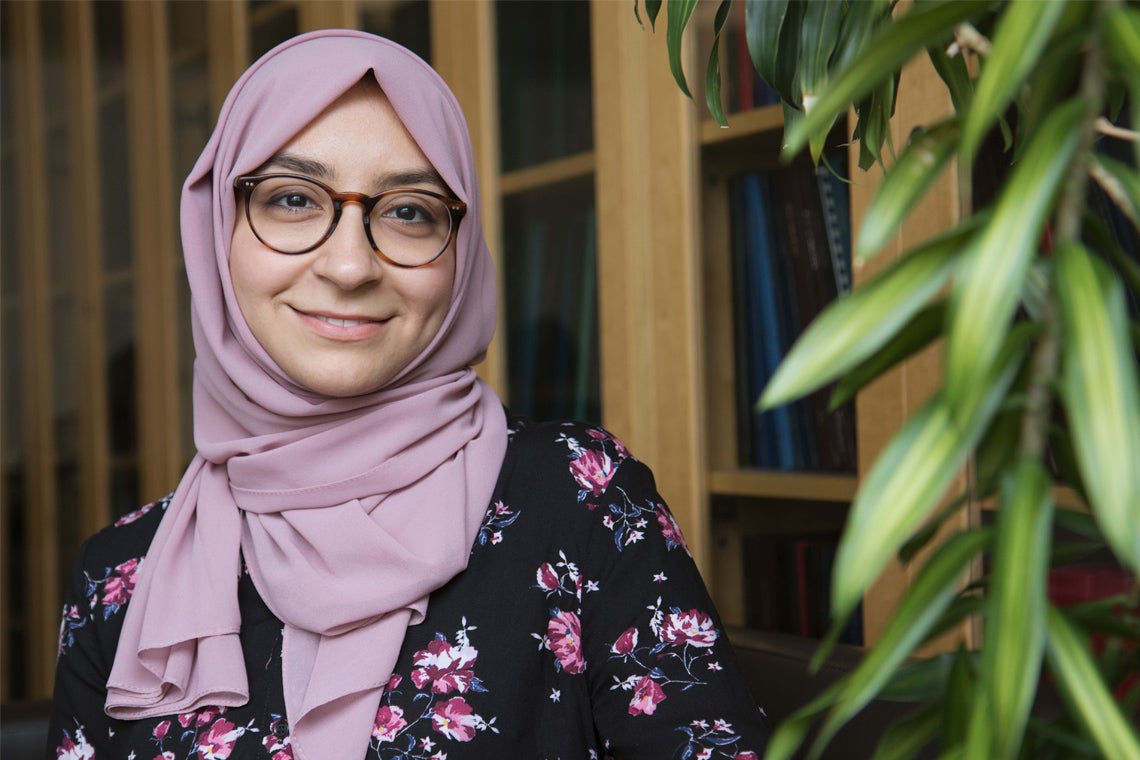 Hafsah Siddiqui will be heading to Cambridge University in the U.K. on a full scholarship in September (photo by Romi Levine)

When choosing the next cohort of students to receive a full scholarship to Cambridge University, the Gates Cambridge Trust has very specific criteria – including an “outstanding intellectual ability,” but also leadership potential and “a commitment to improving the lives of others.”

Hafsah Siddiqui embodies all of those qualities. The geography and planning master’s student, who will be graduating from the University of Toronto in the fall, has been awarded a Gates Cambridge Scholarship to earn a PhD at Cambridge.

“It's amazing. I still can't believe it, to be honest,” Siddiqui says.

The Gates Cambridge Scholarship Program was launched in 2000 with a $210-million donation from the Bill & Melinda Gates Foundation. This year, the program is providing 90 postgraduate scholarships to students from 37 countries with expertise in fields ranging from cybersecurity to human trafficking.

“The Gates Cambridge Scholars are an extraordinary group of people,” Toope said in a news release announcing the 2019 scholars. “Not only have they demonstrated outstanding academic abilities in their field, but they have also shown a real commitment to engaging with the world – and to changing it for the better.”

At Cambridge, Siddiqui will continue the research she began at U of T on housing inequality in Pakistan, focusing specifically on informal settlement communities in Islamabad.

“Cities are really important places to research and what really interests me is that they're spaces of opportunity, experience, diversity and culture, but then they are also spaces of deprivation and inequality,” says Siddiqui. “So I want to see how we can make cities more equitable and more accessible and more inclusive.”

Islamabad’s informal settlements, known as katchi abadis, are makeshift neighbourhoods often consisting of mud huts and populated by the marginalized groups like refugees.

“My work in Islamabad will be around informal settlement dwellers who are facing the threat of state-led evictions and how well-off people living in the city can actually make connections with those people to help them remain in the city,” says Siddiqui.

She says the state is evicting people from these settlements to use the land to build profitable commercial and residential properties.

As part of her research, Siddiqui will be conducting fieldwork in Islamabad, where she’ll meet with some of the organizations that are advocating for residents of the katchi abadis.

“They are led by middle- and upper-class residents who want to do what I'm doing, to make cities places of togetherness and collaboration,” she says.

Siddiqui’s research will bring about a homecoming of sorts. She was born in Islamabad, but spent most of her life in the Middle East, until she came to U of T for her undergraduate and master’s degrees.

“I felt that it would be nice to go back home and see what difference I could make.”

She also wants to turn the spotlight on what’s called the “Global South” – a term used to describe middle- and low-income countries (whereas the “Global North” refers to the world’s wealthier countries).

She says there’s a tendency to refer to countries in the Global South, like Pakistan, as underdeveloped and in need of help.

“But that's not true,” says Siddiqui. “There's a lot that's happening there that deserves to be researched. And it seems like the solutions aren't going to come from foreign aid, they’re going to come from within, which is why there are all these organizations within the countries that are trying to find these urban solutions.”

Her interest in exploring housing inequality was sparked at U of T.

“I lived in seven different cities across four different countries, and so inequality was at the back of my mind,” she says. “But if U of T hadn't offered this wide variety of urban geography courses – I took courses on urban social exclusion, on marginalization, globalization and urban change – without those I would've never gotten to where I am.”

She also credits U of T faculty members for their “unwavering support,” including Professors Deborah Leslie and Lorne Tepperman and Associate Professor Matthew Farish, as well as her graduate supervisor, Assistant Professor Michelle Buckley, who “was always my cheerleader the whole way through.”

Buckley, in turn, says Siddiqui was “the kind of student who was a dream to work with.

“She is impeccably organized, she's incredibly focused and she approaches her work with a degree of commitment and seriousness that is really commendable.”

While Buckley says Siddiqui is very modest, she says she’s also very driven – going to great lengths, for example, to prepare for her interview as part of the Gates Cambridge application process.

“She had multiple mock interviews and she looked up who everyone on the education committee was going to be,” says Buckley.

As Siddiqui prepares for her big move to England in September, she says she’s most looking forward to experiencing a different kind of atmosphere – and partaking in a well-known Cambridge pastime: “I'm really excited to get into rowing.”