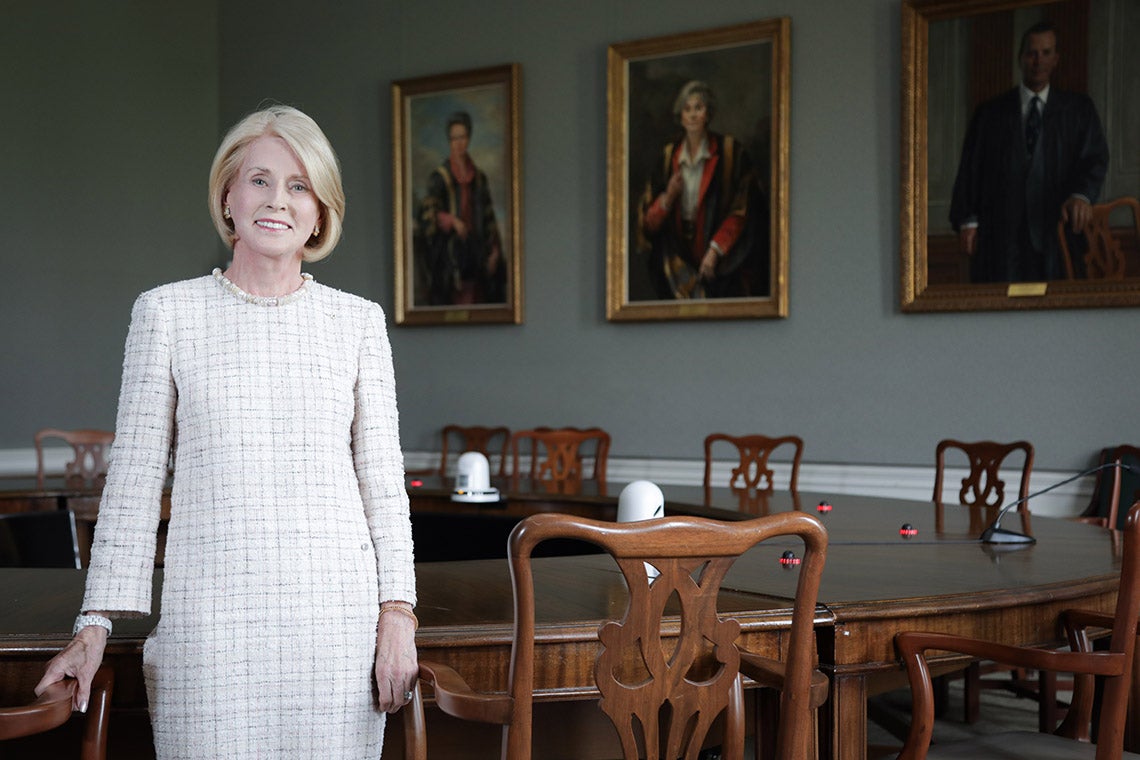 Rose Patten says she hopes to leverage her 30 years of experience working at the intersection of business, academia and the public sector to help promote U of T’s mission on a global stage (photo by Lisa Lightbourn)

Rose Patten was on her way to a celebratory dinner in 1983 when disaster struck.

Recently promoted to vice-president at a Toronto bank – unusual for a woman at the time – she was hit by a car while attempting to cross University Avenue. The impact sent her flying 30 feet and shattered her hip.

Her doctors said she would never walk again.

“Who knows what motivates you,” Patten says when asked about the incident during a wide-ranging interview. She not only defied her physicians’ gloomy prognosis, but went on to become a marathon runner – all while scarcely missing a day of work.

The accident, and Patten’s response to it, offers a rare glimpse into the personal mettle of the University of Toronto’s 34th chancellor, who is in Ottawa today to be invested as an Officer of the Order of Canada.

It also helps explain how Patten managed to scale Bay Street’s gleaming office towers to capture a coveted spot among the executive ranks at a time when it was widely considered an old boys’ club. Once recognized by U.S. Banker Magazine as one of the industry’s 25 most powerful women, Patten has simultaneously held the positions of executive vice-president of business strategy and executive vice-president of global human resources at BMO Financial Group, where she remains as special adviser to the CEO and senior executives.

At U of T, meanwhile, Patten has spent nine years on Governing Council, including three years as chair, and is an adjunct professor and executive in residence at the Rotman School of Management.

Patten says she hopes to leverage her 30 years of experience working at the intersection of business, academia and the public sector to help promote U of T’s mission on a global stage.

“I want to be really connected with what’s going on – in addition to the ceremonial part,” she says, referring to the chancellor’s role in presiding over convocation ceremonies and acting as an ambassador to the alumni community.

“That really pushes my buttons and makes me really passionate – to be part of an organization that has such far-reaching impact.” Born in St. John’s, Nfld., Patten arrived on Bay Street very early in her career. She was first hired by Continental Bank of Canada, which, at the time, was undergoing a complex merger process that eventually saw it absorb its parent company.

Patten says working at Continental provided her with a rare front row seat to bank-building – an experience that would ultimately serve as a springboard for her young career.

“Who, in a financial institution, would get five or six years setting up a bank – both planning the strategy, hiring and setting it all up?” she says. “You’re dealing with mergers and disposing of companies. It was an enormous depth of activity ... I was lucky to have been there.”

Her run-in with a car on University Avenue was far less lucky, of course. While Patten rarely talks publicly about the accident, she nevertheless concedes it was defining moment of her life.

When the doctors expressed doubts about her ability to fully recover, Patten says she bluntly told them it was not their decision to make. “It was kind of cheeky,” she now admits.

Facing a long road of healing and physiotherapy, Patten made a pact with herself to run a marathon on the 10-year anniversary of the accident. In the meantime, she told Continental’s president he could help by paying for a private room so she could continue working.

Patten spent the next three months conducting the bank’s human resources affairs from her hospital bed. Assisted by a runner who ferried documents back and forth from the bank, Patten proceeded to interview and hire candidates for senior positions, as doctors and nurses tended to other patients a few feet outside her door.

“The doctor would come by and say, ‘We didn’t come in earlier because you were in a meeting,’” Patten recalls with a laugh.

As Patten’s recovery progressed, so did her career. Seeking international experience, she accepted a job as a senior vice-president at Manulife, where she helped the Canadian insurance giant set up operations in a half dozen Asian countries.

Next, she took a position with former investment bank Nesbitt Thomson – just as all of Canada’s big banks rushed to get into the sector, setting off a flurry of mergers and acquisitions.

“One of the reasons I got looked at is because I had experience putting things together,” Patten says.

If Patten’s accomplishments in the high-pressure financial service sector weren’t enough, she also took on significant volunteer and other work in the public realm. That includes serving as chair on the board of trustees of the Hospital of Sick Children and being a founding director of Metrolinx, the provincial agency responsible for transportation in the Greater Toronto and Hamilton Area.

“Almost since my 20s, I was engaged in some serious non-profit work,” she explains, adding that her passion for the public sector is ultimately what led to her decades-long relationship with U of T.

That was also around the time Patten made good on a decade-old promise to herself: She ran in the 1995 New York City Marathon, finishing with a respectable time of four hours, 25 minutes and 23 seconds.

How did she manage it all? Hard work and a refusal to mentally succumb to the barriers she faced as a woman.

“I think I worked very hard – probably harder than I needed to at times – to show I was good or that I could do it,” she says.

“But I never allowed it to depress me, get me down, or make me angry or cynical.”

Patten displays a similarly positive outlook when asked for her thoughts on U of T’s role in Canada and beyond at a time when the world is experiencing political, economic and social upheaval. She has seen its rise as a key centre for innovation in transformative fields like artificial intelligence, regenerative medicine and sustainable technologies. And she notes that there is also a growing need for U of T’s deep expertise in disciplines like philosophy, history or women and gender studies to help make sense of the human implications of so much rapid change.

“Our strength at U of T in the humanities and social sciences will serve us extremely well – and will be key to our overall impact,” she says.

“I think we can a be a role model and bring clarification to the ambiguity around the place of human values in our culture, because everything that’s going on has created a lot of confusion.”

Ultimately, Patten says that as chancellor she hopes to inspire U of T students, faculty, staff and alumni in the same way they’ve inspired her for over two decades.

“It’s an organization that I’ve known from up close for 25 years,” she says. “I’ve seen its first-class talent and enormous achievements.

“Now, to be able to play a new role in promoting U of T, Canada’s leading university, and one of the world’s very best – my gosh, how fortunate I am to have this honour.”