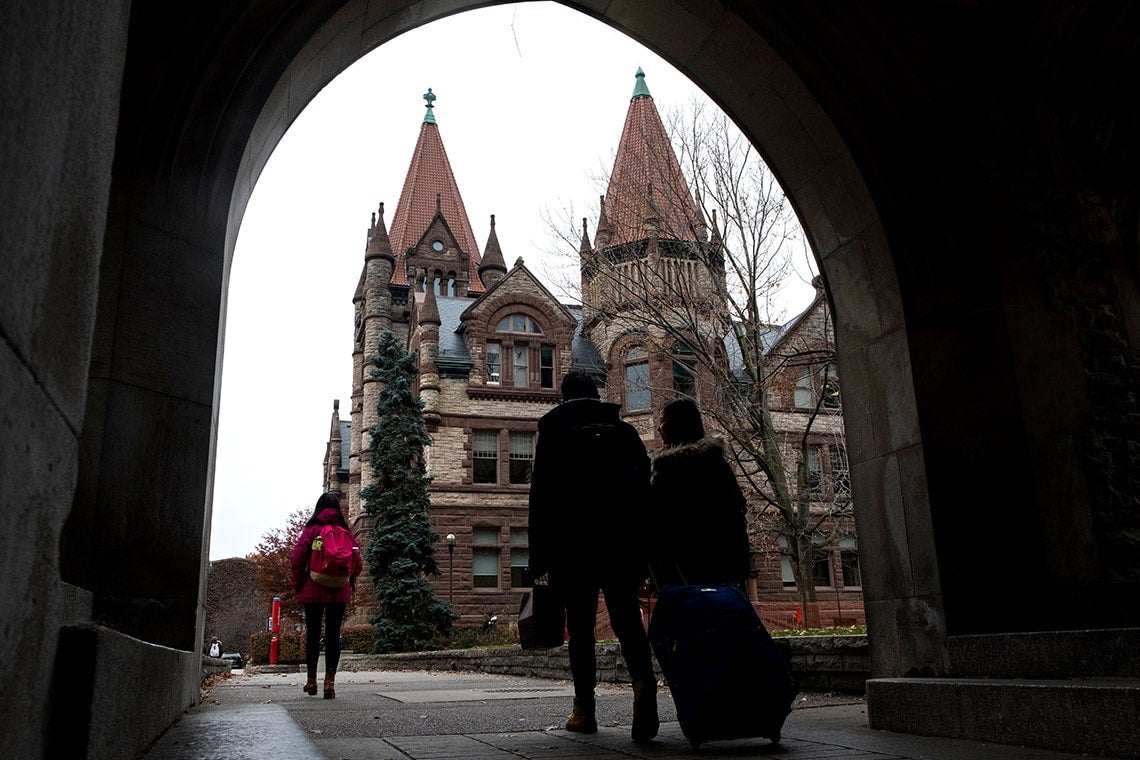 The balanced budget for 2019-2020, approved by Governing Council today, includes $2.77 billion in spending during the upcoming fiscal year, an increase of 3.5 per cent over the previous year.

That’s notably less than earlier projections that had the budget growing by 5.2 per cent, based on assumptions the former tuition framework would remain in place.

“The University of Toronto will continue to invest in the people, programs and physical infrastructure necessary to support a world-leading academic and research experience,” said Cheryl Regehr, U of T’s vice-president and provost.

“But the financial constraints we are facing mean we won’t be able to accomplish everything we had originally planned.”

The Ontario government’s tuition cut, announced in late January alongside changes to the Ontario Student Assistant Program (OSAP) and a new opt-out program for ancillary student fees, resulted in a revenue reduction of about $65 million for the university compared to the current fiscal year, according to U of T’s latest budget report. However, since the previous tuition framework allowed for annual three-per-cent increases, the university was expecting $88 million more in revenue than it will now receive.

That said, overall enrolment-related revenue, including student fees and operating grants, is projected to increase 2.9 per cent to $2.4 billion in the upcoming year.

U of T has committed $7.1 million in the upcoming budget – money that might have otherwise been invested in new strategic initiatives – to help academic divisions most deeply affected by the tuition fee changes.

“We’re using this structural budget support to level everyone out so no division has to take more than a three-per-cent cut this year,” Regehr said.

Despite the challenges, U of T will nevertheless continue to fund a number of its academic and other strategic priorities at the downtown Toronto, Scarborough and Mississauga campuses.

They include adding new degree programs, taking further steps to diversify U of T’s international student population and transferring $6.7 million from the university’s operating reserves into a donation-matching endowed fund that will be used to support students participating in international experiences.

Many university divisions will continue to grow. There are plans to hire 51 additional faculty members in 2019-2020, although the budget report suggested some of those new hires may be delayed due to the changes in the domestic tuition fees framework.

Thanks to $1.5 million in support though the third phase of the Diversity in Academic Hiring Fund, as many as 20 Black and Indigenous faculty are expected to be hired across the university. They will join 60 other faculty members from underrepresented groups who were added through the first two phases of the same initiative.

There are also plans to spend, via the University Fund, $4 million to renovate student-focused facilities across U of T’s three campuses, $750,000 to upgrade the Lawrence S. Bloomberg Faculty of Nursing’s nursing simulation lab and another $750,000 to make space improvements to First Nations House.

When it comes to research, U of T plans to spend $2.75 million to “support research excellence in areas of strategic importance.”

Trevor Rodgers, U of T’s assistant vice-president of planning and budget, said one area that’s facing budget reductions is the university’s shared services.

“We were not able to make as many shared service investments as we would have otherwise done,” Rodgers said.

Instead, the university has focused spending on services that help generate new revenue or cost efficiencies. Examples include: staffing, programs and IT infrastructure aimed at expanding future fundraising efforts; efforts to build a comprehensive talent management strategy; and a plan to modernize the university’s aging administrative management system.

Several major capital projects are planned over the next five years, according to the budget report.

They include academic projects – from a second instructional centre at U of T Scarborough to a proposed new building at 90 Queen’s Park that will house U of T’s new School of Cities alongside other academic units – and projects that provide campus amenities for students, faculty and staff.

The latter category is covered under U of T’s four corners strategy, which aims to leverage the university’s real estate holdings to generate as much as $50 million a year in operating revenue by 2033 through the development of 3.5 million square feet of campus services, amenities, office and retail space.

One example of such a project is the new Schwartz Reisman Innovation Centre on College Street. Scheduled to begin construction later this year, the centre will eventually comprise 750,000 square feet of space to house U of T startups, innovation partners and researchers focused on fields like artificial intelligence and regenerative medicine. The project is being supported by a recent $100 million gift by Onex founder and CEO Gerry Schwartz and Indigo founder and CEO Heather Reisman – the largest-ever donation in U of T’s history.

“We are building for the future,” said Scott Mabury, the university’s vice-president of operations and real estate partnerships.

“The investments we’re making today will pay off many times over in the decades to come – not just for U of T, but for the broader Ontario and Canadian economies.”

As for student enrolment, the university is in its third year of a strategic mandate agreement with the province. The agreement specifies that domestic undergraduate enrolment at U of T Mississauga and U of T Scarborough will be held constant in the upcoming academic year and reduced at the downtown Toronto campus. Overall, total domestic undergraduate enrolment is scheduled to decrease by just over two per cent by 2023-2024 to 45,884 students.

Making good on its promise to ensure student access despite the recent OSAP changes, the university is planning to spend $247 million on student aid in the upcoming academic year, according to the budget report.

“We have a strong commitment to student aid and ensuring that all qualified domestic students at the university can complete their studies,” Regehr said.