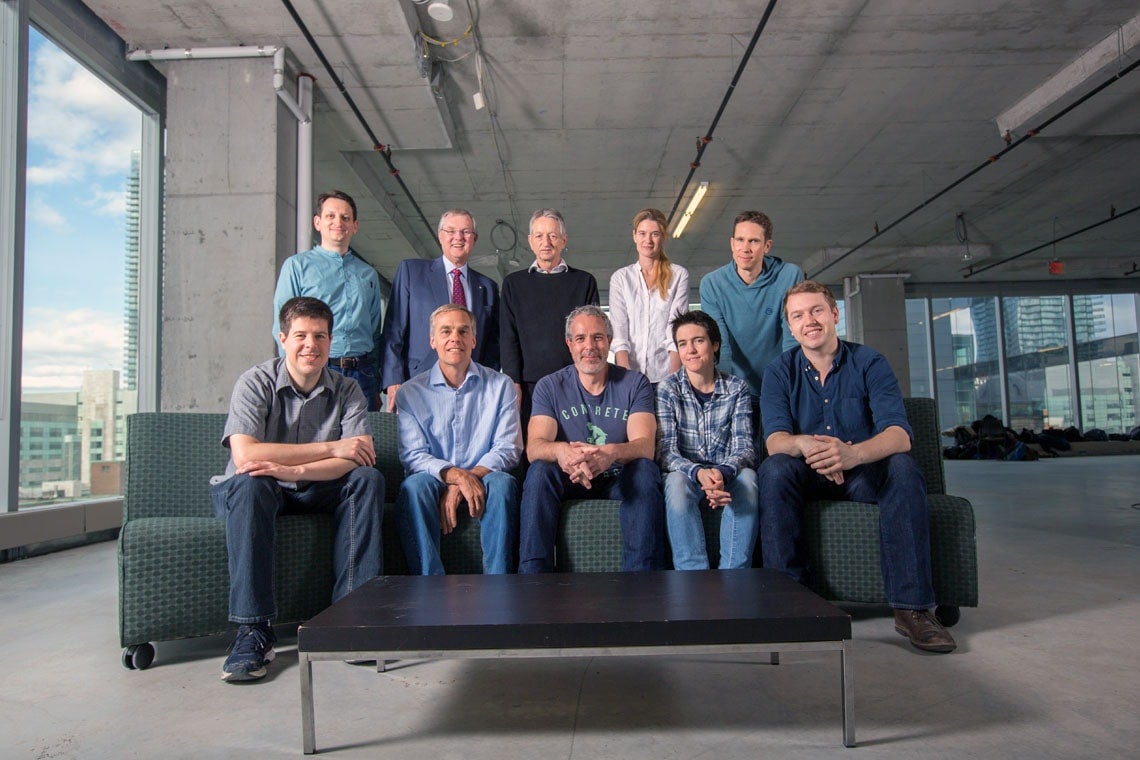 U of T researchers core of new independent centre

A team of globally renowned researchers at the University of Toronto is driving the planning of a new institute staking Toronto’s and Canada’s claim as the global leader in AI.

Geoffrey Hinton, a University Professor Emeritus in computer science at U of T and vice-president engineering fellow at Google, will serve as the chief scientific adviser of the newly created Vector Institute based in downtown Toronto.

“The University of Toronto has long been considered a global leader in artificial intelligence research,” said U of T President Meric Gertler. “It’s wonderful to see that expertise act as an anchor to bring together researchers, government and private sector actors through the Vector Institute, enabling them to aim even higher in leading advancements in this fast-growing, critical field.”

Read more at The Toronto Star

Read more at The Globe and Mail

As part of the Government of Canada’s Pan-Canadian Artificial Intelligence Strategy, Vector will share $125 million in federal funding with fellow institutes in Montreal and Edmonton. All three will conduct research and secure talent to cement Canada’s position as a world leader in AI.

In addition, Vector is expected to receive funding from the Province of Ontario and more than 30 top Canadian and global companies eager to tap this pool of talent to grow their businesses. The institute will also work closely with other Ontario universities with AI talent.

Read more at the BBC

After decades of being on the “lunatic fringe” pursuing an area of artificial intelligence known as neural networks, Hinton, his colleagues and former students are experiencing an abrupt and transformative reversal in fortune. They are now part of an incredibly in demand “lunatic core.”

Everyone is vying for their talents, from fellow universities to AI startups to the giants of Silicon Valley. Statistics show 100 per cent of graduates from U of T’s master’s in applied computing program find employment. Virtually all PhD grads are leaving Canada.

South of the border, U of T alumni and former faculty can also be found leading AI divisions at Google, Apple, OpenAI and Facebook. Here at home, they’re also creating their own startups like Layer6 AI, WinterLight Labs and Deep Genomics, fuelling local demand for the same talent pool.

Hence the need for the Vector Institute.

“If we don’t create this now, basically we’re going to miss the boat in the revolution of AI. It’s actually critical for this to [have] started yesterday,” says U of T computer science associate professor Raquel Urtasun, the Canada Research Chair in Machine Learning and Computer Vision.

The goal, the researchers say, is to have Vector serve as both beacon and magnet – to attract and retain talent to fill the needs of local businesses, support AI startups and show Toronto is serious about capitalizing on its reputation as a global leader in deep learning to push the science towards the next made-in-Canada breakthrough.

In particular, Vector funding will help train a huge new contingent of PhD students – some say the most of any institution anywhere – to fill booming demand.

Vector’s formation is a dream come true for the U of T machine-learning group, says U of T Computer Science Professor Richard Zemel, who is also the institute’s research director.

“It’s the right time to capitalize on that [group’s expertise] and grow,” said Zemel. “There’s a lot of research that goes on here that is a seed for the new wave that’s going to come in. . . . My strong feeling is that if we hire more people, then we’re going to be able to grow and lead that new wave of research.”

Brendan Frey, a U of T professor in electrical and computer engineering, and founder of AI startup Deep Genomics, agreed.

“I think in the next 10 to 20 years almost all aspects of Canadian society will be impacted by artificial intelligence from farming to medicine to education,” he said. “Artificial intelligence is the best way to interpret data and then make rational, good choices. As the amount of data grows in all areas of society, AI will play a crucial role in making that happen. You can think of AI as a pervasive technology that’s going to make life better across the board in all aspects of society.”

In the area of self-driving vehicles alone, the Vector Institute is to have a huge impact, which is important for the Ontario automotive sector.

“We basically develop the brain of the car where it has to transform what it sees into an explanation of what it is seeing,” she explains. “Basically, all the technology that is going to come out of Vector will be directly applicable to self-driving cars. It’s going to provide an incredible talent pool for companies that are going to work in the automotive sector.”

The creation of the Vector Institute couldn’t have come at a more important time. Toronto and Canada are in a way at a tipping point as the world races to lead in this.

“Canada has been very strong in AI historically,” Frey said. “But in the last 10 years . . . AI expertise has started flowing to locations that are more strongly supporting applications of AI to society – and that has been outside of Canada.

“It’s really important now that we regain that strength, that we refocus our excellence in artificial intelligence and in deep learning in particular, and also ensure we can make direct connections to applications that will change society.

“That’s what the Vector Institute is all about – to make sure there are collaborations between the researchers and industry, whether it’s startup companies, scale-up companies or big business.”

Read about the six degrees of separation from Hinton