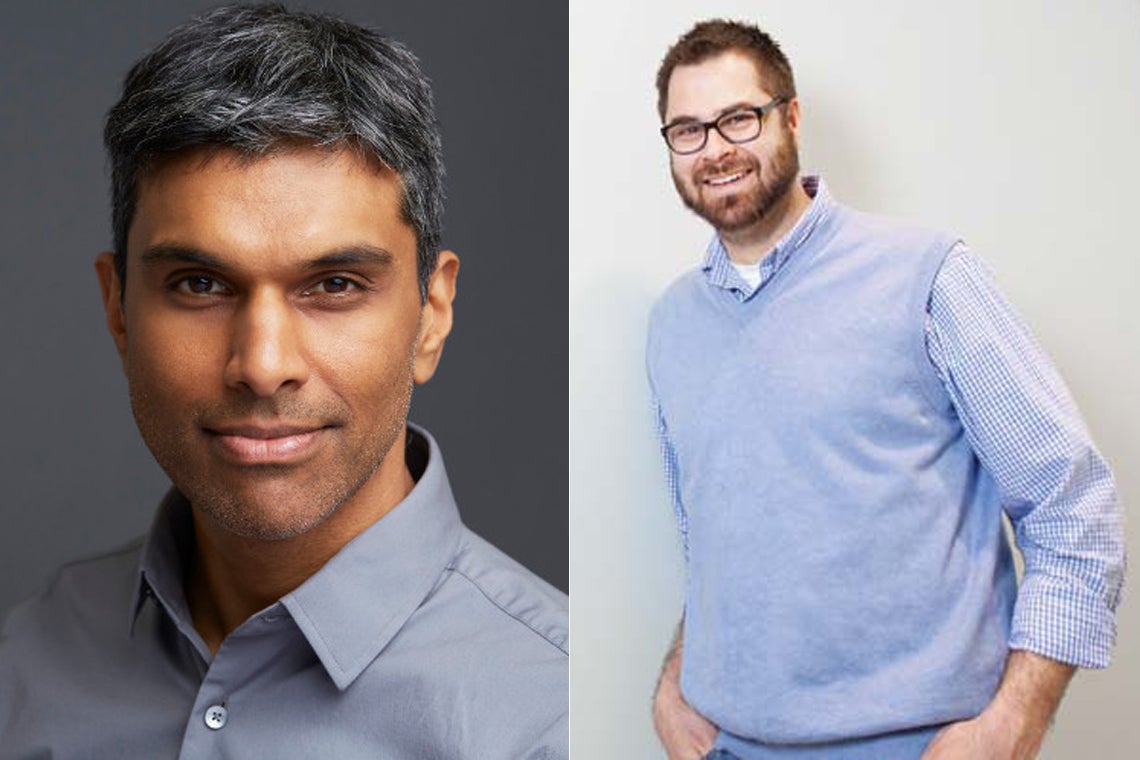 In most cases, they develop without you knowing it. There are usually no symptoms. And if they burst, only 30 per cent of victims survive. Even if they are discovered before rupturing – because of medical imaging done to investigate another condition – it usually means emergency surgery.

But what if these aneurysms could be prevented using a branch of regenerative medicine that focuses on stopping disease processes before they do their damage?

That is a question University of Toronto researchers Clinton Robbins, Myron Cybulsky and Jason Fish are investigating. Robbins is an associate professor in the department of laboratory medicine and pathobiology (LMP) and the department of immunology in the Temerty Faculty of Medicine. He is also the Peter Munk Chair in Aortic Disease Research at the University Health Network (UHN). Cybulsky and Fish are senior scientists at the Toronto General Hospital Research Institute at UHN and faculty members in LMP. Cybulsky is Canada Research Chair in Arterial Wall Biology and Fish is Canada Research Chair in Cell and Molecular Biology.

The multi-disciplinary team is one of 11 sharing nearly $21 million in funding from Medicine by Design over three years. Funded by a $114-million grant from the Canada First Research Excellence Fund, Medicine by Design is a strategic research initiative that is working at the convergence of engineering, medicine and science to support transformative discoveries in regenerative medicine and accelerate them toward clinical impact.

An aneurysm is a swelling in an artery. An abdominal aortic aneurysm, or AAA, occurs in the aorta, the largest blood vessel in the human body. It runs from the heart down through the chest and abdomen, supplying blood to the body. When there is a weakening of the walls of the aorta in the abdomen, the aorta will balloon out. That’s the aneurysm. It’s not a problem until it bursts. If that happens, it can cause life-threatening internal bleeding or blood clots that can block the flow of blood.

“The reality is that we don’t know why these aneurysms develop,” Robbins says. “We have no understanding as to why the tissue in the aorta weakens and we know less about how we might go about repairing that.”

But Robbins and his lab have made an important step forward in learning that cells called monocytes and macrophages play an important role in the progression of AAA.

Monocytes are born in the bone marrow, a spongy tissue inside some of your bones. They are white blood cells and travel throughout the body, fighting infection. They eventually turn into macrophages, which perform the same function as monocytes.

While monocytes play that positive role in the immune response, they also have a negative side – they can gather at certain sites and cause an AAA, which is a type of inflammation.

No one is quite sure why this happens, but it is known that certain risk factors promote AAAs. Men over 65 are more likely to have an AAA, for example. And cigarette smoking seems to be a common cause. In fact, Robbins has found through experiments that exposing mice to cigarette smoke drives the formation of AAA.

Robbins has also begun to wonder if the endothelium – the cells that line the blood vessels – “speak” to the monocytes and macrophages. He has observed that when the AAA develops, there is a buildup of macrophages at that inflammation site. Could this cross-talk between these cell types influence the development of the AAA?

And Robbins has another idea – shift the focus away from why monocytes gather to create an AAA and instead focus on preventing their excessive generation or stopping their entry into the bloodstream from their birthplace in bone marrow.

Enter Omar Khan, whose expertise in nanotechnology is becoming an important part of the solution Robbins and his collaborators are exploring.

“My collaborators and I have been able to model this disease in mice,” Robbins says. “But to accomplish this notion of blocking monocyte production and release, we need someone with experience in nanotechnology. That’s why I was glad when Omar joined Medicine by Design and approached me.”

Khan is an assistant professor in the department of immunology in the Temerty Faculty of Medicine and U of T’s Institute of Biomedical Engineering in the Faculty of Applied Science & Engineering. He obtained his doctorate in chemical engineering and applied chemistry at U of T in 2010 (under the supervision of Medicine by Design executive director University Professor Michael Sefton) and then moved to the Massachusetts Institute of Technology (MIT) for post-doctoral work. His research was spun out into two start-up companies, one of which he founded.

Khan returned to U of T in early 2020, becoming one of 14 new faculty members Medicine by Design has helped recruit. He’s working with nanomaterials – small chemical materials that co-ordinate the delivery of nucleic acids, which are information-carrying molecules in cells that silence, regulate, express or help edit genes. Khan’s lab is applying nanotechnologies to the treatment of chronic inflammation, autoimmune diseases, cancer immunotherapy and the clearance of viruses in incurable infections. In one of his research areas, he controls chronic inflammation by simultaneously preventing excessive monocyte generation in the bone marrow and their exit into the blood. That focus on inflammation is the connection to Robbins’ work.

Since the scientists know that the monocytes exit from the blood vessels in the bone marrow and enter into general blood circulation, eventually reaching the sites of inflammation – the AAA – Khan proposes “closing the door” to stop the out-of-control influx of these monocytes.

“Our plan is to target the bone marrow blood vessels and close the path through which these monocytes would exit the bone marrow. By closing this door, we hope to reduce inflammation and the symptoms, and other pathologies that are caused by chronic inflammation like AAA.”

But it’s not about stopping the flow of monocytes permanently. After all, the monocytes do perform that essential role of fighting infection in the body. So Khan’s technology is programmed to be a temporary therapy.

“I call it ‘on-demand.’ Our angle is to use this smart nanotechnology to send in multiple instruction sets to the bone marrow blood vessels and close the doors so the monocytes won’t come out. Once we have controlled the monocytes creating the inflammation, the nanotechnology stops the therapy to allow the monocytes to exit through the normal process and do their work in maintaining health by fighting infection.”

Khan’s smart technology also performs another important function. While he believes it will stop the release of monocytes to create inflammation, his nanotechnology is also designed to target a gene called “colony stimulating factor 1” (CSF1).

CSF1 is essential in generating monocytes. While the smart nanotechnology will be able to stop the release of monocytes to the bloodstream, the monocytes will continue to build up in the bone marrow, thus creating an eventual surge of them once the therapy is stopped. “So we will be working on slowing down the function of CSF1 to create monocytes in the bone marrow. That’s why we call our nanotechnology a multigene control. It can co-ordinate many different actions.”

For Robbins, the partnership with Khan is the reason he values Medicine by Design’s focus on collaboration.

“My role as a basic researcher is to investigate what is happening in this area of cardiovascular disease. So, we conducted various experiments and have modelled the condition in mice. But with Omar, we can take the next steps and figure out not just what is happening, but why, and, even more importantly, what we can do about it. Through Medicine by Design, my days of just wanting to do the science are over. I have a real interest in what this all means and the more applied clinical side.”

And for Khan, the collaboration is equally beneficial.

“My specialty is nanotechnology. Clint, Myron and Jason are the ones who know about monocytes and biology. So coming back to Toronto and connecting with them because of Medicine by Design is enabling me to hit the ground running and keep moving. With their animal models, we can begin to prove that our technology can work to improve people’s health.”