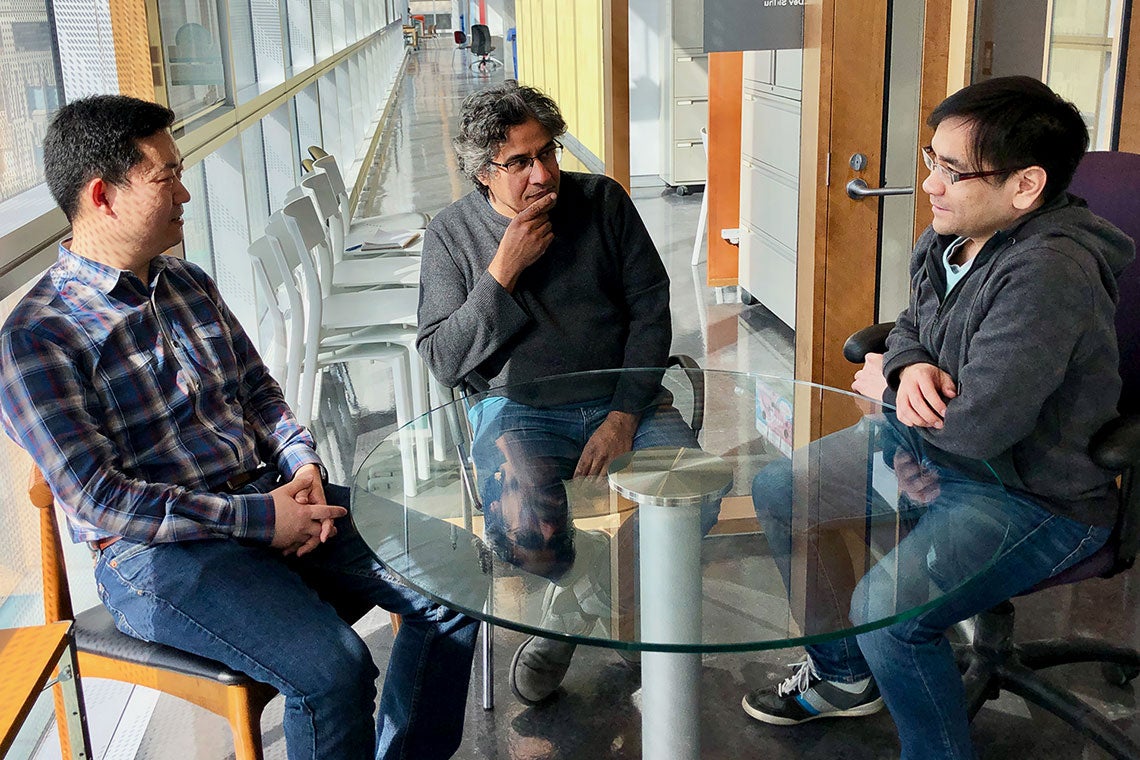 Researchers from the University of Toronto’s Donnelly Centre for Cellular and Biomolecular Research are working on developing antivirals that can combat the novel coronavirus outbreak.

Led by Sachdev Sidhu, a professor of molecular genetics, the team will apply their protein engineering technology to identify promising therapeutics.

“We have diverse expertise on our team from across U of T and the University of Manitoba, which is renowned for its virology research, and we have already demonstrated that we can engineer proteins that inhibit MERS, a related coronavirus,” says Sidhu, who, in addition to the Donnelly Centre holds cross appointments in the Faculty of Medicine and at the Institute of Biomaterials and Biomedical Engineering. “We will now expand on this work to design therapeutics for COVID-19.”

The team recently received almost $900,000 over two years from the federal government through a rapid funding competition announced on Feb. 10 to address the COVID-19 outbreak.

Sidhu is collaborating with Roman Melnyk, a senior scientist at the Hospital for Sick Children and assistant professor of biochemistry at U of T, and Brian Mark, a structural virologist and professor at the University of Manitoba. In a 2016 proof-of-principle study with Marjolein Kikkert, a virologist at Leiden University in the Netherlands, they applied a protein engineering pipeline developed by Sidhu’s team to create proteins that inhibit a related coronavirus that caused the Middle East Respiratory Syndrome (MERS) outbreak in 2012.

Wei Zhang, then a post-doctoral researcher in Sidhu’s lab and now an assistant professor at the University of Guelph, received a national innovation award for this research.

The researchers now plan to use the same strategy to battle the coronavirus behind the COVID-19 global health crisis, which the World Health Organization today declared a pandemic.

Since the outbreak began in China in late 2019, the virus has spread to every continent except Antarctica, with more than 120,000 confirmed cases and more than 4,000 deaths, according to the latest figures. And while researchers around the world are racing to develop a vaccine, that is only a part of the solution, Sidhu says.

“Even if a vaccine becomes available, not everyone is going to get vaccinated,” says Sidhu. “We see that with the flu – the vaccination rates are far from 100 per cent.” Should the virus become endemic and end up circulating in the population like the flu, medicines that stop the virus from replicating in an already infected person will be as important as vaccines, which prevent infection, according to Sidhu.

Jacky Chung, a research associate in the Sidhu lab, will spearhead the project by first engineering proteins that can inhibit the virus. The team will then search for small molecules that behave in the same way since they are easier to develop into therapeutics than proteins.

“It's important to get the therapeutic inside the cells, which is where the virus replicates,” says Chung. “And small molecules can get into cells much more readily than proteins, which are much larger.”

At the heart of the approach lies a protein called ubiquitin, named for being present in all plant and animal cells. Ubiquitin is an essential part of the cellular machinery that the virus hijacks for its own benefit. Upon infection, the virus releases proteins that interfere with human ubiquitin and allow it to bypass the host’s defence system and spread in the body.

To block the virus, the researchers will create synthetic ubiquitin variants (UbV) that thwart rather than aid its ability to replicate. By analyzing the molecular structures of different UbVs bound to the viral protein, they will gain clues into the kinds of small molecules that are most likely to be effective against the virus.

Sidhu says that, within two years, they should have candidate molecules that could be developed into therapeutics. “We know there are literally armies of medicinal chemists and various companies that could then optimize the molecule into a drug that can be given to humans,” says Sidhu who was previously at pharmaceutical giant Genentech and has founded six startups since joining the university.