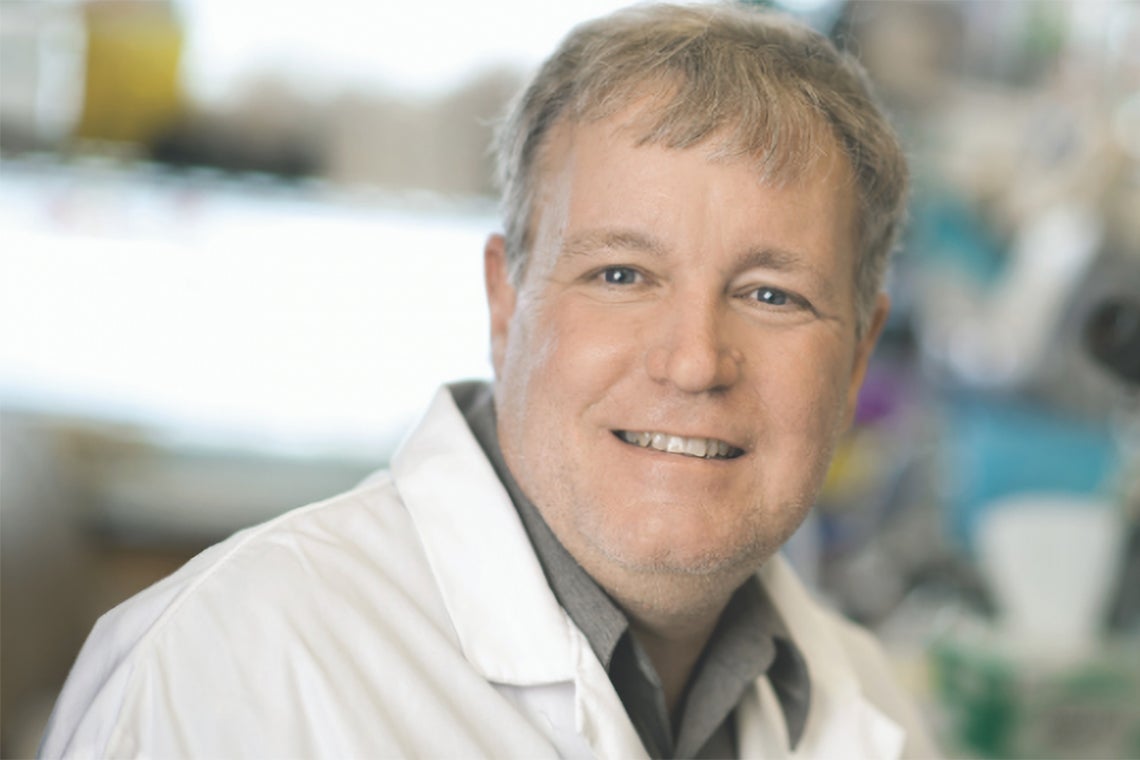 It’s a word that has a science-fiction sound to it, but, in fact, organoids are at the core of what scientist Jeff Wrana calls “revolutionizing biology.”

That’s because organoids offer the promise of new treatments for a host of diseases and conditions, from inflammatory bowel disease to autism spectrum disorder.

“An organoid is a little organ that we can create using human and mouse embryonic stem cells,” says Wrana, a professor in the department of molecular genetics in the University of Toronto’s Temerty Faculty of Medicine and a senior investigator at Mount Sinai Hospital’s Lunenfeld-Tanenbaum Research Institute. “They provide an opportunity to make tiny models of the intestines, liver and kidneys. Our team’s focus now is making cerebral organoids, which are models of parts of the brain.”

The organoids are not “mini-brains,” however, because they are only tiny pieces of tissue that don’t have anywhere near the complexity of even a mouse brain. These are not brains that can think or have consciousness. But these models are offering powerful ways to study disease.

Doing this sophisticated work requires a top-flight team with a wide range of expertise: Like Wrana, Laurence Pelletier is also a senior investigator at the Lunenfeld-Tanenbaum Research Institute and a U of T professor of molecular genetics; Liliana Attisano is a professor in U of T’s department of biochemistry and Canada Research Chair in Signalling Networks in Cancer; Ben Blencowe is a U of T molecular genetics professor and the Banbury Chair in Medical Research; and Sidhartha Goyal is a professor in U of T’s department of physics in the Faculty of Arts & Science. Attisano and Blencowe are also scientists at U of T’s Donnelly Centre for Cellular and Biomolecular Research.

The team is one of 11 sharing nearly $21 million in funding from Medicine by Design over three years. Funded by a $114-million grant from the Canada First Research Excellence Fund, Medicine by Design is a strategic research initiative that is working at the convergence of engineering, medicine and science to catalyze transformative discoveries in regenerative medicine and accelerate them toward clinical impact.

Wrana and his colleagues have already done important work using organoids to study how cancer starts and how the intestines can regenerate after injury.

Now focusing on the brain, the team will use organoids to examine how the tissue in the brain develops. A key part of this process is a complex phenomenon called splicing that starts with the genes. It’s an essential part of development. It is responsible for ensuring that segments of genes, referred to as exons, are precisely joined to make RNA transcripts that can direct the production of proteins, the key building blocks of all cells. Importantly, the process of alternative splicing, whereby exons are joined in different combinations to generate multiple protein products from a single gene, is critical for the development of complex organs such as the brain.

Blencowe and his collaborators showed previously that there is a link between autism and abnormal alternative splicing of very short exons, called microexons, which are found primarily in the brain. These microexons are either spliced in or left out of the final gene transcript before it directs protein synthesis. Microexons can have a dramatic effect on a protein’s ability to bind its partners, which is required during brain development. This was an important finding, but researchers didn’t understand the role of individual microexons until recently.

In January 2020, Blencowe and his team published a paper in the journal Molecular Cell that characterized the function of a single microexon that is frequently skipped in transcripts in the brains of people with autism.

The researchers showed that mice engineered to lack the microexon displayed behaviours related to those seen in autism, such as avoidance of social interactions. The mice also performed poorly in a learning and memory test.

Now Blencowe, working with Wrana’s Medicine by Design-funded research team, will be able to investigate this process further using the human brain model provided through the organoids the team is creating.

“We will be able to model how neural tissues develop with the organoid,” says Wrana. “And, remember, since we are using human stem cells, we will be creating human models of disease and conditions like autism. Using mice is certainly helpful, but a mouse model can’t recapitulate all the aspects of a human disease. We think that using human models will bring us unique insight because there are human-specific aspects to many of these signaling networks.”

Blencowe says this investigation could ultimately lead to important new therapeutic approaches for people with autism. One possibility is increasing the activity of a regulator of microexon splicing using small molecules. An organoid model under development by Wrana’s group will provide a valuable initial test of the efficacy of this approach.

But to do a more complete range of brain research, Wrana’s team ran up against a big problem: they couldn’t get the organoids to grow blood vessels.

“If we’re going to do our work to the full extent, we need these models to include other types of cells typically found in the brain. And blood vessels are essential.”

Fortunately, they discovered a way to get something very much like blood vessels into the models by using microfluidic devices.

“It’s like a little pump where we can implant organoids in these devices. The device pumps nutrient solutions around the organoid. The solution isn’t true blood, but it mimics blood. And that will stimulate the formulation of blood vessels in the device. Those blood vessels will actually support organoid growth.”

Wrana says the development of this device is a major step forward because it will enable the team to examine conditions like stroke. The project will also develop tools to help the development of safer and more efficient drugs and improved strategies to treat stroke.

“You can take the microfluidic device and put in little beads. The beads will get taken up into the blood vessels. As they move towards the organoid brain model, the blood vessels get smaller and smaller. And at some point, these beads will actually clog the blood vessel. So we think this can be a model for stroke. We can induce a stroke-like event and look for the earliest changes that occur in a human system when a stroke happens and that will help in the development of drugs to prevent and treat stroke.”

The vascularized brain model will also enable the researchers to examine the inner workings of the blood-brain barrier that protects the brain from pathogens and toxins.

“This is a big question in drug development,” says Wrana. “You want some drugs to penetrate this barrier to treat diseases that affect the brain, such as multiple sclerosis. But there are other drugs that you don’t want to get into the neural tissue because they could damage the brain. So, this organoid model could potentially allow us to measure if drugs can penetrate the human blood-brain barrier, because the human blood-brain barrier isn’t exactly the same as those in animals like mice.”

Wrana says this kind of adventurous research wouldn’t be possible without the support of Medicine by Design.

“Our work would never be funded through traditional grant funding mechanisms, which tend to be more conservative. Medicine by Design allows you to think about possibilities and then actually try to do the pie-in-the-sky experiment. For example, developing our microfluidic device is not something you could propose to do in a standard grant platform, which would have required preliminary data. We probably wouldn’t get the funding until we had actually produced the device. But Medicine by Design has supported us in these more speculative ideas. That’s really been transformative for our research program. “

With files from Jovana Drinjakovic