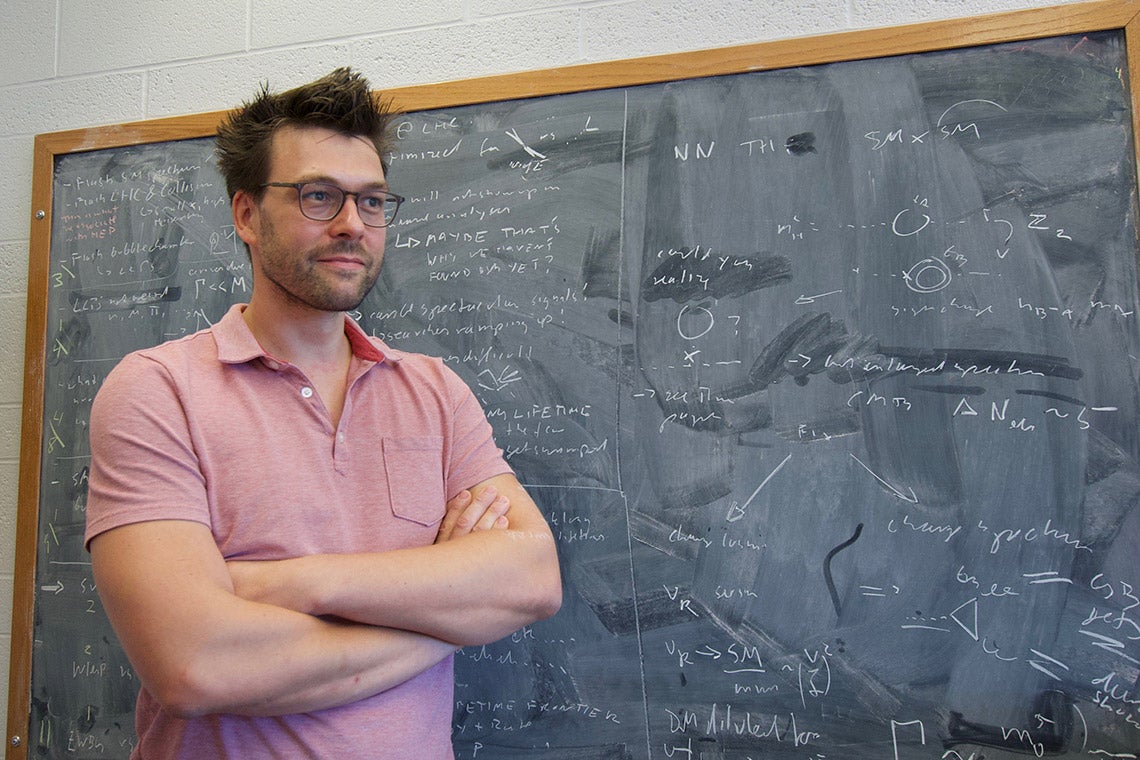 A University of Toronto theoretical physicist on the hunt for hidden particles that could solve cosmic mysteries hopes Canada will go all in on a particle-detection project – one that could put Toronto at the nexus of world-leading research.

David Curtin is one of the leaders of the proposed Massive Timing Hodoscope for Ultra Stable Neutral Particles, nicknamed MATHUSLA after the longest-living man in the Book of Genesis. The detector, about the size of a big box store, would be built in a field above the Large Hadron Collider (LHC), a 27-kilometre circular tunnel beneath the French-Swiss border near Geneva where subatomic particles are smashed together at near light speed to study what’s created and how it behaves.

The hope is MATHUSLA, a comparatively modest undertaking, could spot so-called “long-lived” particles the collider has failed to detect.

“I want to get the public and politicians interested in this project because it represents a unique opportunity for Canada and Toronto,” says Curtin, an assistant professor in the department of physics in Faculty of Arts & Science who recently arrived from the University of Maryland.

“Obviously, we are looking for funding all over the place, but there is this fantasy scenario where Canada says it is going to make this a Canadian project, and then they own it.”

With an estimated price tag in the tens of millions, the MATHUSLA project already enjoys support by large portions of the scientific community working on high-energy particle theory physics, according to Curtin.

The source of numerous science fiction tropes about parallel universes and alternate realities, the story of quantum physics also includes some of the greatest minds in history, from Albert Einstein to Stephen Hawking. In recent years, attention has focused on high-energy particle physics at the Large Hadron Collider. But researchers have not yet observed the expected evidence that would confirm basic theories about things like the origin of ordinary matter, dark matter and the recently discovered Higgs boson – which the media have dubbed “the God particle.”

Curtin and others behind the MATHUSLA project think researchers may be looking in the wrong place.

They believe the particles they are seeking could allow science to move beyond the boundaries of the standard model of quantum theory into an era of new physics.

“If MATHUSLA could detect and observe these long-lived particles as they decay, it may help solve fundamental mysteries like why gravity is so weak compared to other forces, or the nature of dark matter,” says Curtin.

“We could witness the act of cosmic creation in our labs, an exact replaying of what happened during the Big Bang to create all the matter we are made from.”

Curtin is already recruiting U of T engineering professors and students to work on MATHUSLA’s modular design, which would fit together in rows like huge Lego blocks, with sensors perched on top of a largely hollow building.

He’s also forging ties with the department of physics’ high-energy particle physics experimental group, as well as the Perimeter Institute for Theoretical Physics in Waterloo, Ont.

Radiation medicine and the HTTP software that allowed the internet to flourish were among the beneficial spinoffs of earlier high-energy particle physics research, Curtin says. He adds that linking U of T and nearby research centres around a project like MATHUSLA – which can also double as a cosmic ray telescope – could create the kind of scale and synergy that has propelled places like San Francisco to the forefront of high-tech research.

“U of T –  and Toronto –  has all these resources we can leverage, but all these research clusters need to be interconnected.”