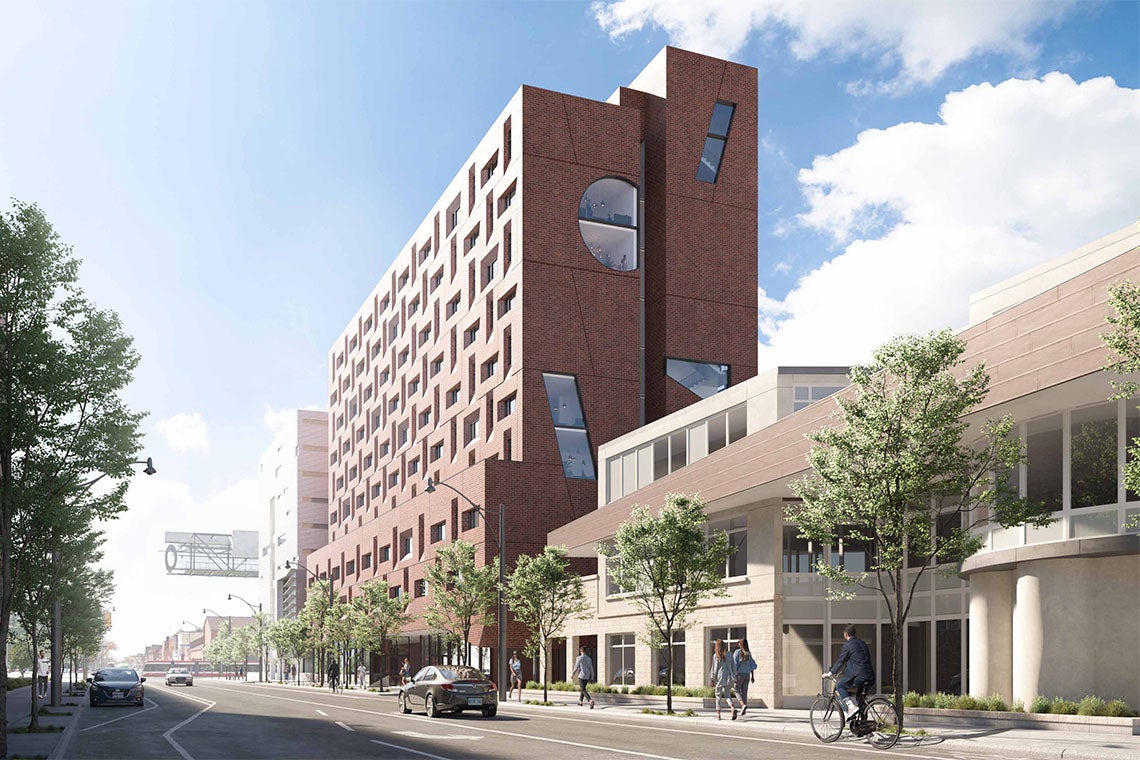 The proposed residence on Harbord Street, next to Graduate House, would house over 200 graduate students and is designed to fit in with the surrounding neighbourhood (rendering by Michael Maltzan Architecture)

The University of Toronto has unveiled plans for a 10-storey building on Harbord Street that would provide housing for over 200 graduate students and expand living, social and study spaces on the St. George campus.

With a brick exterior and unique window cutouts, the proposed Harbord Residence envisions a mix of dormitory-style and single-occupancy rooms that would help meet the rapidly growing demand for graduate student housing options.

The proposed residence – which has yet to be considered by Governing Council – would also feature a bridge connecting it to neighbouring Graduate House, with the two buildings sharing amenities including an event space, food court, lounges and study rooms. It’s being designed by Los Angeles-based Michael Maltzan Architecture and would be executed with Toronto’s architectsAlliance.

Anne Macdonald, U of T’s assistant vice-president of ancillary services, said the proposed building would be a welcome addition to campus since current demand for graduate student housing is more than double the number of available spaces.

“We have a ton of demand for graduate student housing,” Macdonald said. “We currently have thousands more applicants every year than we have spaces.

“This is a step in the right direction and will give us more spaces for graduate students who want to live on campus and be a part of campus life.” The proposed Harbord Residence would be connected to neighbouring Graduate House by a bridge, with the two buildings sharing amenities (rendering by Michael Maltzan Architecture)

The upper levels of the proposed building would consist of residential space and smaller lounge spaces for the exclusive use of residents of both Harbord Residence and Graduate House. The second and third floors would host common lounges, meeting spaces, residence life offices and quiet study rooms. And the ground floor would accommodate a food court and retail space, acting as the interface between the building and the surrounding Huron-Sussex neighbourhood.

“One of the things we wanted the architect to do for us was to have the ground plane be a more welcoming place for the broader community – for our neighbours and other U of T community members to come in,” said Macdonald. “As you go up the building, there are different levels of community-building, with shared spaces and private spaces upstairs.”

Read more about U of T’s Four Corners development strategy

The design of study spaces in the building would take into account students’ evolving study habits, with an increased emphasis on rooms that facilitate group work.

“We’ve found over the years that more and more students are doing work in groups, especially graduate and second-entry students, so there’s a need for that. These spaces will be available and shared between Harbord Residence and Graduate House,” Macdonald said.

The construction of a new residence building near the corner of Harbord Street and Spadina Avenue was one of the ideas generated by the Huron Sussex Neighbourhood Planning Study completed by U of T in 2014 in partnership with the Huron-Sussex Residents Association and the City of Toronto.

The objective of the study was to “identify opportunities for addressing residential needs of the university and the community,” with the Harbord Street site identified as an ideal location to provide much-needed residential space while respecting the residential character of the surrounding neighbourhood.

“The idea for Harbord Residence was hatched some time ago and it was identified as a possible development during the Huron-Sussex neighbourhood planning process,” Macdonald said.  “All the participants in the process appreciated the need for additional student housing in the precinct, as well as the importance of new buildings integrating well with the adjacent neighbourhood.

“We asked the architects to read the Huron Sussex Neighbourhood Planning Study and make sure it was in their thoughts as they were designing the building.”

The proposal, anticipated to enter the university’s governance process in 2020, follows last year’s announcement of an agreement to build a 23-storey residence tower at the corner of Spadina and Sussex Avenues. That building, which will house over 500 students, is expected to be completed in 2021.