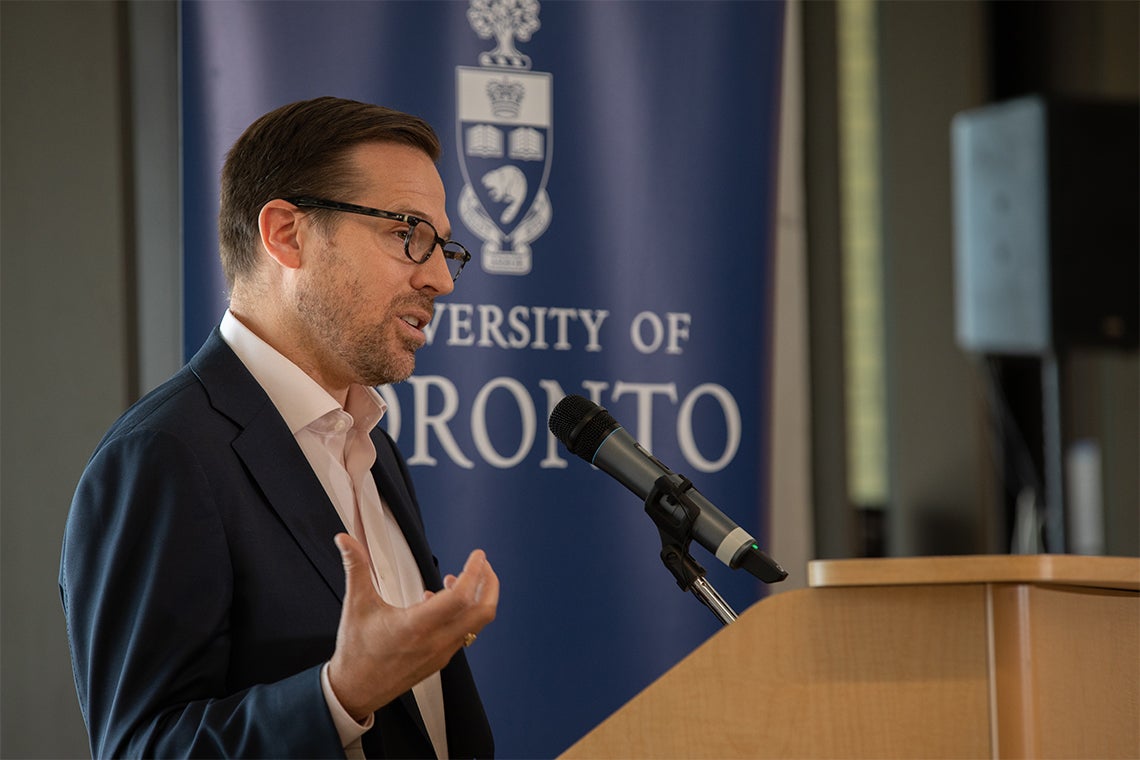 Ehren Cory, the chief executive officer of the Canada Infrastructure Bank, speaks at an event to announce a $56-million financing partnership with U of T to complete deep energy retrofit projects on campus (photo by Johnny Guatto)

The University of Toronto will receive $56 million in financing from the Canada Infrastructure Bank (CIB) to accelerate the university’s plans to achieve a climate positive campus.

Through the launch of Project LEAP, U of T will use the CIB financing to complete deep energy retrofit projects – such as converting gas boilers to electric boilers and installing energy storage solutions – to reduce greenhouse gas emissions by more than 50 per cent, or 45,000 tonnes of CO2 equivalents, by the end of the decade.

It’s all part of U of T’s ambitious Climate Positive plan to achieve emissions reduction targets on the St. George campus that exceed the emissions physically produced by 2050. The infrastructure-focused strategy complements efforts to advance sustainability across U of T’s research, innovation and teaching missions – including the development of cleantech innovations that will aid Canada’s efforts to fight climate change and transition to a green economy.

“The University of Toronto is a global leader in addressing the urgent challenge of climate change,” U of T President Meric Gertler said. “Our Climate Positive plan is transforming energy sources and reducing energy consumption on our historic St. George campus. This will help us ensure we can deliver on our mission of excellence in research and learning more sustainably for generations to come.

“We are grateful to the CIB for recognizing and supporting our commitment to Canada’s net-zero targets and to harnessing the innovation of cleantech startups on our campuses and beyond.” 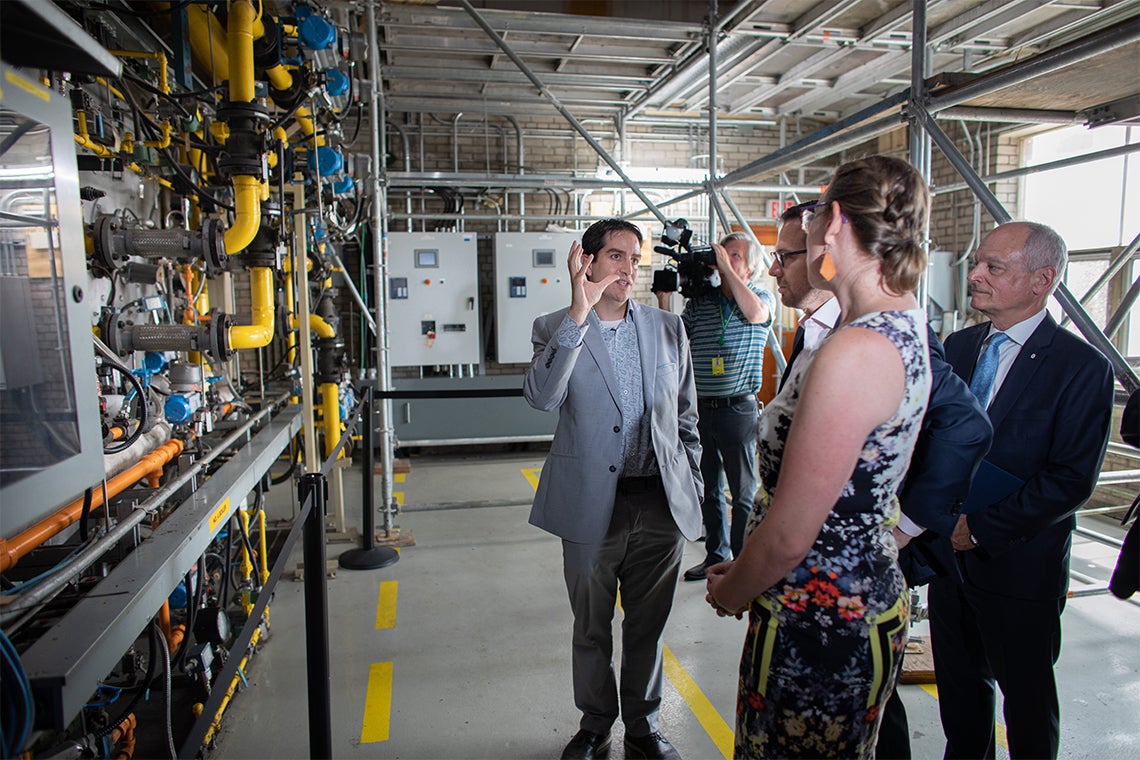 To date, CIB has funded more than 35 projects across Canada to develop the next generation of clean and connected infrastructure, including $2 billion for energy efficient building retrofits.

CIB’s agreement with U of T represents the infrastructure bank’s first partnership with an academic institution. It’s part of CIB’s Public Retrofits Initiative, which provides financial support for building retrofits to achieve significant energy savings from infrastructure owned or managed by the public sector.

The financing partnership is expected to save U of T more than $13 million over 25 years via lower interest rates on the CIB-financed projects.

Ehren Cory, CIB’s chief executive officer, hailed U of T and its commitment to addressing climate change at an event held at the university Tuesday to mark the collaboration.

“This announcement is a major milestone, but it’s just a step in your journey and we’re excited to be with you the whole way.”

U of T’s planned retrofits include replacing gas boilers with electric boilers in its central steam plant and installing a supplemental steam turbine. U of T also plans to use the CIB financing to undertake deep energy retrofits of two labs and the Earth Sciences Centre, and to establish a local low carbon energy source that supplies renewable energy through technology such as solar.

“Underneath our campus, we have one of Canada’s largest and oldest district energy systems,” said Ron Saporta, U of T’s chief operating officer, property services and sustainability. “It’s over 120 years old and it’s the primary contributor to a lot of our carbon emissions because it heats and powers up buildings.

“This project allows us to modernize that system and to start to migrate away from fossil fuels as the primary heating source. We can upgrade energy-intensive buildings to reduce the amount of carbon they emit.” 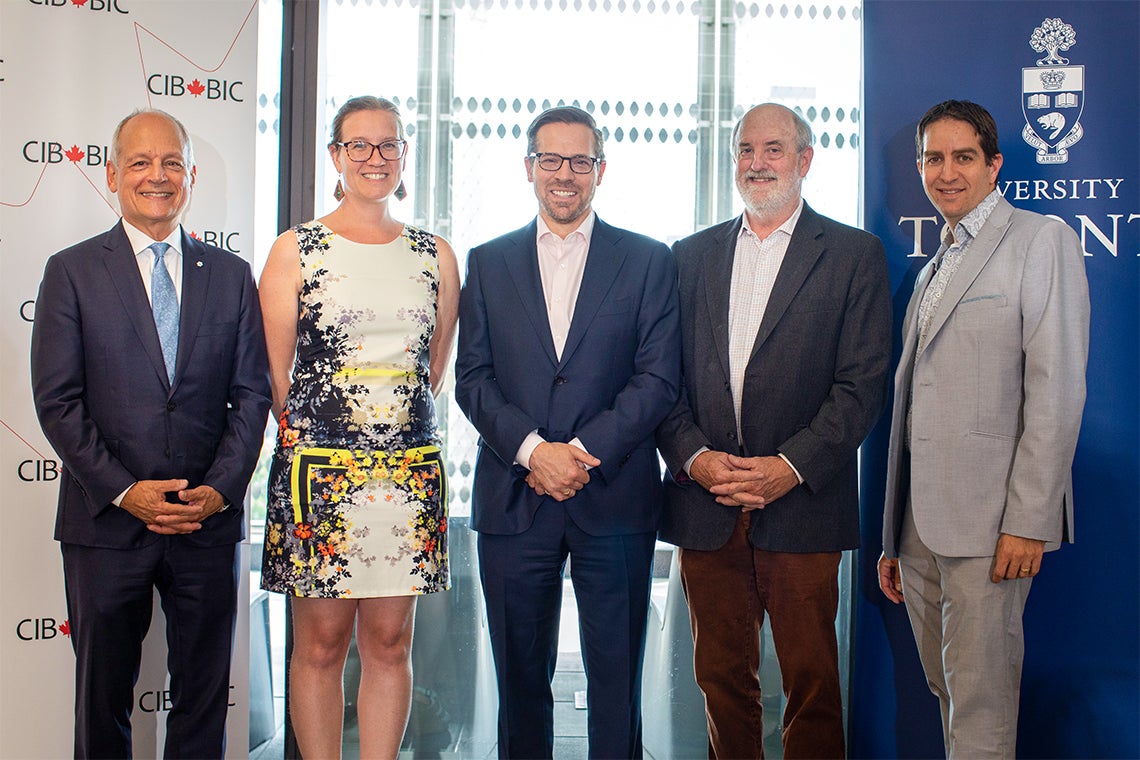 There are also plans to pilot green technology solutions such as carbon capture, utilization and a waste-to-fuel “digester” that would take the more than 500 kilograms of organic waste and convert it into fuel to heat buildings.

“The impact will be massive – it will not only improve what happens inside those buildings, but our academic mission, too,” said Saporta. “We have classes and courses across campus that are studying these types of retrofits, but this is an opportunity to see it in real life.”

Karina Gould, the federal minister of families, children and social development, said CIB’s partnership with U of T sets an example for students.

“Whether they go on to build infrastructure, communities or businesses, the first thing they must consider is how they can leave our planet better than they found it,” she said. “So together we can support our communities to take climate action, strengthen our community and build a strong future for everyone.”

U of T’s effort to become a climate positive institution has been years in the making.

In 2019, the university unveiled its Low Carbon Action Plan, which set a goal of cutting greenhouse gas emissions by 37 per cent from 1990 levels by the year 2030 and putting it on a path to becoming a climate positive institution.

One particularly high-profile project is the urban geoexchange system being built on the St. George campus. It involves drilling boreholes deep into the ground to store surplus heat generated by nearby mechanical systems in the summer for use in the winter. It’s estimated that the system – installed alongside U of T’s Landmark Project to make the St. George campus greener, more walkable and more accessible – will reduce the university’s greenhouse gas emissions by 15,000 metric tons per year. Buildings around King’s College Circle will need to be retrofitted to take full advantage of the new system. 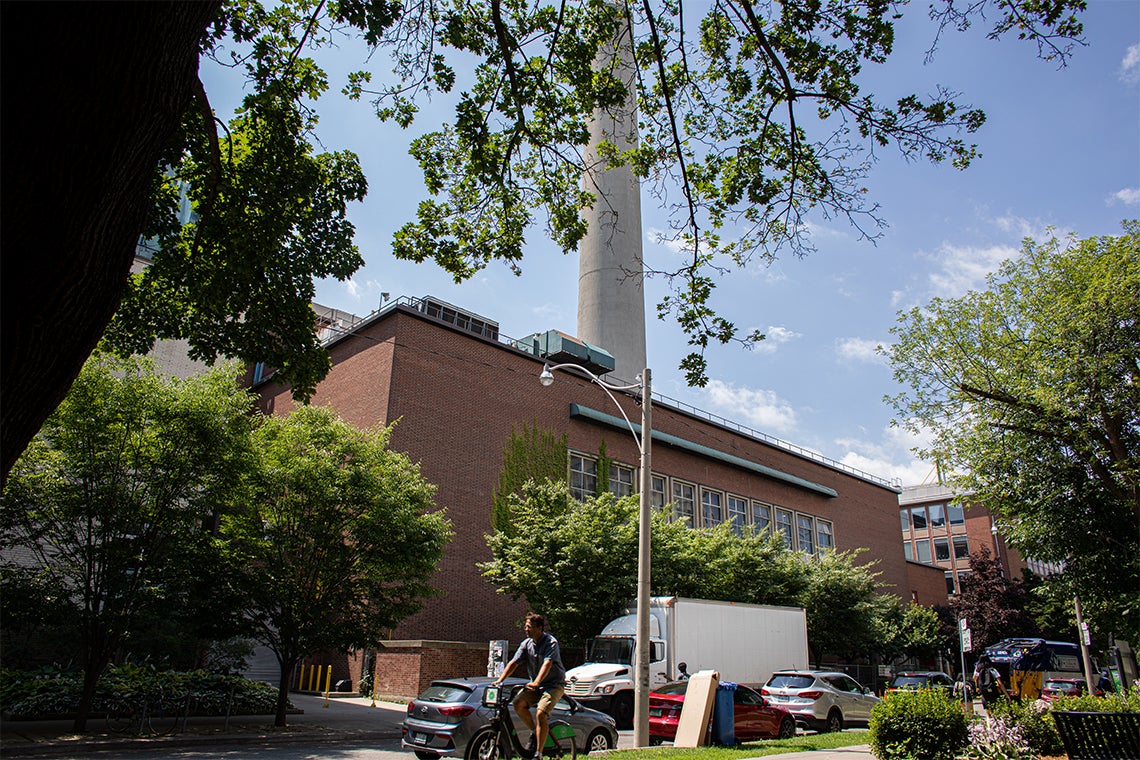 The central steam plant on the St. George campus is the hub of one of Canada’s largest and oldest district energy systems (photo by Johnny Guatto)

U of T’s efforts to reduce emissions today are part of a responsible growth plan that will see it double its infrastructure footprint on the St. George campus even as emissions continue to decline well below current and historical levels.

“U of T is an engine of economic growth and prosperity for its region and for Canada,” said Scott Mabury, U of T’s vice-president, operations and real estate partnerships. “The demand for university space that supports teaching, advanced research, collaboration with industry, and startups to scale continues to grow.

“The CIB’s commitment to the university’s deep energy retrofit projects will assist U of T to meet this demand while reducing our carbon footprint and helping build a green economy.”

CIB’s $56-million financing partnership with U of T, an innovation leader, also promises to help Canada reach its goal of net-zero greenhouse gas emissions by 2050.

Saporta said the partnership marks an exciting milestone on U of T’s climate positive journey.

“It’s driving all of us to get to that climate positive goal as fast as we can.”