Construction begins on historic U of T campus revitalization project 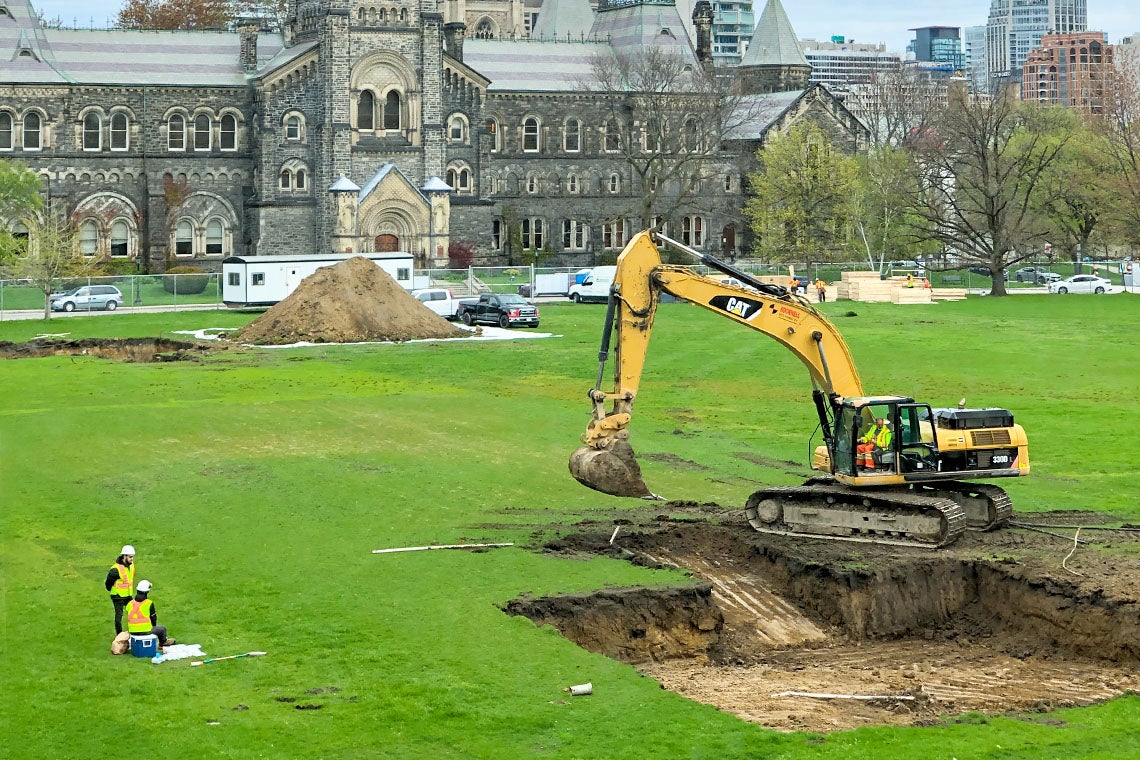 Construction work is well underway on the University of Toronto’s Landmark Project, which will revitalize the historic core of the St. George campus and accelerate the university’s ambitious climate action goals.

In May, crews began preparatory work at Front Campus and King’s College Circle, removing soil for testing, erecting fencing to protect trees and bringing backhoes, trucks and other equipment to the site. The preliminary work – done in strict accordance with the province’s COVID-19 safety measures – will lay the groundwork for a three-year construction project that will make Front Campus more pedestrian-friendly, create new greenspaces and improve accessibility.

The Landmark Project , the most significant open space project in the university’s history, will also enable the installation of a massive underground geoexchange field that will help reduce U of T’s greenhouse gas emissions by an estimated 15,000 metric tons per year – a key component of the university’s Low Carbon Action Plan.

Scott Mabury, U of T’s vice-president, operations and real estate partnerships, says the goal is to complete as much of the soil excavation and drilling work as possible while campus remains sparsely populated due to COVID-19 restrictions.

“For the excavation, we have a backhoe on the site that will reach out, scoop out dirt, put it in the truck and the truck drives away – it’ll be good to have as much of that disruptive and noisy work done while campus is largely absent of students, faculty and staff,” Mabury said.

“There are very few people on campus and there are hundreds of trucks that need to come and go, so we’re going to try and take advantage of this condition to the extent possible.”

In an effort to protect trees and gardens, more than six kilometres of tree protection fencing will eventually be installed across the various sites involved in the Landmark Project. That includes Front Campus and King’s College Circle as well as the Medical Sciences Building, Hart House, the Sir Daniel Wilson Residence and Back Campus.

Measures are also being taken to prevent soil compaction – caused by construction vehicle activity – which can affect trees’ roots and their overall health.

“Tree protection is both a city requirement as well as a university one, in that trees are an important part of our landscape and the improved landscape to come,” Mabury said. “We’re going to be adding new trees, but we’d like to not lose existing trees as well.” 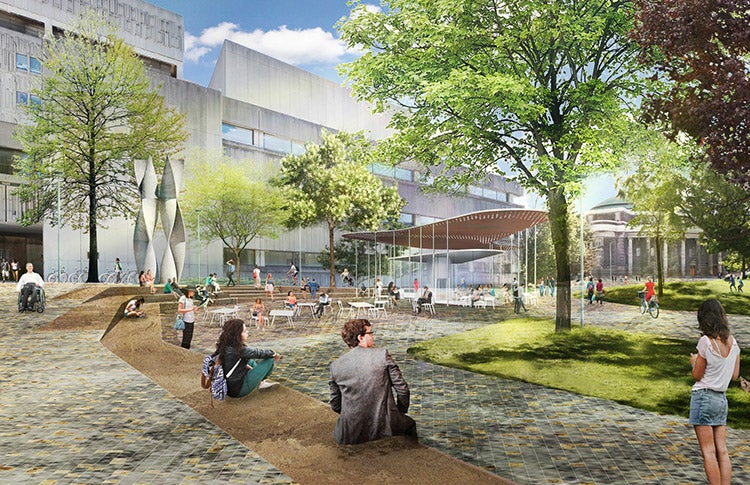 Once the identified trees are suitably protected, drilling rigs will excavate four feet into the existing topsoil, creating a platform from which more than 420 geoexchange boreholes will be dug to a depth of around 240 metres. The boreholes will allow surplus heat generated by mechanical systems in the summer to be stored underground for use in the cold winter months – effectively using the Earth as a thermal battery.

“This is a significant step in reducing our carbon emissions and meeting the goal we have set for ourselves by 2030, as well as more ambitious goals beyond that up to the year 2050 to be as close to carbon neutral as possible,” said Mabury, referring to U of T’s goal to curb greenhouse gas emissions by 37 per cent from 1990 levels by the year 2030.

Mabury said he doesn’t expect guidelines around physical distancing and other matters to cause delays in the current phase of work.

“It’s easier to maintain safety protocols in the current scenario where the activities at play are removing dirt and drilling holes because it’s a fairly small number of people – all largely encased in their vehicles or being inside a piece of equipment,” said Mabury.

“It’s more challenging if you’re inside a building and you’re in the final stages of putting up drywall, running electrical work, installing furniture, etc. That’s not where this project is.

“Given the lack of disruption from having lots of people on campus, we have a window right now where we can actually go faster than expected.” 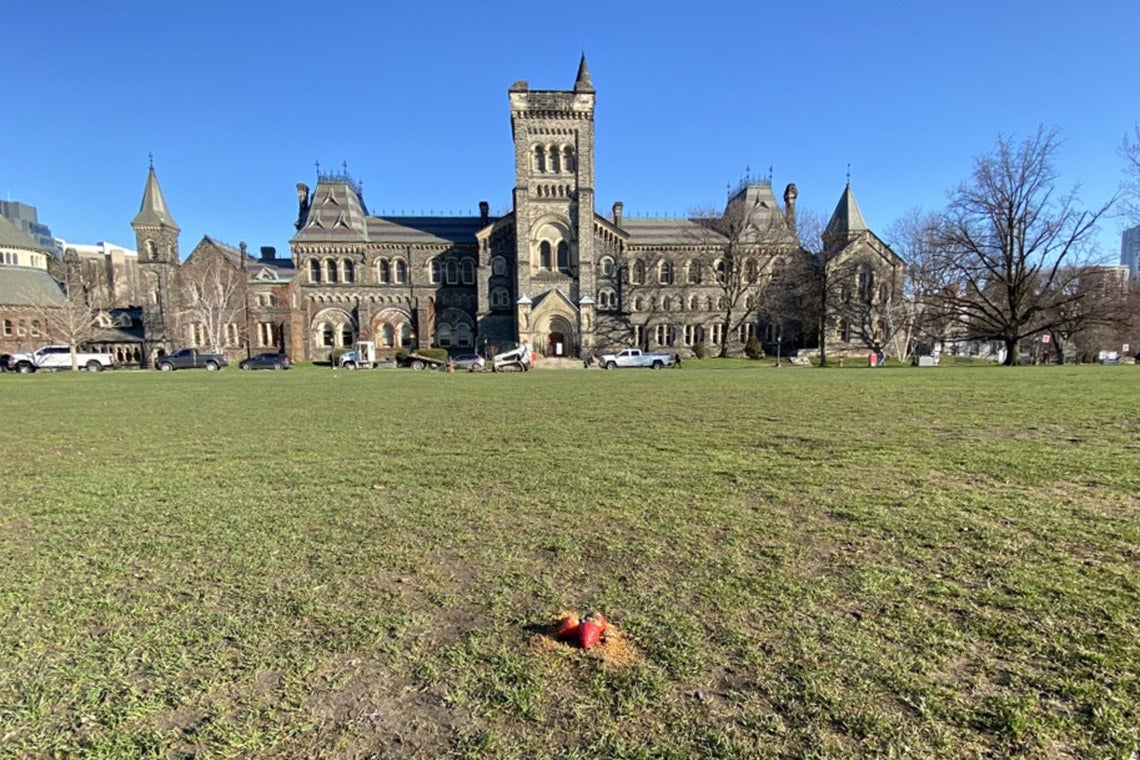 Leaders from U of T’s Indigenous community conducted a ceremony to acknowledge the impending changes to the land, which included an offering of berries and tobacco (photo courtesy of Michael White)

Prior to the work getting underway, leaders from U of T’s Indigenous community conducted a ceremony to acknowledge the impending changes to the land, which represents a direct connection to ancestors. As part of the ceremony, Shannon Simpson, director of Indigenous initiatives, and Michael White, director of First Nations House, Indigenous student service, made an offering of berries and tobacco.

A more expansive ceremony is planned for when ground is broken on the new Indigenous Landscape project planned for Hart House Green as part of the Landmark Project.

The end result of the Landmark Project, according to Mabury, will be a U of T campus that is greener, more walkable, more accessible and more welcoming.

“The relationship between the individual, the buildings and the landscape will be reclaimed.”

He hailed the geoexchange project as something that will not only help U of T achieve its emissions goals but will also allow the university to save money on its utility bill “that can be directed into the classroom and into further carbon reduction strategies.”

The Landmark Project is the result of years of planning and consultations dating back to 2013. It is made possible by the contributions of more than 2,600 donors.

As part of the university’s efforts to keep people informed and minimize disruption caused by the project, U of T community members can subscribe to receive email updates by emailing landmarkupdates@utoronto.ca.