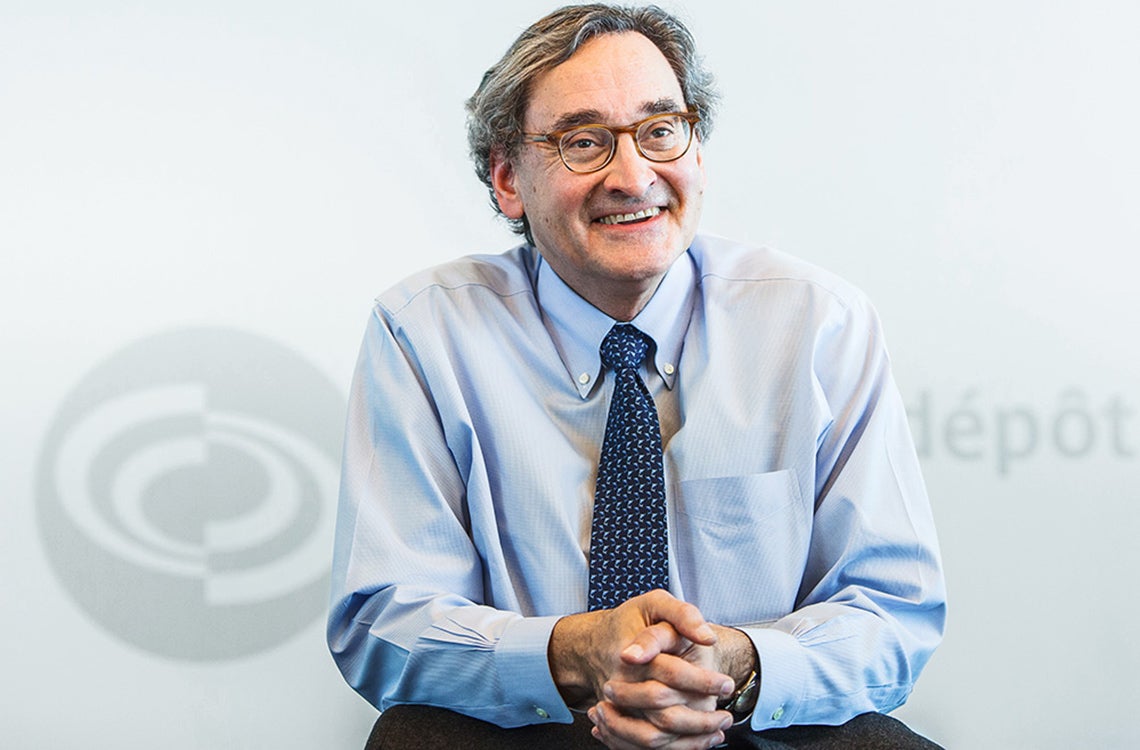 Michael Sabia, one of the country’s most accomplished leaders in business, investment and public policy, has been named the new director of the University of Toronto’s Munk School of Global Affairs & Public Policy.

The university’s Agenda Committee of Academic Board recently approved the appointment of Sabia, who is currently CEO of pension fund Caisse de dépôt et placement du Québec (CDPQ), which has more than $325 billion of assets invested globally, for a five-year term beginning Feb. 1, 2020.

A U of T alumnus, Sabia will draw on his considerable experience in both the public and private sectors – he once ran Canada’s biggest telecom and helped privatize its largest railway – to help realize the Munk School’s growing ambitions in Canada and on the global stage.

“CDPQ is now a global financial institution with investments around the world. Over the last decade, we have had to navigate through an increasingly complex and turbulent geopolitical scene,” Sabia said.

“With the lessons learned and the global relationships built, I am looking forward to working with the scholars, students and staff at the Munk School to continue building an institution engaged in the world and widely admired around the globe for the quality of its ideas and its practical solutions to the issues facing us all.”

The Munk School, created through a merger last year of the Munk School of Global Affairs and the School of Public Policy & Governance, is a leading hub for interdisciplinary research, teaching and public engagement that houses world-class researchers and more than 50 academic centres, labs and programs.

It’s also home to 20 teaching programs, including Munk One – a first-year foundational program that focuses on global problem-solving.

Sabia will take over the role of director of the Munk School from Professor Randall Hansen, who is currently serving as interim director.

“I’m delighted to welcome Michael Sabia back to the university as the Munk School’s new director,” said President Meric Gertler. “Throughout his career, he has made significant contributions to public policy, to business and to the world of investment. I know he will bring the same kind of engaged thought leadership to the school.

“I would also like to thank Professor Hansen for his excellent leadership and guidance at the school. His work has helped set the stage for future success.”

Sabia, who earned a bachelor’s degree in political economy from U of T before completing two graduate degrees at Yale University, took over the role of chief executive at CDPQ in 2009 and proceeded to build the organization into a global financial institution with more than $325 billion in assets under management.

He also oversaw the implementation of a new investment strategy that made CDPQ an internationally recognized leader among investors working to address climate change, develop urban infrastructure and forge global industry partnerships.

Before that, Sabia held several senior positions at Bell Canada parent BCE Inc., including the role of CEO from 2002 to 2008 when he led a strategic transformation of the telecommunications giant. He also served as chief financial officer at Canadian National Railway, where he worked with then-CEO Paul Tellier to successfully launch CN as a publicly traded corporation through what was then the largest-ever initial public offering in Canadian history.

Sabia spent several years in the public service prior to entering the corporate world. He was director general of tax policy in the federal department of finance, where he was one of the architects of a comprehensive reform of Canada’s tax system, and served as deputy secretary in the Privy Council Office.

More recently, Sabia served on Finance Minister Bill Morneau’s advisory council on economic growth. He is currently co-chair of the G7 Investor Leadership Network on Climate Change, Diversity and Infrastructure Development, as well as co-chair of long-term investment, infrastructure and development for the World Economic Forum.

In addition, Sabia is a trustee of the Foreign Policy Association of New York and a member of the Asia-Pacific Foundation of Canada’s Asia Business Leaders Advisory Council. He was named an Officer of the Order of Canada two years ago, and has received an award from the non-profit Public Policy Forum for his many contributions to public policy in Canada.

President Gertler said Faculty of Arts & Science Dean Melanie Woodin, Vice-President and Provost Cheryl Regehr and he have asked Sabia “to lead a consultative process within the university to determine whether establishing the Munk School as a free-standing faculty would be a constructive step forward.”

“I’m immensely proud of everything that has been accomplished at the Munk School so far,” President Gertler said.

“With the invaluable financial and ongoing commitment of the Munk family and other generous donors, and with the dedication of the school’s first-class faculty and staff, I am confident of our continued success.”