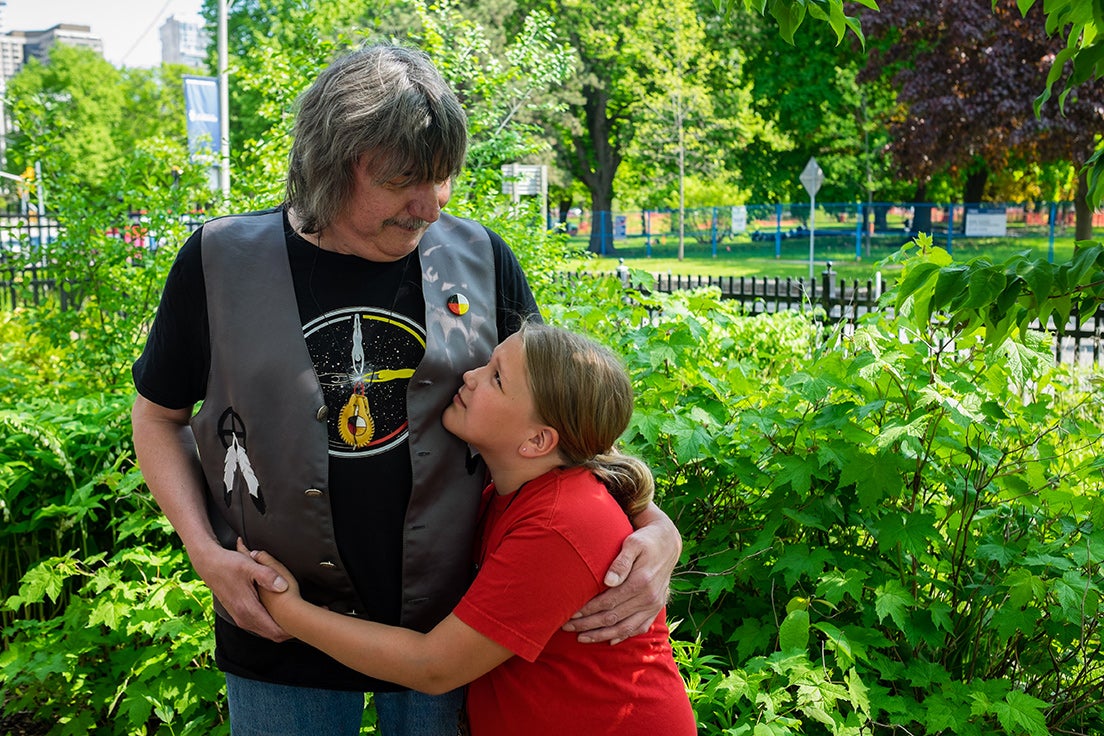 Unlike when he was a kid, Roy Strebel’s 9-year-old daughter Shay-Lee now has the opportunity to learn about Indigenous Peoples in school. But Strebel still wants to make sure she also gets a hands-on education that helps her truly understand her Anishinaabe identity and origins.

For the past five years, they have tended the medicine garden to the east of Hart House, facing Queen’s Park Crescent West. By teaching her to care for the sacred plants, Strebel also teaches Shay-Lee about her own family’s roots.

Working with four sacred medicines – sage, sweetgrass, tobacco and cedar – in the garden can help her “reclaim her spirituality as an Indigenous person,” says Strebel. “It's something that wasn't offered to us when we were young because it wasn’t allowed.”

Strebel has taught his daughter about the sacred plants and their uses since before she could speak, he says. And, thanks in part to their gardening family ritual, she has become a teacher of Indigenous traditions in her own right. At school, Shay-Lee teaches her friends about the plants and the medicine wheel. “Her teachers are actually quite amazed about what she has brought to the classroom,” her father says.

The little green patch behind Hart House produces the four sacred medicines that are used in smudging ceremonies. The cedar can also be used for tea or baths, and the tobacco for thanksgiving offerings or prayer ties.

The Kahontake Kitikan Garden was founded in 2002 by the Native Students' Association. It was named by the late Anishinaabe Elder Lillian McGregor and Oneida Elder Grafton Antone, who combined their communities' terms for “garden.”

Andrew Wesley, Elder-in-Residence at First Nations House, is expected to participate in the annual opening of the garden for the summer on Thursday, May 31 at noon. The public is invited to attend.

“My purpose in opening the garden is to give thanks to our creation, to the creator, and to pray to the four directions of life and that we'll have a good garden to share our medicine with people who need it in their healing journey or their life,” says Wesley. 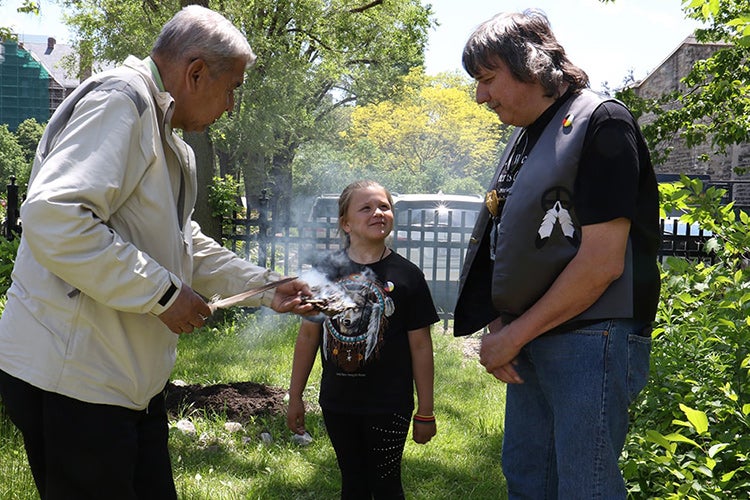 First Nations House Elder-in-Residence Andrew Wesley, Shay-Lee Strebel and Roy Strebel take part in a smudging ceremony at the opening of the garden in 2017 (photo by Hannah James)

Read more about the medicine garden in U of T News

Strebel, who is a member of Thessalon First Nation, east of Sault Ste. Marie, began to tend the garden when he came to the University of Toronto to take Indigenous studies.

He enrolled in university in his late forties after his 20-year career in manufacturing audiovisual equipment ended with a factory closure. “I didn't have the skills or education to get a half-decent job, something that I would enjoy the rest of my life,” he recalls.

While it was sometimes awkward being the oldest student in the classroom, Strebel says he usually felt comfortable. “I felt people had a little more respect for me for doing what I'm doing.”

He got his bachelor's degree in 2016 and is now working towards a master's in adult education and community development at U of T's Ontario Institute for Studies in Education.

“I learned a lot over the years about my culture and ceremonies and identity,” he says. “It's been a journey, that’s for sure.”