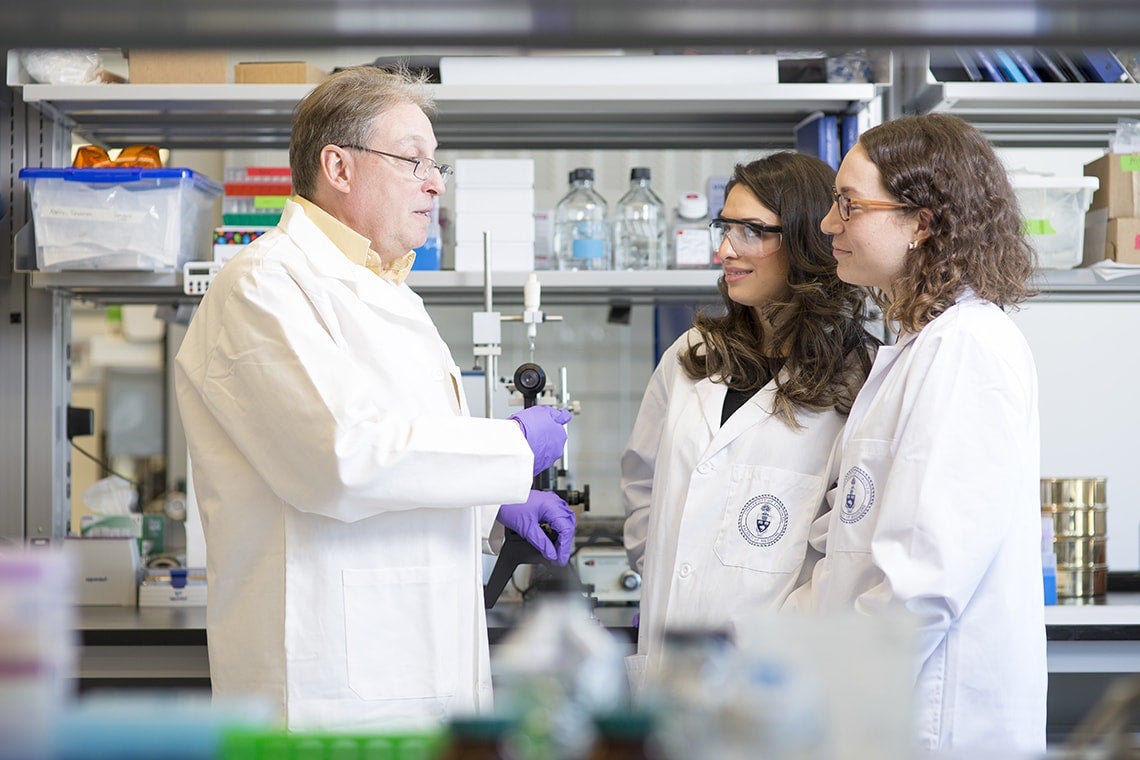 Professor Paul Santerre (left) with PhD candidates Yasaman Delaviz (centre) and Meghan Wright (right) in his lab. He is among the six recipients of the 2017 Governor General’s Innovation Awards (photo by Neil Ta)

The molecules he works with may be small, but Professor Paul Santerre is using them to solve some of the world's biggest and most pressing medical challenges.

One of Santerre’s most successful inventions is Endexo™, a surface-modifying material that can be applied to medical tubing to prevent blood from sticking and clotting, one of the major reasons for catheter failure. His U of T startup Interface Biologics (IBI) has three distinct molecule-based technology platforms, which can be applied to hundreds of different products and are estimated to be worth billions. He is a leader in engineering smart scaffolds to repair heart tissue.

Today, Santerre is one of six awardees being honoured with the 2017 Governor General’s Innovation Award. He'll will be recognized at a special ceremony at Rideau Hall on May 23.

“We’d like to congratulate Professor Santerre for winning the University of Toronto’s first-ever Governor General’s Innovation Award,” said Vivek Goel, the university’s vice-president of research and innovation. “This is a wonderful recognition of his cutting-edge research and his efforts to bring those innovations to market, enabling Canadians and others to lead healthier lives.”

For example, with Endexo, the flexible material used in medical tubing, it avoids the need for blood-thinning drugs. Santerre commercialized Endexo and other surface-modifying molecules through Interface Biologics, now in its sixteenth year.

Useful for far more than medical devices, Santerre’s surface-modifying technologies are designed to work in harmony with the body’s natural repair processes.

With a collaborative team at the Ted Rogers Centre for Heart Research, Santerre was recently awarded a three-year, $600,000 Collaborative Health Research Project grant to continue to develop a biodegradable cardiac patch. Adapted from the same basic concepts underlying his surface modifying molecules, the patch persuades damaged cardiac tissues to re-form while it slowly degrades into materials that the body can easily flush. Importantly, the materials in the patch will calm immune responses – preventing fibrotic scar tissue from forming on the heart – and reduce the risk of heart failure.

Yet another application of the technology could revolutionize how complicated craniofacial fractures are repaired. Rather than surgically inserting plates and metal screws into the head and face, a ceramic-based “bone tape” that promotes bone growth could be applied to fracture sites. Surgeons will be able to apply this ceramic-based bone tape directly to fractures without the added need for glue, screws or pins. Like with the heart patch, the materials are designed to calm immune responses and slowly biodegrade as new bone forms, ensuring better cosmetic outcomes as well as faster healing times.

“This is invention spinning off invention,” Santerre said, crediting his success as a researcher in part to the collaborative and cross-disciplinary culture being fostered by the university and its partnerships, such as that formed between Sick Kids, UHN, and U of T to create the Ted Rogers Centre for Heart Research, where Santerre’s lab is located. “It’s truly amazing to watch. When visitors come here they can’t believe its collaborative nature,” he added.

In addition to his own growing company, Santerre has been guiding his students in commercializing their discoveries through start-up companies, such as the recently founded Polumiros, which is developing its first product for market: a non-inflammatory, biodegradable “tissue filler” for replacing breast tissue after breast cancer surgeries. Santerre also helps to mentor more than 70 trainee-based startup companies across U of T in his role as co-director of the Faculty of Medicine’s Health Innovation Hub (H2i).

For Santerre, the H2i Hub and the other nine accelerators presently active on campus points to a seismic shift in Canada’s intellectual institutions, as the university aligns itself with entrepreneurship. It’s a move he views as critical to Canada’s economic development and its ability to compete in the global health care and innovation industries.

Health care represents the world’s largest and fastest growing economic market, contributing as much as $1 out of every $5 to the GDP in North America. But while Canada – Toronto in particular –is poised to become a world leader in this growth industry, Santerre points out that this can’t be accomplished without major investment from Canadian universities.

“The argument that academia should steer away from contributing to applied knowledge with an entrepreneurial perspective is no longer as tenable as it once was,” said Santerre, who was awarded the NSERC Synergy Award for Innovation in 2012, the Ernest C. Manning Innovation Award’s Principal Award in 2014, and U of T’s prestigious Connaught Innovation Award earlier this year.

“I extend to Paul my most sincere congratulations on this well-deserved honour,” said Daniel Haas, dean of the Faculty of Dentistry. “This award is a recognition of Paul’s ingenuity and drive to bring the University of Toronto, and by extension, Canada, to the forefront of the innovation industries through its applied and clinical research, and a direct reflection of his enormous impact.”

“Professor Santerre’s outstanding research and inventions are a brilliant example of how multidisciplinary collaboration can address complex challenges and help people live longer, healthier lives,” said Cristina Amon, aean of the Faculty of Applied Science & Engineering. “On behalf of the Faculty, my warmest congratulations to him on this richly deserved and prestigious recognition.”

Now in its second year, the Governor General Innovation Awards program recognizes “trailblazers and creators” who contribute to a culture of innovation in Canada.