U of T grads celebrate virtual convocation with videos, artwork – and a profound sense of accomplishment

Despite featuring several time-honoured traditions, the University of Toronto’s virtual spring convocation ceremony left plenty of room for the Class of 2021 to devise their own ways to mark the milestone – and many did just that.

Alyssa Raposo, a graduate from Victoria College who completed a double major in English and cinema studies, created a floral wall display at home by repurposing more than 100 pages of old assignments and course syllabi.

“Because we’re in a pandemic and we can’t meet in person, I wanted to do something special for myself at home to celebrate being a U of T graduate,” said Raposo, adding that the project allowed her to relive her U of T studies one paper at a time.

Others like Annie Sahagian, a U of T Scarborough graduate in media studies and gender studies whose family came to Canada as refugees from Syria, joined a social media trend that saw graduating students post short videos recapping their path to convocation. In Sahagian’s case: orientation, running for campus student unions, making the dean’s list and serving as a campus ambassador in last year’s virtual spring convocation ceremony.

Similarly, Amy Liu, who was graduating from U of T Mississauga, posted a video of a U of T journey that included photos of her with her “second family,” the campus’s competitive dance team.

In all, more than 15, 500 graduates from 105 different countries – from Afghanistan to Zimbabwe – were conferred their U of T degrees in absentia on Wednesday during the university’s third virtual convocation ceremony, necessary because of ongoing restrictions on in-person gatherings due to COVID-19.

President Meric Gertler welcomed graduates to the 600,000-strong family of U of T alumni, who include leaders in all walks of life, and noted that graduates would be invited back to campus by their divisions to celebrate their achievements in person once public health restrictions are lifted.

“We look forward to seeing you then and to acknowledging each of our graduating students at those celebrations,” he said.

Chancellor Rose Patten added that the Class of 2021 has “given us all very special reason to hope” and offered her congratulations.

“In meeting the historic challenges of the past year, you have demonstrated exemplary courage, perseverance and generosity,” she said. “These are the qualities of leadership that we need in our society now more than ever.”

Despite the unusual circumstances, the ceremony incorporated many U of T convocation traditions, beginning with the sound of the carillon bells from Soldiers’ Tower. Serving as bedel, Claire Kennedy, chair of Governing Council, carried U of T’s mace and led the chancellor’s procession that included student governors, Adanna Chigbo and Diana Li serving as esquires, as well as  President Gertler and the chancellor – all wearing academic regalia, masked and physically distanced. Inside Convocation Hall, U of T’s John Tuttle played the organ.

Near the end of the ceremony, student ambassadors and university leaders, representing U of T Scarborough, U of T Mississauga and the faculties, colleges and schools across U of T’s St. George campus, offered their congratulations to the Class of 2021.

Honorary degree recipient Harry LaForme, Canada’s first Indigenous appellate judge, addressed the Class of 2021 as convocation speaker. Also known as G’Najuwa Wawaskwene (powerful light in the sky), LaForme is Anishinabe of the Eagle Clan of the Mississaugas of the Credit First Nation – whose territory the university sits on. He reflected on his career in law and Indigenous advocacy and encouraged the graduating class to find their passion and work tirelessly at it.

“All of you will be part of the necessary changes that are coming,” he said. “You are our future, and I’m reassured by that. Be the zealous guardians of all of us, and know this: I have faith in you.” 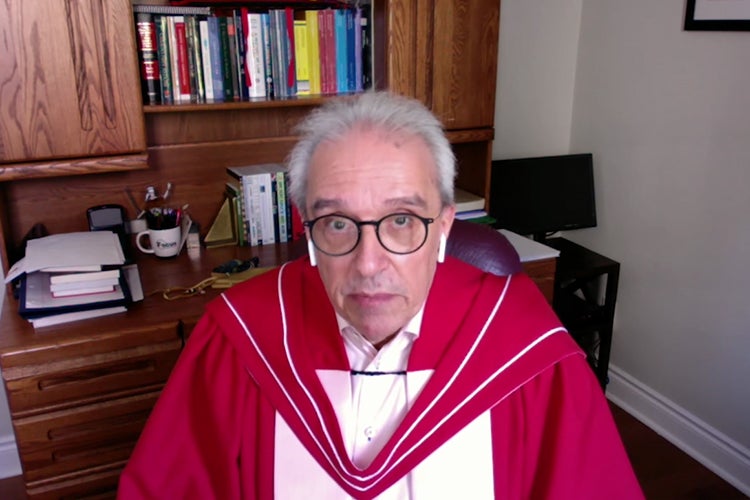 On Zoom and in bedrooms around the world, graduating students celebrated with their family and friends as the virtual ceremony aired at noon eastern time. The ceremony was viewed more than 20,000 times on Wednesday. For those who were unable to watch when it first aired, the video will be available to stream on U of T’s Convocation Hub.

Teodora Pasca, a graduate of the JD/MA (criminology) program in the Faculty of Law who plans to begin a clerkship this summer at the Ontario Superior Court of Justice, made sure to take a screenshot of her name when it rolled across the screen during the virtual ceremony.

“Viewed, screenshotted, meticulously text wrapped, saved in Microsoft Word, forever immortalized on my hard drive cause I have finally graduated with two degrees!!!” she tweeted.

The department of statistical sciences in the Faculty of Arts & Science created its own video for their graduates who earned their degrees in an improbably challenging year. Members of the department held up a sequence of personal messages to graduates, including “A Not Normal Congratulations.”

In the weeks leading up to virtual convocation, U of T staff were also hard at work preparing parchments to be couriered around the world. Still others pitched in by delivering a surprise GradBox to more than 300 U of T international students living in the Greater Toronto Area who couldn’t celebrate convocation with their families. 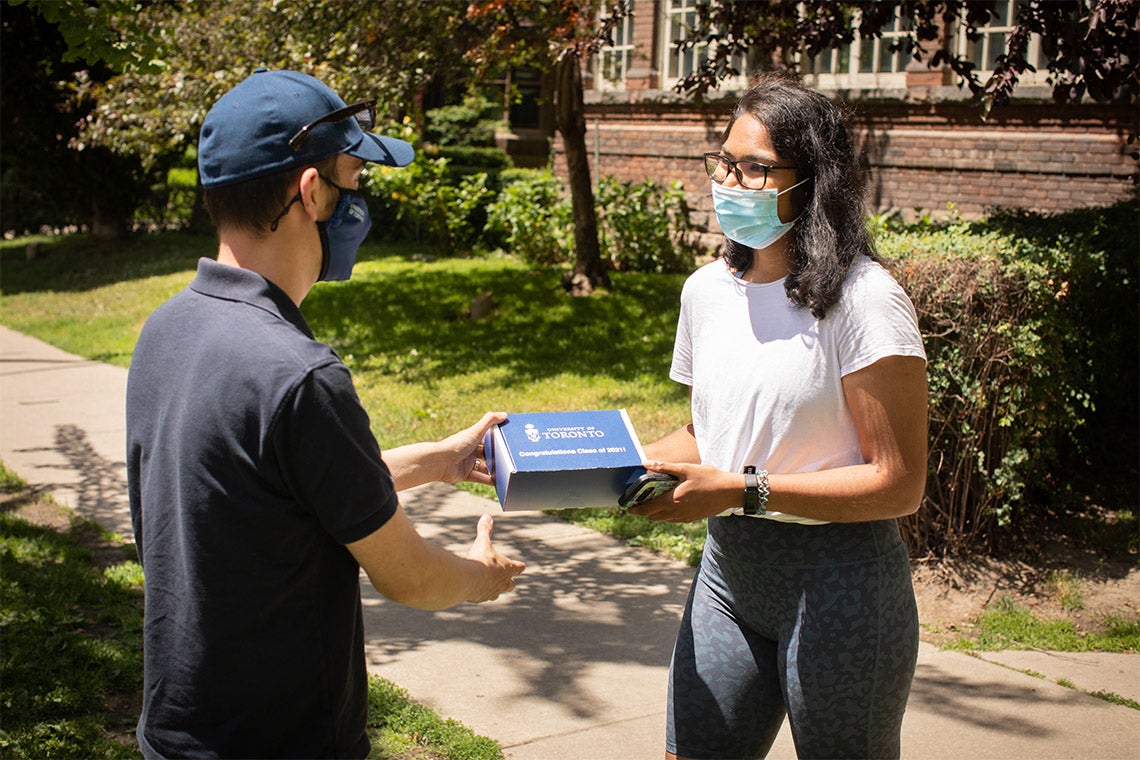 For Shayna Sayers-Wolfe, U of T’s virtual convocation was the culmination of a journey that began more than a decade ago.

She embarked on her undergraduate studies at Trent University in 2010 but later came to U of T – in part because she was interested in its sexual diversity and gender studies programs. At the same time, she landed a full-time job as a volunteer engagement worker at Planned Parenthood in the Teens Educating and Confronting Homophobia (TEACH) program. For nearly six years, Sayers-Wolfe was both a full-time student and a full-time employee. In other words: weekends off did not exist for her.

“Today feels surreal because it was so far away for so long,” said Sayers-Wolfe. “For a long time, I honestly didn’t think this day would come.”

day, 3 schools, 7 part time jobs, 1 full time job, countless roadblocks that could've stopped me (and did a couple of times), and a pandemic later, I officially finished the undergrad I started just over 10 years ago. Talk about #Pride #UofTGrad21 pic.twitter.com/OPDRfqL1yx

Sayers-Wolfe’s job was a perfect complement to her university studies. As she worked directly with LGBTQ2S+ communities in Toronto, she learned about each community’s history in her classes. By coincidence, her first assigned reading was written by the founder of the TEACH program.

“School had never felt so right to me,” said Sayers-Wolfe, who celebrated her graduation in her parents’ backyard with her grandparents. “It was like all the building blocks fell into place.

“For most of my life, I felt like I had a hard time keeping up. But throughout this entire decade of starting and stopping, it eventually became clear to me that there’s no such thing as being behind.

“You’re just where you are, and you’re always going to be where you’re supposed to be.”