U of T faculty, alumni and supporters named to Order of Canada 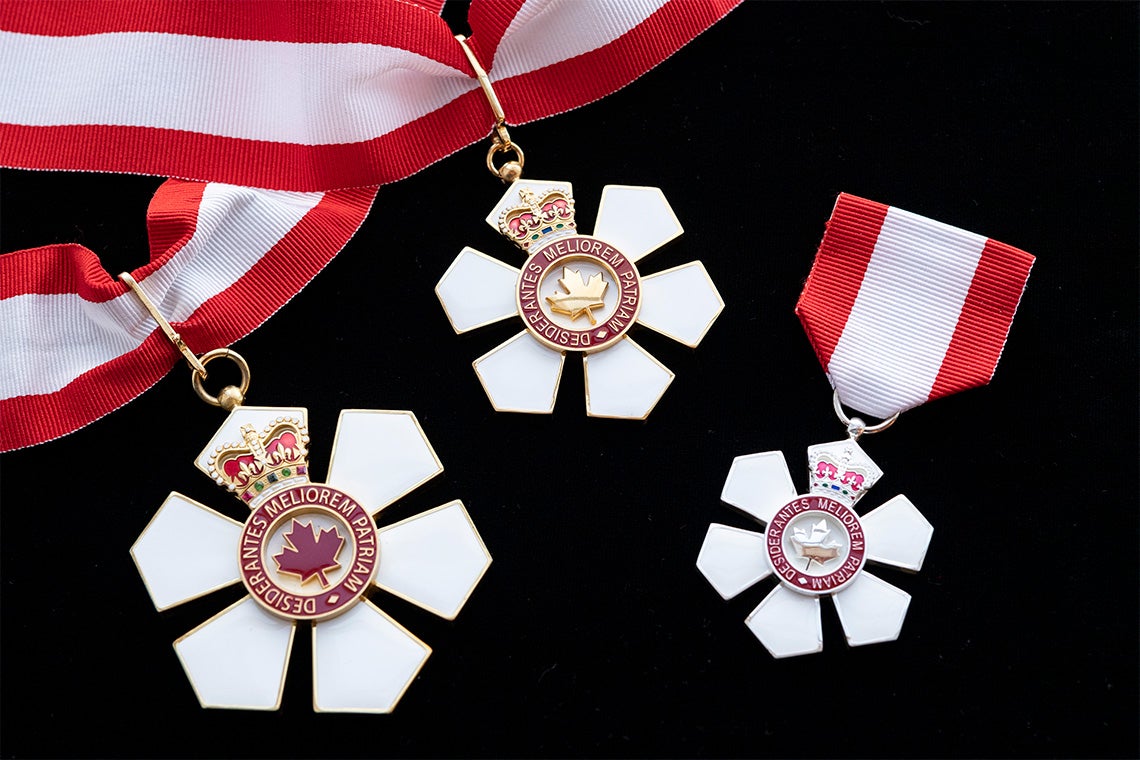 After making their mark in spheres ranging from health care to social justice, more than two dozen members of the University of Toronto community have been honoured with a new appointment to – or promotion within – the Order of Canada.

Among the U of T community members most recently named to the Order are: Professor Eleanor Fish, who has done groundbreaking work in the use of interferon-alpha in the treatment of disease; University Professor Emeritus Michael Patrick Collins, a world-renowned expert in concrete and structural engineering; Professor Gregory Marchildon, an expert in health-care policy; Professor Sharon Straus, who heads the knowledge translation program at St. Michael’s Hospital; and Professor Emerita Helene Polatajko, an internationally respected occupational therapy scholar.

Created in 1967, the Order of Canada is one of the country’s highest civilian honours. It recognizes people whose service, innovations and compassion shape Canadian society, foster imagination and unite people and communities.

A total of 135 appointments and promotions were announced on Dec. 29 by Gov. Gen. Mary Simon. 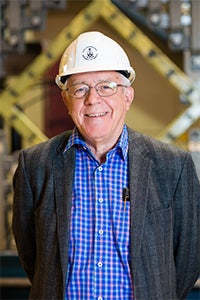 Michael Patrick Collins, a University Professor Emeritus in the department of civil and mineral engineering in the Faculty of Applied Science & Engineering, was named a Member of the Order for his research involving reinforced concrete. A world-renowned expert in his field, he addresses how engineers can prevent the collapse of buildings by using new approaches in design to better assess and repair structures.

Eleanor N. Fish, a professor in the department of immunology in the Temerty Faculty of Medicine and a senior scientist at University Health Network’s Toronto General Research Institute, was named a Member of the Order for her groundbreaking studies on the use of interferon-alpha in the treatment of disease. A U of T alumna, Fish is an expert in several infectious diseases including SARS, H1N1 and Ebola. Gregory Marchildon, a professor at the Institute of Health Policy, Management and Evaluation (IHPME) in the Dalla Lana School of Public Health and an Ontario Research Chair in Health Policy and System Design, was named a Member of the Order for his contributions to health-care policy in Canada and mentorship of the next generation of policy-oriented researchers.

Helene Polatajko, a professor emerita in the department of occupational science and occupational therapy in the Temerty Faculty of Medicine, was named an Officer of the Order for her work in significantly advancing the understanding of developmental co-ordination disorder in children. Polatajko, who earned her master’s degree and PhD from U of T’s Ontario Institute for Studies in Education (OISE) is an internationally recognized scholar of occupational therapy. 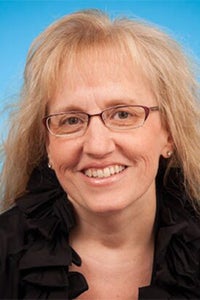 Sharon Straus, a professor in the department of medicine in the Temerty Faculty of Medicine with a cross appointment at IHPME who is director of the knowledge translation program and physician-in-chief at St. Michael’s Hospital, was named a Member of the Order for her academic contributions in the field of knowledge translation and mentorship in epidemiology. A U of T alumna, she has also conducted research on the transmission of COVID-19 in long-term care. 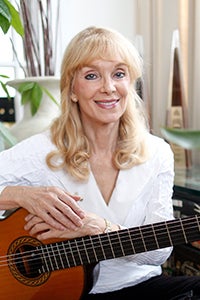 Liona Boyd is known as Canada’s “first lady of guitar.” Boyd was promoted to the rank of Officer in recognition of her contributions to music. The classical guitarist and five-time Juno Award winner graduated from the Faculty of Music and received an honorary degree in 2004. She has released 28 albums of classical, folk and world music and has composed and arranged hundreds of pieces for guitar.

Sandra Chapnik was named a Member for her leadership in the community and the legal sector. Chapnik, who graduated from U of T as a member of University College, is a former judge of the Superior Court of Justice for Ontario who has held many leadership roles in the community and is widely recognized for her efforts to promote the advancement of women and encourage best practices in the field.

Robert Eisenberg was named a Member for his commitment to the revitalization of Toronto’s architectural heritage, as well as his community service benefiting the environment and youth. Eisenberg, who graduated from U of T as a member of University College, is co-founder of York Heritage Properties, which known for its innovative and sustainable work in areas such as Liberty Village in Toronto.

Patricia Feheley, director of the Feheley Fine Arts and board member of the Cultural Human Resources Council and Canadian Eskimo Arts Council, was named a Member for her long-standing contributions to the country’s art scene, and for her promotion of Inuit art and culture. A former curator of the Ontario Science Centre and consultant with the Smithsonian Institute, Feheley earned a master’s degree in museum studies from U of T’s Faculty of Information.

Evelyn L. Forget, known for her work advancing anti-poverty initiatives in Canada and around the world as a leading health economics researcher, was named an Officer of the Order. Forget received her master’s degree and PhD from U of T. She is a professor of economics in the Rady Faculty of Health Sciences at the University of Manitoba.

Gerald Friesen, an author and professor of Canadian history with specialties in western Canada, Manitoba, labour and communication, was named a Member for his contributions to Canadian historical discourse through his inclusive and comprehensive research on Indigenous and ethnic groups in western regions. Friesen earned a PhD from U of T’s department of history in the Faculty of Arts & Science.

Janice Fukakusa was named a Member for her leadership and mentorship in banking, and for her boundless community engagement – notably in education and health care. Fukakusa, who earned a bachelor of arts degree from U of T as a member of Victoria College, is a former chief administrative officer and chief financial officer at RBC. She was also the first female chancellor of Ryerson University.

Nona Macdonald Heaslip, a retired public relations executive, was named a Member for her ongoing philanthropic contributions to Canada’s arts sector and for supporting academic scholarships across the country. Heaslip, who was the inaugural manager of public relations at U of T, earned a bachelor’s degree from U of T as a member of St. Michael’s College and an honorary degree in 2009. Heaslip has served on the boards of major theatres and, with her late husband, established the William and Nona Heaslip Scholarships to support education projects at 10 Canadian universities.

Tomson Highway: The acclaimed playwright and novelist was promoted to the rank of Officer in recognition of his distinguished contributions to theatre and Canadian culture. Renowned for such works as Dry Lips Oughta Move to Kapuskasing, The Rez Sisters, The Sage, and The Dancer and the Fool Highway is a former writer-in-residence and received an honorary degree from U of T in 2007.

William Humber, an author, journalist, environmentalist and educator, was named a Member for his contributions as Canada’s premier baseball historian, highlighting the many ways in which the sport’s history is linked to the nation. Humber, a selector for the Canadian Baseball Hall of Fame, Canada’s Sports Hall of Fame and the Clarington Sports Hall of Fame, earned a bachelor’s degree from U of T.

Barbara Landau, a lawyer, psychologist and author, was named a Member for her contributions to dispute resolution and family law reform, and for her advocacy of interfaith initiatives. Landau, who earned her bachelor of arts and law degrees from U of T, is lauded for her leadership in family mediation, justice and dispute resolution in Canada.

Patricia Livingston was named an Officer for her contributions to global health and anesthesia safety, as well as her commitment to improving medical education in underserved communities around the world. Livingston, who completed post-graduate medical training at U of T, is an associate professor at Dalhousie University.

Pradeep Merchant was named a Member for longstanding contributions to his community, including his philanthropy and leadership in the promotion of bilateral ties between Canada and India. Now serving as site chief of the Division of Neonatology at The Ottawa Hospital’s Civic Campus, Merchant previously completed a post-graduate neonatology fellowship with U of T’s Temerty Faculty of Medicine.

Lynn Posluns was named a Member for her contributions to research on women’s cognitive health and aging. Posluns, a philanthropist who is the founder and president of the Women’s Brain Health Initiative, earned an undergraduate degree in commerce and finance and a master’s degree in business administration at U of T before embarking on a career that included senior roles within the retail, fashion and private equity sectors.

Alexander Reford, a historian with a master’s degree in history from U of T, was named a Member in recognition of his leadership in the Canadian horticultural community, for bolstering regional tourism, and for promoting both heritage and environmental conservation. A former dean of St. Michael’s College and author of many books and articles on the history of Canada, Reford is the director of Jardins de Métis/Reford Gardens, a 200-acre national historic site on the St. Lawrence River created by his great-grandmother Elsie Reford.

Graham Sher was named an Officer for his contributions to public health, including his role in the development of Canada’s largest blood system operator. Sher, who completed post-graduate medical training at U of T, served as vice-president of medical, scientific and clinical management of Canadian Blood Services when it launched in 1998, and has been CEO since 2001. 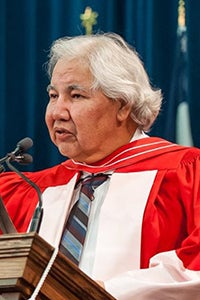 Murray Sinclair, the former senator and former chief commissioner of the Truth and Reconciliation Commission of Canada, was named a Companion of the Order – the highest rank – in recognition of his commitment to Indigenous legal issues and his dedication to reconciliation. Sinclair, whose Ojibway name Mizanay Gheezhik means “the one who speaks of pictures in the sky,” was the first Indigenous judge in Manitoba and the second in Canada. He received an honorary degree from U of T in 2017.

Carol Tator was named an Officer for her advocacy of social justice and commitment to identifying and dismantling systemic racism in Canadian society. Tator, who graduated from U of T as a member of University College, is a professor at York University and the co-author, with Frances Henry, of such books as The Colour of Democracy: Racism in Canadian Society.

Peter Vaughan, who received post-graduate medical training at U of T, was named a Member of the Order for his contributions to Canada’s health-care system, and for his pioneering leadership in the establishment and advancement of digital health. He was the deputy minister of health and wellness for Nova Scotia, CEO of the Canadian Medical Association and a Royal Canadian Air Force special operation flight surgeon and colonel commandant of the Royal Canadian Medical Services during the war in Afghanistan from 2001 to 2010.

Other new additions to the Order included: U of T supporters Graham Farquharson, Ralph Chiodo, Leo Goldhar, Vaikuntam Iyer Lakshmanan and Barbara Stymiest; former U of T professors Roderick McInnes and Peter Zandstra; and leaders from the public and private sectors such as Lawson Hunter, who attended the directors’ education program at U of T’s Rotman School of Management.

Did we miss anybody? If you know of an Order of Canada honouree with ties to U of T who was announced on Dec. 29, 2021 but isn't mentioned above, please let us know at uoftnews@utoronto.ca.