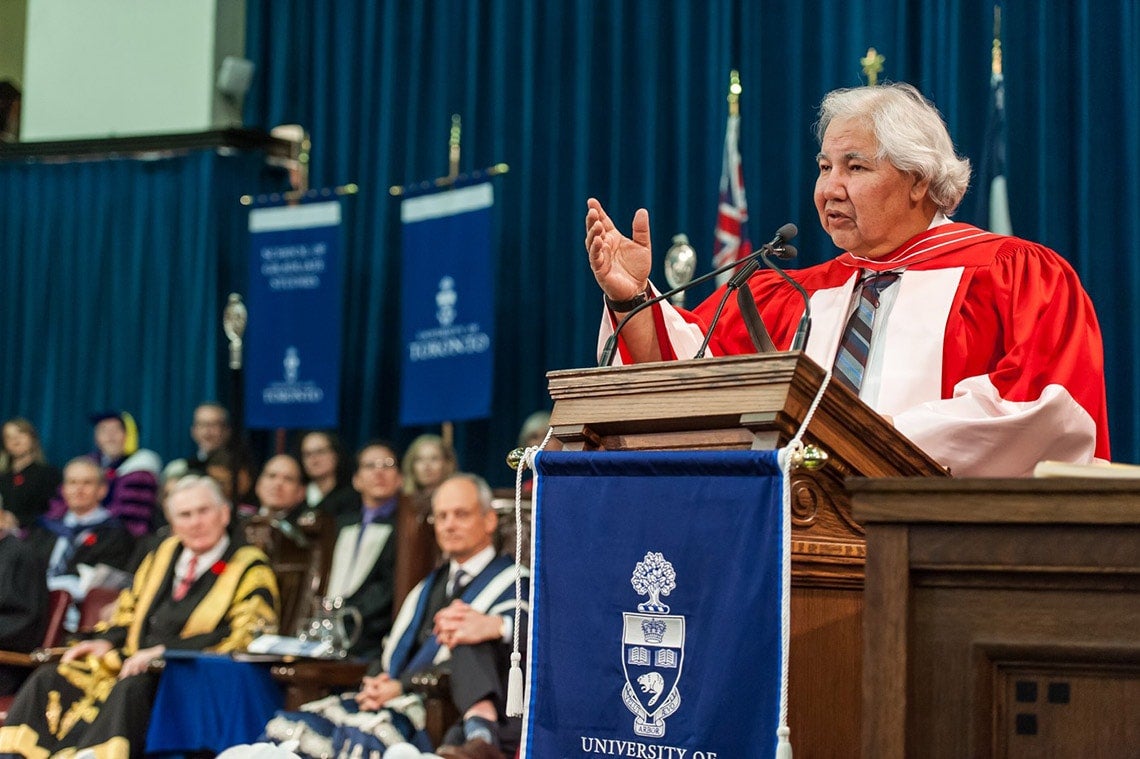 Senator Murray Sinclair, who was conferred the degree of Doctor of Laws, honoris causa, speaks to the graduating class on Monday (photo by Lisa Sakulensky)

Senator Murray Sinclair, the former chief commissioner of the Truth and Reconciliation Commission, has been awarded an honorary degree from the University of Toronto for his outstanding service to Canada as a lifelong advocate for Indigenous people.

As the head of the TRC, Sinclair travelled across Canada, participated in hundreds of emotionally charged hearings and gathered oral and written statements and testimonies from approximately 12,000 Indigenous people affected by Canada's system of Indian residential schools. Many survivors of the schools were speaking about their experience for the first time.

“I think Murray Sinclair is probably one of the bravest and strongest persons who has ever lived,” says Douglas Sanderson, associate professor in the Faculty of Law.

“Running a commission like that is monumental, just in terms of the administration of it,” says Sanderson, who is a member of the Opaskwayak Cree Nation.

“Senator Sinclair had to listen and read about it, and these are stories of such incredible and appalling abuse day after day for years to absorb that all and be able to press on and be sincere and kind and generous. That is such an amazing gift of humanity that very few people could do.”

The TRC’s work culminated in a five-volume final report that Sanderson calls “substantial, honest and thoughtful.” The report contained 94 “calls to action” for the Canadian government and Canadians to respond to in order to move towards reconciliation with Indigenous peoples. "Reconciliation is about atonement. It's about making amends. It's about apology. It's about recognizing responsibility. It's about accounting for what has gone on," said Sinclair in a speech earlier this year to the Canada School of Public Service. "But ultimately it's about commitment to maintaining that mutually respectful relationship throughout, recognizing that, even when you establish it, there will be challenges to it."

Sinclair – whose Ojibway name Mizanay Gheezhik means “the one who speaks of pictures in the sky” – grew up near Selkirk, Man. After his mother died when he was just a baby, he was raised by his kokum (grandmother). In an interview in Maclean's, Sinclair said members of his family went to residential schools and distrusted the schools as a result. In spite of this, he said his family instilled in him an “obligation to get an education and to do something with it.”

And that is exactly what he did.

Sinclair has served the justice system in Manitoba for more than 25 years. He was the first Aboriginal judge appointed in Manitoba, and the second in Canada. He served as co-chair of the Aboriginal Justice Inquiry in Manitoba before being appointed as chief commissioner for the TRC. (From left): U of T Scarborough’s Indigenous Elder Wendy Phillips, Senator Murray Sinclair, U of T Chancellor Michael Wilson and U of T President Meric Gertler (photo by Lisa Sakulensky)

Sinclair worked on the TRC from June 2009 until its completion in December 2015.

He was appointed to the Senate of Canada in March 2016 and recently, following the deaths of several Indigenous youths in Thunder Bay, was appointed by the Ontario Civilian Police Commission (OCPC) as the independent investigator to look into the Thunder Bay Police Services Board.

Sinclair's work has had an impact at the U of T as well. President Meric Gertler and Vice-President and Provost Cheryl Regehr established a TRC steering committee in early 2016. After much deliberation and many discussions, the committee released its final report, Wecheehetowin, with 34 calls to action for the university to work towards reconciliation with Indigenous peoples. Faculties, departments and individuals have started to work on ways they can change their practices and spaces and create a more inclusive environment for Indigenous peoples, cultures and knowledges. Andrew Wesley, an Elder-in-Residence at U of T who advised the university's TRC steering committee in its deliberations and presented the final report to Gertler and Regehr at an entrustment ceremony in January, was present when Sinclair was conferred the degree of Doctor of Laws, honoris causa.

U of T Scarborough’s Indigenous Elder Wendy Phillips gave Sinclair an Eagle feather, and an honour song was performed by the Red Hawk Singers.

Sanderson was also present with a hand drum, which he sounded at various moments as a way to celebrate and honour Sinclair for his work in changing the dialogue about Indigenous peoples, cultures and knowledges in Canada.

“The work of the Truth and Reconciliation commission set the stage for the possibility of long-term change,” says Sanderson. “And it’s up to institutions like the university to embrace conceptual change and not just ticking the box because that’s just one step in a very long journey of change.”

Read about Truth and Reconciliation at U of T