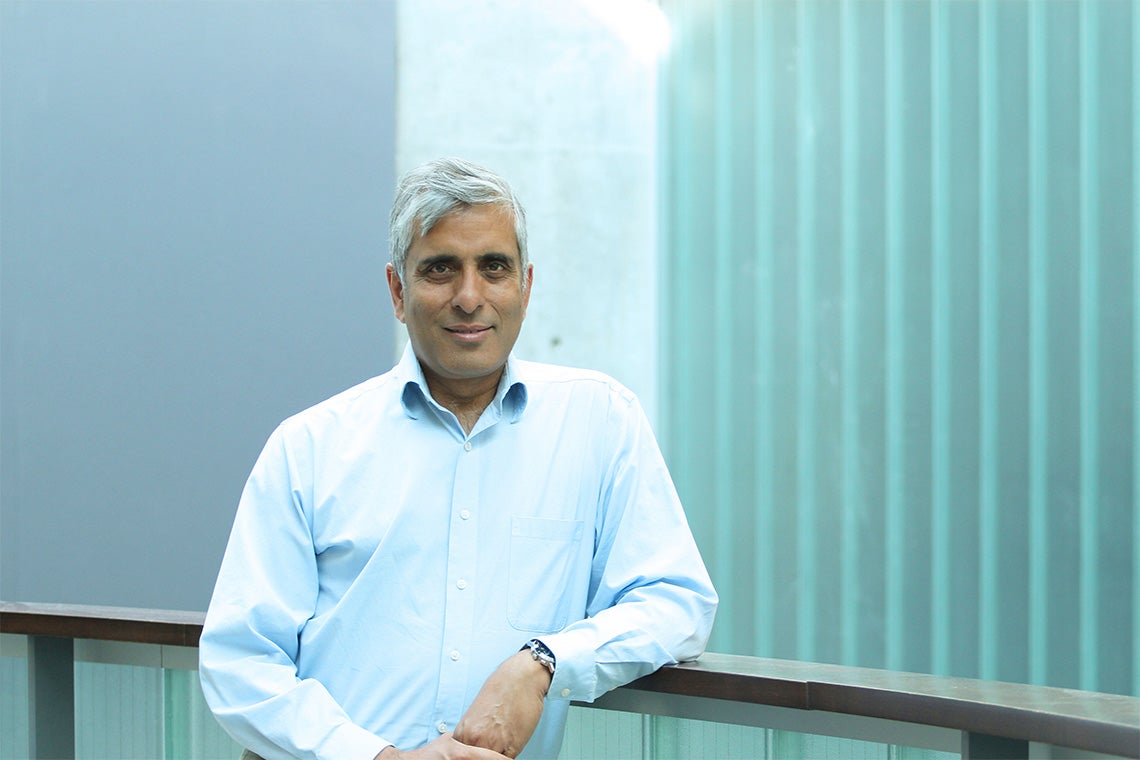 The federal government recently announced a nationwide consultation on digital and data transformation, with roundtables that will inform the government’s plan for steering innovation in the data economy including the future of work and Canadians’ data privacy.

Navdeep Bains, minister of innovation, science and economic development, announced the roundtables will be led by six digital innovation leaders, including the University of Toronto's Arvind Gupta, a professor of computer science, and Ilse Treurnicht, the former CEO of MaRS Discovery District who was awarded a Doctor of Laws, honoris causa, by U of T this summer. Both are leading Toronto’s first roundtable today at the Fields Institute.

“Dr. Treurnicht and I want to understand how companies can be scaled more effectively in the digital space,” says Gupta. “One of the challenges we're having is Canadian companies are not scaling from small to medium to large.”

Gupta, who served as president of the University of British Columbia from 2014-2015, earned both his master’s degree and PhD from U of T in computer science. He co-founded Mitacs, a national non-profit that fosters industry research projects led by graduate students, and was the organization’s first scientific director and CEO.

Since returning to his alma mater this summer, Gupta helped found the Centre for Quantitative Analysis and Modelling (Fields-CQAM) based at the Fields Institute. U of T is one of nine partner universities in this initiative supported by the Ontario government. U of T computer science Assistant Professor Alec Jacobson and Associate Professor Daniel Wigdor are each leading major research projects as part of Fields-CQAM.

“The disruptive technologies in the last 20 years – from nanotechnology, to quantum computing and machine learning – are a mix of statistical, computational and mathematical sciences,” says Gupta. “It's a good bet that we should focus on those areas. But let’s also start looking at problems we have no idea how to solve, gather smart people and start thinking about them. The payoff is immense if we can develop the next disruptive technologies.”

U of T’s Nina Haikara spoke to Gupta about the opportunities in digital and data innovation.

Why should these roundtables on digital and data transformation be of interest to Canadians?

There have been a number of consultations happening over the last few years. During the last set of innovation agenda consultations in 2016, there was major interest by Canadians in participating in these conversations.

Before the federal government brings out a new game plan around digital, they want to understand, across society, how different population groups will be impacted by any changes. Organizations that represent the business community will be consulted. But we also want to be inclusive and speak with businesses that are at risk, Indigenous Canadians and immigrant groups. We want to hear from those who want to participate more significantly in the innovation economy and are looking at how they might be supported.

How are Canadians invited to participate?

It’s a combination of tapping many networks, including innovation leaders, those who approach the minister’s office and those who express interest through the website.

I would strongly encourage everyone to visit the website and send in a written submission, or ask to be part of a roundtable and what you might contribute. I know the minister wants to ensure as broad a cross-section as possible is represented.

What will be discussed during the first roundtable in Toronto?

There are three main topics: the future of work, trust and privacy and unleashing innovation. The six roundtable leaders have a little bit of flexibility in what their emphasis will be.

At this first roundtable, we want to understand what might be hampering companies from incubating and growing in the innovation space. We will look at issues such as intellectual property, whether some parts of the venture capital space are not working, whether there are challenges in some government programs, and whether we have challenges in recruiting the best and brightest.

One area that I find particularly interesting is how we can further enhance the digital ecosystem in Toronto. There are a lot of head offices and a lot of startups in Toronto and we want to be sure these two ecosystems are linked effectively.

Where do you see innovation happening in Canada?

We're doing extremely well on startups and Canada is a leader in building a robust startup space. Our universities and the quality of research they produce is extremely high, with Canada in the top five in many digital fields. Superclusters are an example of how we can create value chains for innovation. The question is: What can we do to boost the digital space?

Where are the innovation gaps?

We need to increase the number of graduates, especially at the master's and PhD level, with digital skills. We're not doing well in the participation of women, aboriginals and immigrants. Some countries have done a much better job with broader participation than us.

My main focus is why we rank so low in technology deployment by the private sector. We are roughly 15th in the OECD [Organization for Economic Co-operation and Development] – and that's pretty poor. Fifty years ago we were one of the world leaders in telecommunications and that's slipped. We have challenges such as a high cost for mobile and continuing lack of access to broadband in many parts of the country.

Toronto is a shining light for Canada. The city has been ranked number one in North America for digital job creation two years running, far ahead of Silicon Valley and New York and Boston. So what a huge opportunity for Toronto – but that means we've got to get all the pieces working right.

Tell me about your role as academic director, professional programs in the department of computer science?

We haven't put a lot of emphasis on research-level programs that train people to be researchers in the private sector even while the private sector's focus on research is growing. More companies are building bonafide research facilities. For the last 40, 50 years, we've said to companies: use the university research capability for your research. And that's worked. But now companies are realizing their future depends on being cutting-edge or thinking well beyond their current product.

I've been very interested in this for at least 15 years now: how do you train people to do industrial research? It’s what we started at Mitacs. But I think we're still just at the cusp of learning how to do this. From what I’ve seen, U of T computer science’s Master in Applied Computing is among the best programs in the world for taking on this challenge. We are ahead of the curve and I am intrigued about the possibilities. We still have to think about concentrations, student courses, how to partner with industry, etcetera. So for me this is a golden opportunity to help build an international success story.