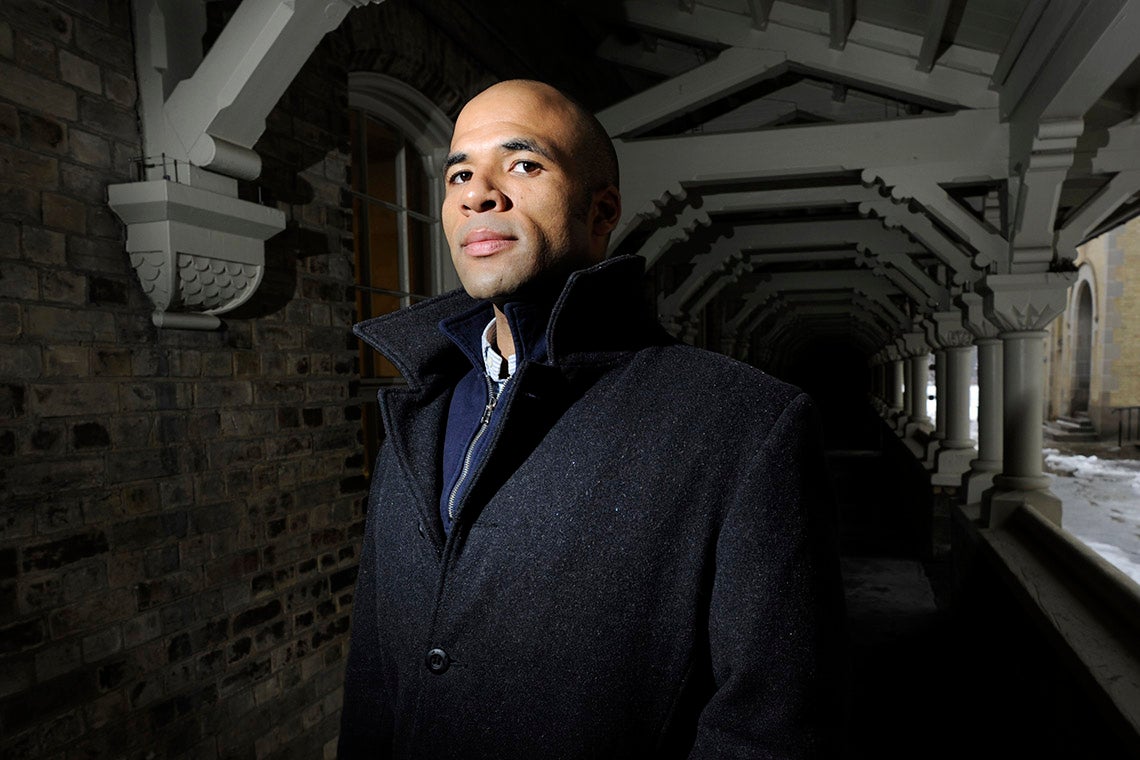 Akwasi Owusu-Bempah, an assistant professor of sociology at the University of Toronto Mississauga, is the director of research for the Campaign for Cannabis Amnesty, a non-profit advocacy organization (photo by Jim Rankin/Toronto Star via Getty Images)

On Wednesday, the day that cannabis became legal in Canada, the federal government announced that it will bring in legislation to allow Canadians with criminal convictions for small amounts of marijuana apply for pardons.

It's an issue that Akwasi Owusu-Bempah, an assistant professor of sociology at the University of Toronto Mississauga, has been at the centre of as the director of research for the Campaign for Cannabis Amnesty, a non-profit advocacy organization.

On Oct. 26, he will give a TEDxToronto talk on his work, which focuses on race and policing and the criminal justice system.

He talked to Kim Honey of U ofT News about legalization, border crossings, and how racialized Canadians are disproportionately affected by drug laws.

Cannabis is now legal. What do you think is going to happen, especially with young people?

Canada has some of the highest rates of youth cannabis use in the world, and our young people are already using the drug at fairly high rates. It’s becoming more and more socially acceptable. It's not uncommon for me to be wandering through campus or around downtown Toronto and smell cannabis frequently. Some people have said that Oct. 17 will become the new 4/20 – April 20 being one of the days that cannabis culture celebrates – and that might happen. But I'm not expecting anything kind of world-changing to happen.

Decriminalizing possession is something that you strongly feel has been a long time coming?

Yes, absolutely. From my perspective, the fact that people are being saddled with criminal records that can impact their lives is much more harmful than any of the effects of using the drug itself.

Canada has had a liberal attitude to cannabis, where police might stop you if you had a certain amount and let you go. What effect has that had?

The police have a lot of discretion. For a lot of Canadian history, police have exercised that discretion and turned a blind eye for some, but certainly not all people. For most of human history, drugs have not been illegal, and drugs have been criminalized largely to control a certain population.

Our first drug law was the Opium Act of 1908. This came directly in response to concern over the presence of Asian immigrants on the West Coast. Once the railroad was complete, those Asian labourers were competition for white labour. So this created a fair bit of social unrest, including the anti-Asiatic riots in the early 20th century.

I knew that criminal convictions are disproportionate for racialized and Indigenous people, but it goes back that far?

Our first racialized drug law was actually the prohibition of alcohol, which was exercised with Indigenous populations. Marijuana was outlawed in 1923, but few people were arrested. That did start to increase in the 1950s and 1960s, and this was largely a concern here and south of the border about who was using. It was the hippies, the Communists – those who were looked at as socially undesirable and perhaps a threat to the dominant order.

We often think of ourselves as having been pretty liberal with respect to drugs generally and cannabis in particular, but this hasn't been the case. We’ve got tens of thousands of people being arrested for cannabis use in Canada each year. And this varies from year to year and also across the country, but dating back to 2000, estimates are as many as 500,000 people in Canada have a criminal record for cannabis possession.

We do not know exactly how many are racialized. We do have relatively good data showing that it has been largely Indigenous people and Black Canadians who've been targeted for cannabis possession arrest, even though we know that rates of cannabis use are relatively similar across racial groups.

How will that affect who will be stopped at the U.S. border?

Those arrests go into the Canadian Police Information Centre system, and that information is accessible by American customs officials. We can suspect border services are going to be more likely to ask them because of stereotypes, equating those groups with drug use.  But they're also more likely to have their data in that system, because they've been more likely to be arrested. The problem is that that burden has been disproportionately placed on these racialized populations. And it’s not just the border, it’s completing education, it’s gaining employment. We're seeing increasingly that you can't get housing, and then of course there's the travelling.

One of the questions that can trip people up at the border is “have you used before?”

Yes, and if you admit to having used it in your lifetime, then that is grounds for American customs to deny you entry and to do so for life. But now that it will be legal, even if you've used it under our legal regime, they will turn you away.

So what happens if you lie and say no?

You don't want to lie, because if you're caught lying, then you can also be banned for life.

What would you advise students who are worried about traveling to or through the U.S.?

Just be careful about what information might be publicly accessible. We know that border services have access to public social media profiles, but we understand they're also increasingly asking people to look through their phones.

Why is an amnesty important for possession convictions?

One thing that we have to consider is there will now be more laws around the cannabis plant after legalization than there were before. There are still a number of ways that people can become criminalized. There will be the possession of illicit cannabis, concerns around impaired driving, trafficking, and sharing with minors. So amnesty’s certainly not going to make everything go away, because there are so many things that are illegal.

But amnesty is important to us in order to right history’s wrongs. The least we can do for people who have been convicted of crimes that are no longer illegal is to erase those criminal records.