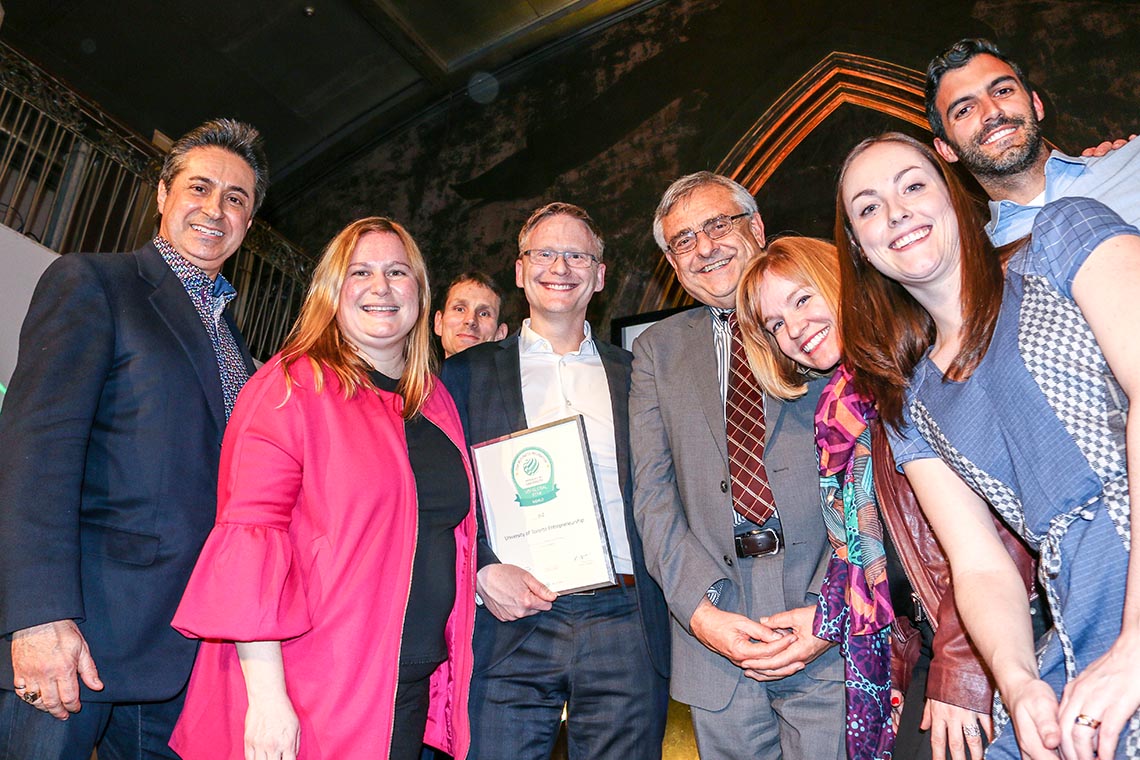 Members of University of Toronto Entrepreneurship pose with Dr. Tom Corr (fourth from right), president and CEO of Ontario Centres of Excellence, at the UBI Gala in Toronto (photo by Jennifer Robinson)

The University of Toronto is among the top five best global universities for fostering startups, says UBI Global, a Stockholm-based research and advisory firm that ranks top business incubators and accelerators.

“This is amazing news and an important recognition of the growing international status of our entrepreneurship community at U of T,” said Vivek Goel, vice-president of research and innovation.

“The breadth and depth of U of T’s research expertise coupled with the entrepreneurial talent, ideas and drive of our students and faculty has created a rich, dynamic environment to grow the next great global startups," he said.

“We’d also like to thank the Province of Ontario for their strong support of student entrepreneurship opportunities across the province, which is why Ontario incubators had a very strong showing across the board.”

In the past five years, the University of Toronto has created more than 150 companies, generating more than $500 million in investment.

On Thursday, UBI Global ranked University of Toronto Entrepreneurship among the world’s top five university-managed business incubators. This marks the first time the university has participated in the UBI ranking program, which produces its global benchmark report every two years.

The independent firm, which assessed almost 1,400 programs in 53 countries, announced the rankings in four categories in Toronto at the 2018 World Incubation Summit.

The news comes as U of T begins its second annual Entrepreneurship @ U of T Week on Monday. The week-long community celebration, which involves talks with business leaders and workshops for student entrepreneurs, culminates on Thursday, March 1 with the Startup Showcase, where members of the public can talk with U of T’s student entrepreneurs and see their innovative products firsthand.

“By highlighting the impact and performance of these programs, we are not only helping incubators and accelerators to become more efficient, but we are also assisting government officials in developing their respective innovation ecosystems,” said UBI Global CEO and co-founder Ali Amin in the statement.

“The benchmark and rankings also enable corporations to make informed partnership and investment decisions about the incubation programs and the startups they intend to engage with.”

Unlike most universities, U of T has nine startup incubators across its three campuses, which help foster student and researcher startups at all stages of development and in a wide variety of areas, from artificial intelligence and quantum computing to health-care innovations and mobile apps for consumers.

There are also 200 courses and programs available and the opportunity to attend countless events which attract more than 25,000 year student participants each year. The community also has new space  for entrepreneurs to work, network and hold meetings at ONRamp, which opened last fall, as well as the state-of-the-art Centre for Engineering Innovation & Entrepreneurship, which will open soon.

“For such a large school, it just seems like everyone has this buy-in [for entrepreneurship] which you just don’t typically see,” said Gurinder (Gary) Sangha, a serial entrepreneur who recently joined U of T’s 22-member Entrepreneurship Leadership Council.