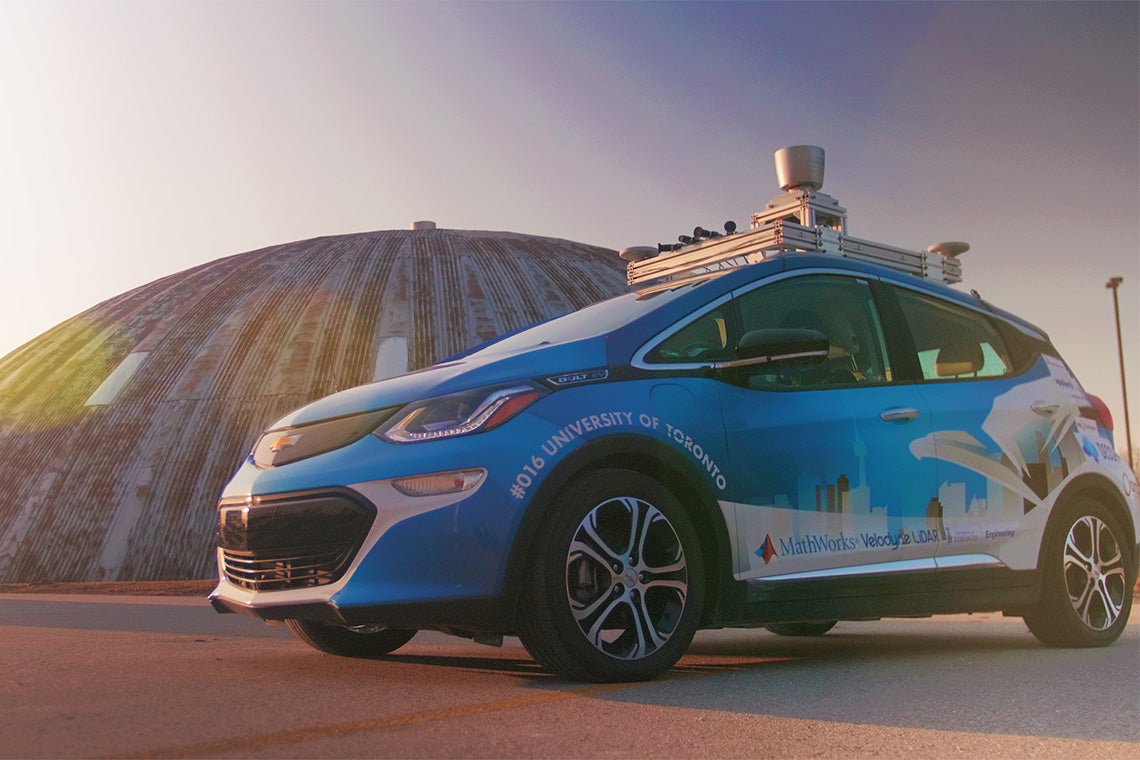 A team of students from U of T Engineering won the annual competition with their self-driving electric car "Zeus," pictured here outside the MarsDome at the University of Toronto Institute for Aerospace Studies (photo by Chude Qian)

The University of Toronto team participating in the international AutoDrive Challenge recently placed first in a virtual competition to demonstrate the capabilities of its self-driving electric vehicle –  the fourth year in a row that the team has come out on top.

The team, known as aUToronto, consists of more than 70 members, most of whom are undergraduate or graduate students in the Faculty of Applied Science & Engineering.

Together, they’ve retrofitted a Chevrolet Bolt – named Zeus – with a suite of sensors, including visual cameras, radar and lidar. Additional hardware and student-designed software inside the car processes the signals and converts them into commands that enable the car to drive itself safely and efficiently.

“We’re elated to see this continued validation of our team’s efforts,” says PhD candidate Keenan Burnett, a former captain of the team who has continued to act as a key adviser in the latest competition.“We try our best to stay competitive and not let our past wins make us complacent. We use ourselves as our benchmark for success, continually trying to outdo ourselves and improve on our previous iterations.”

The team’s faculty supervisors include Tim Barfoot, Angela Schoellig and Steven Waslander of the U of T Institute for Aerospace Studies, or UTIAS.

“Despite all the challenges of keeping the team going throughout COVID, our students have had a great year of learning about self-driving technology, working in a team, and pushing their limits,” says Barfoot. “I couldn’t be more proud of our aUToronto team once again for another great year in the Autodrive competition.”

“A tremendous amount of effort went into succeeding this year,” adds Schoellig. “We had to accomplish new and more advanced autonomous driving tasks, complete more sophisticated simulation challenges, and prove the safety of our car. This win reflects our team’s continued technical, collaboration and communication strength. I am extremely proud to work together with such a capable team.”

Zeus has taken the top spot in each of the competition’s previously yearly meets: the 2018 meet in Yuma, Ariz., the 2019 meet in Ann Arbor, Mich. and a virtual competition held in the fall of 2020.

“The vehicles are tasked with navigating multiple destinations while handling various traffic scenarios. One particular interesting requirement this year is that we need to reach SAE J3016 Level standard for the loss-of-GPS scenario: the vehicle must perform fallback strategies to either continue the task or pull to the road shoulder when GPS signal is lost.”

While the teams based in the U.S. were able to meet in person in Ann Arbor, the Canadian teams competed by means of reports, presentations, simulations and video demos. Qian says the team is used to this format since much of the work on the car has been done virtually for the past year.

“We managed to get a small task force to perform real-world tests one or two days per week,” says Qian. “After testing, they would share demo videos and results to the team. We also developed an automatic evaluation system that leverages various simulation environments. It runs daily on our deployment server against a set of test scenarios, and it has greatly improved our development efficiency.”

As for the next steps, aUToronto has already been selected to compete in the SAE AutoDrive Challenge II, scheduled to begin this fall. They will have a new car and new competition, and they are actively recruiting new team members as well.

“We will be getting a brand new GM Chevy Bolt EUV 2022 to build up our autonomy system from the ground up,” says master’s student Frank (Chude) Qian, who will lead the team for the AutoDrive Challenge II.

“We hope to develop our vehicle with real-world driving scenarios, apply industry safety standards and bring awareness and assurance to the general public about autonomous vehicles. We are excited to compete with the new universities and hopefully continuing our winning streak.”