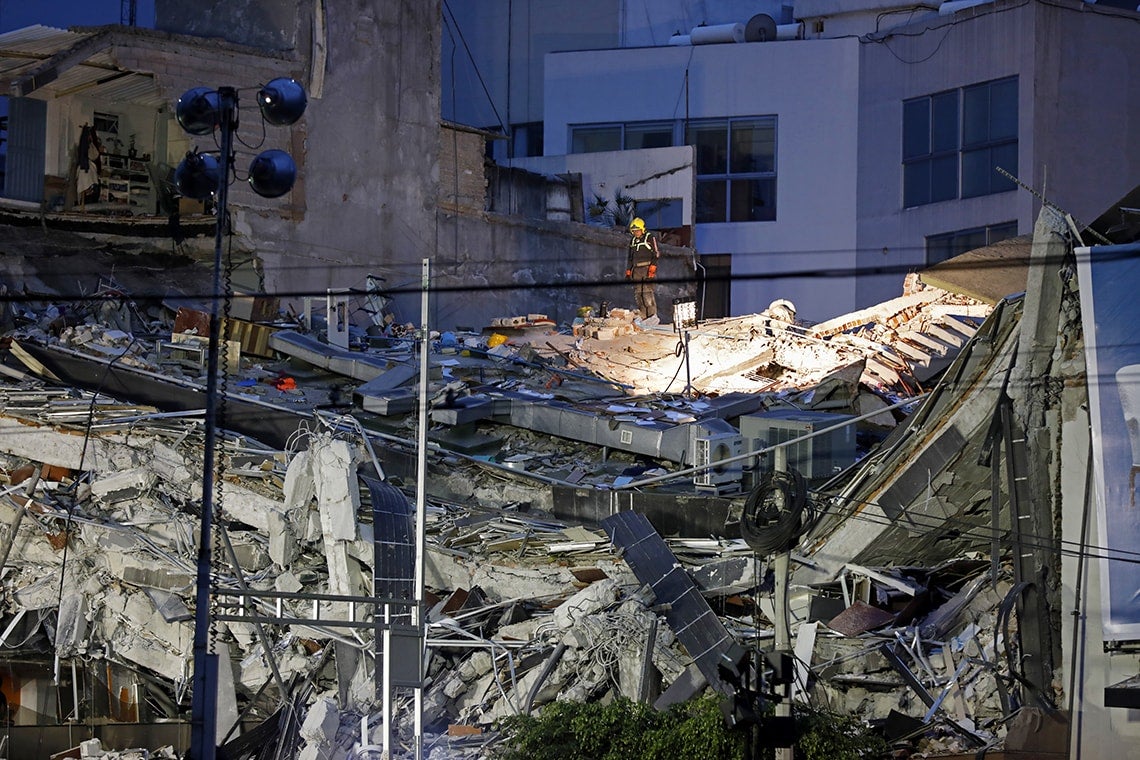 Rescuers continue to search for people in a crumpled office building in Mexico City after a 7.1-magnitude earthquake (photo by Gary Coronado/Los Angeles Times via Getty Images)

More than 200 people have been killed after a powerful earthquake struck Mexico for a second time in less than two weeks.

Rescuers are still scrambling to reach survivors trapped inside toppled buildings, including a primary school in southern Mexico City.

The 7.1-magnitude quake Tuesday is the deadliest earthquake in Mexico in 30 years, occurring on the anniversary of an earthquake in 1985 that killed as many as 10,000 people.

Qinya Liu, an associate professor of physics and Earth sciences at the Faculty of Arts & Science, says Tuesday's earthquake was caused by the “subduction” of the Cocos tectonic plate.

The country sits at the boundary of three pieces of the Earth’s crust, called tectonic plates, which come together in kind of a jigsaw puzzle, with the ocean floor of the Cocos plate forcing its way down, i.e. subducting, beneath the continental edge of the North American plate. Experts say these subduction zones are prone to large earthquakes.

Russell Pysklywec, professor and chair of Earth sciences, says the two earthquakes could be related.

“Quite often one of these earthquakes can spawn another,” he says. “It can induce seismic activity locally, on a similar fault that could be connected.”

He supervised a study last year showing that ancient geologic events have left scars within plates that can also trigger earthquakes. The study helped change the widespread view that only interactions at boundaries between tectonic plates can cause earthquakes. The Mexican earthquakes likely occurred because of intraplate bending of the subducting slab, he says.

Both U of T experts say there's no evidence of a connection to the planet's overall warming, but Liu is worried about sizable aftershocks and the potential eruption of volcanoes in the region. The Popocatépetl volcano burst at the same time as the earthquake on Tuesday.

Qinya Liu: This magnitude-7.1 central Mexico event occurs as a result of the subduction of Cocos plate beneath the North American plate. It did not occur right on the plate boundary but is most likely an intraplate earthquake within the subducting Cocos slab.

Russell Pysklywec: An earthquake occurs when there's release of energy with slip or fracture of rock within the Earth, with the plate motions providing a massive amount of energy. Mexico is adjacent to a plate tectonic boundary. In some ways, the region is primed for this activity because its two plates that are actively colliding. The subducting Pacific plate is going down beneath North America and providing the stresses that are required for this earthquake.

Are the two earthquakes related?

Russell Pysklywec: It wouldn't be surprising if they were connected. Quite often one of these earthquakes can spawn another. It can induce seismic activity locally, on a similar fault that could be connected. But we don't know 100 per cent for sure. Maybe it is complete coincidence that they occurred like that, but probably not because they were kind of similar depths and separated by 650 kilometres. In the grand scheme of things, that's fairly close. So probably they were related. Quite often we'll see aftershocks to an earthquake, and maybe this is one of those types of manifestations.

Qinya Liu: At this moment, no direct evidence has shown that these two events are related. We know that the seismic hazard in several regions of Mexico are quite high, which is mostly due to the subduction of Cocos plate as well as the relative motion of Caribbean plate to the east. The Sept. 7th event is about 650 kilometres to the southeast of this event and closer to the Middle American Trench (another major subduction zone, an oceanic trench in the eastern Pacific Ocean, stretching from central Mexico to Costa Rica).

Prof. Pysklywec, how are these earthquakes similar to findings from the 2016 study?

Russell Pysklywec: They're similar to our study in that it's talking about tectonic activity in what you call an intraplate area. It's not occuring right at the plate boundary or the interfaces between two plates. It's related to the stresses within the plate, deep down. The subducting plate is bending down, and that seemed to cause the earthquake. In that sense, it's interesting because it's a sort of fracture in the intraplate region of the tectonic plate.

The scars we discuss in our paper are within the interior of a tectonic plate in an intraplate region, and that's what the United States Geological Survey was saying about these Mexican earthquakes as well. On the other hand, the Mexican events are close to the plate boundary. The plate motion primes these things for activity, and that's probably what happened here. The plate motion provides the stresses involved that cause the plate bending.

In general, it helps our understanding of how tectonic activity can occur within a plate. In the case of Mexico, the scars and fractures are young. In our study, those were old, ancient scars.

People are really worried about instability on the planet and climate change. There's hurricanes and earthquakes seemingly happening at once. Is this earthquake related in any way to climate change, or the severity of the hurricanes in the region?

Qinya Liu: There is no robust evidence that links earthquakes directly to atmopheric processes. Earthquakes occur deep inside the Earth – this event is about 51 kilometres deep – as a result of accumulated strain on faults over tens to hundreds of years.

Russell Pysklywec: No. It's hard to say for sure. As far as we know, no. We don't seem to have any reason to think there's anthropogenic forcings on the seismic cycle.

Are there concerns about aftershocks?

Qinya Liu: Many aftershocks will ensue, even with magnitudes around 5.

Also, central Mexico has a chain of volcanoes associated with the subduction of Cocos plate, eruptions of volcanoes close to the epicentre may be expected due to the strong shaking from this earthquake, as have just been reported at the nearby Popocatépetl volcano.