U of T art installation pulls back curtain on molecular science 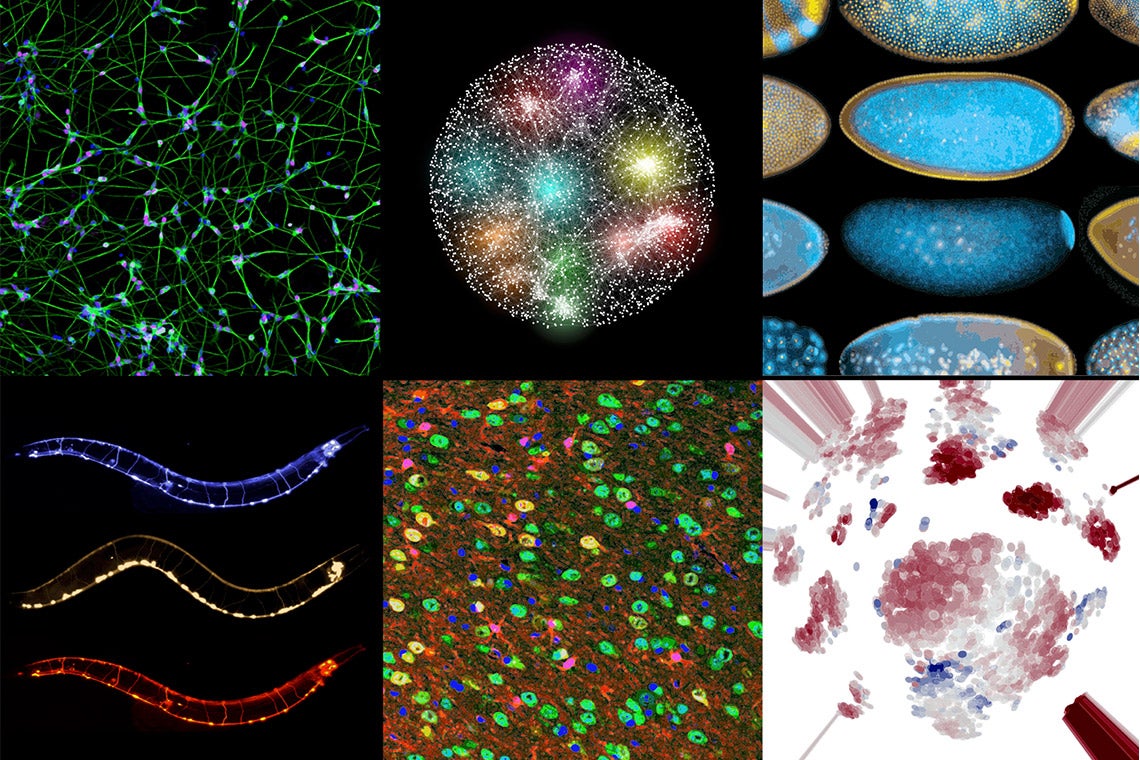 A remarkable collection of images normally reserved for the eyes of scientists is now available to the University of Toronto community via an exhibition celebrating cutting-edge research in biomedicine.

The recently unveiled installation, which won’t be available for general viewing until pandemic restrictions ease, features stunning data visualizations and microscopy images created by U of T researchers working in the fields of genomics, computational biology and bioengineering in the Donnelly Centre for Cellular and Biomolecular Research at the Temerty Faculty of Medicine.

Envisioned as a single art piece, the installation comprises 10 images depicting diverse research projects pursued by the centre’s investigators. These include the world’s first complete genetic network of a cell resembling a dandelion, grown-from-scratch human nerve fibers lacing the surface of a Petri dish that hold potential for regenerative medicine and the world’s first map of the human liver at the molecular level that could unlock future treatments.

With the individual pieces laser-printed on aluminum panels, which heightens image quality and preserves colour from fading, the exhibit offers visitors a chance to revel in a world less seen while they learn about ongoing research at the Donnelly Centre.

“As scientists it’s our job to make sense of data patterns and of what we capture under the microscope, and it’s easy to overlook the sheer beauty of biology,” says University Professor Brenda Andrews, who was founding director of the centre and commissioned the exhibit.

“We wanted to share this beauty with the public and to use the artwork to tell stories about some of the discoveries that have made the centre globally known as a leading hub for research in biomedicine.”

The exhibition was intended to mark the 15th anniversary of the Donnelly Centre in 2019, but its realization got delayed due to the coronavirus pandemic.

Founded in 2004, the centre brought under one roof researchers from across scientific disciplines to harness genomic technology for the advancement of science, medicine and health. During this time, the centre’s investigators carried out landmark studies that have transformed our understanding of cellular function and how it is linked to disease.

Andrews helmed the centre from its founding through three consecutive terms before stepping down in 2020 after completing her final term. Public outreach also blossomed under her leadership, with multiple initiatives aimed at instilling curiosity and the love of science among Canadians of all ages, especially schoolchildren.

For Ronit Wilk, the scientist and artist who created the piece, the exhibit is a dream come true. Wilk, who was previously a research associate in the centre and performed a lot of microscopy, always wanted to bring the “magical world” of cells to a wider audience.

“It’s a real privilege that we have as scientists to look into this world that’s invisible to most people,” said Wilk, who obtained her PhD at U of T in the lab of Professor Howard Lipshitz at the department of molecular genetics, followed by a post-doctoral stint at the Hospital for Sick Children before joining the centre in 2009.

“You transform into this tiny being looking around a cell that is colour-coded for you,” she said, referring to fluorescent markers scientists use to label different structures inside cells.

To prepare the exhibit, Wilk solicited scientific images from all 30 Donnelly Centre labs. She then selected the final 10 based on their theme, colour and composition to create a collage that captures the diverse research landscape in the centre. Wilk also artistically rendered each image using image-processing software before printing.

One panel in particular holds special value for Wilk. It shows exquisite patterns of RNA localization in fruit fly embryos, which Wilk herself took when she worked in Professor Henry Krause’s lab in the centre. The lab was the first to show that the majority of genes’ messages, transcribed into intermediate RNA molecules, show specific and dynamic localization within the embryo – and even inside individual cells – which helps ensure that the encoded proteins are made at the right place and time.

Although Wilk has moved on from the lab, she remains a staunch supporter of science by donating 10 per cent of her artist fee to foundational research.

“Basic research gets overlooked and usually there’s excitement about discoveries that can be applied right away,” said Wilk.

“But people don’t realize that by studying, for example, how RNA works, what is controlling it – those types of questions can lead to amazing discoveries later on, like we’ve seen with the first RNA-based vaccines in this pandemic.”