U of T alumnus Ian Williams on poetry, teaching and his Giller Prize-winning novel 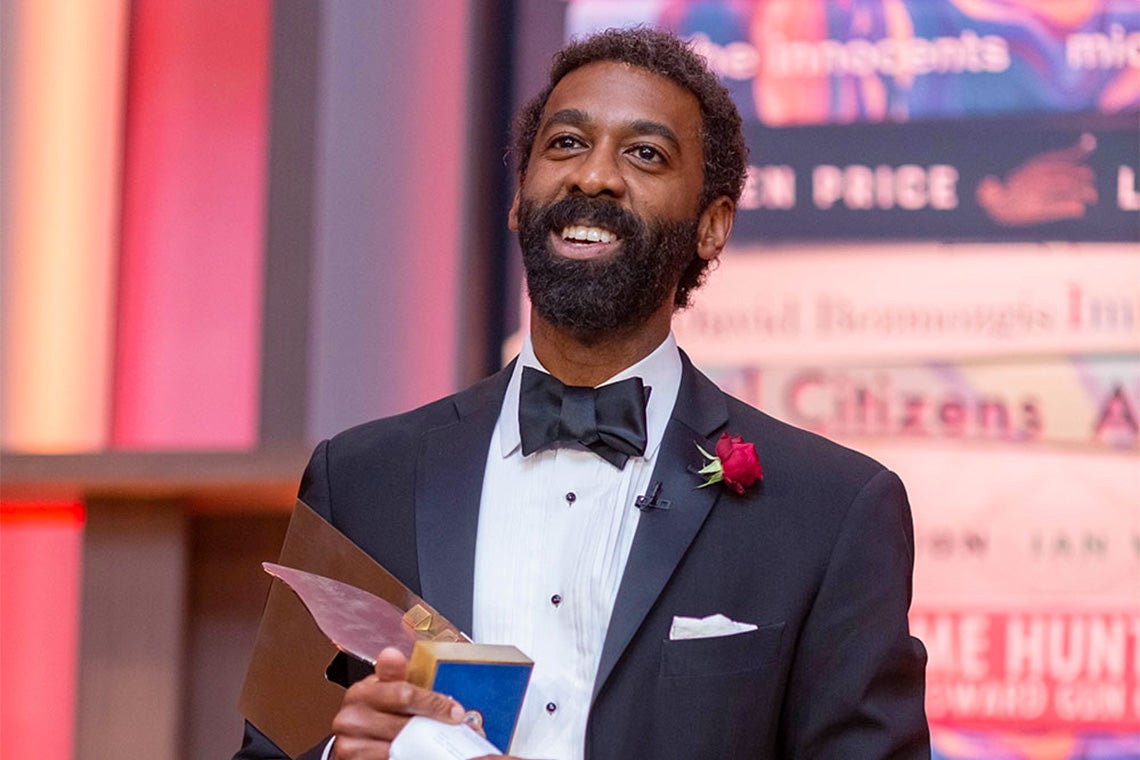 When Ian Williams learned his debut novel Reproduction had been shortlisted for the Scotiabank Giller Prize, he says it felt like multiple rows had lined up in Tetris.

“It starts pinging and flashing,” he says. “It felt like everything had clicked – slightly surreal, slightly by chance and slightly by skill.”

Whatever it was, it worked. On Monday, Williams was named the winner of the Giller, considered Canada’s top literary award for works of fiction.

The jury described Reproduction, Williams’s fourth book and first novel, as many things at once: “It’s an engrossing story of disparate people brought together and also a masterful unfolding of unexpected connections and collisions between and across lives otherwise separated by race, class, gender and geography.”

Elana Rabinovitch, executive director of the Scotiabank Giller Prize, says Reproduction “resonated deeply with the jury, evoking time, place and character that only the best works of art can achieve.”

Williams, a three-time graduate of U of T’s Faculty of Arts & Science, initially planned to be a doctor. His first-year undergraduate schedule was full of science courses – and one English course. Professor Julia Reibetanz taught the introduction to poetry class and had such an impact on Williams that he switched to a double major in psychology and English after his first year.

“Ian was a joy to have in the class because he always responded so genuinely to the poetry we were reading,” says Reibetanz. “I tried to show my students that reading poetry is – must be – a very personal act if it is to be meaningful. The classes where students were willing to take risks with their readings were quite wonderful. And Ian was one of the students who made that happen. He was the kind of student who makes a class come alive.”

Williams went on to obtain his master’s degree from the department of English, followed by his doctoral degree under the supervision of Professor George Elliott Clarke.

“It was a pleasure to work with him as a student, and now to watch his work become de rigueur for anyone who wishes to engage with the best of contemporary, African-Canadian letters,” says Clarke.

“In my undergrad English classes, Professor Reibetanz would be talking about Blake and in the margins, I would be scribbling a little poem to Blake,” Williams recalls. “I always was responding to the canon as a creator, not just an interpreter, so I’ve always wanted to have a poetic interaction with them rather than an analytical one.”

Now an assistant professor of poetry at the University of British Columbia, Williams teaches students ways to interact with poetry beyond analysis. “It's not something that needs to be fixed or even understood or analyzed. I try to reconnect them to art and literature as pleasure.”

One of Williams’s strategies is asking students to choose a poem and carry it around with them for a week. “You read it every day, and every time something occurs to you about the poem, you jot it down. You just live with it and slowly it starts to unfold beside you; as you learn more about yourself in the world, you learn more about the poem, too.”

The result? Students reported understanding the poem better, even memorizing it, says Williams. Some shared it with their friends while others found themselves reaching for it instead of their phones. “There’s this friendship that they form with the poem, which is just such a beautiful thing.”

Williams moved from poetry to prose with Reproduction. “It taxes different kinds of creative muscles compared to poetry,” he explains. He describes the ability to switch between the two genres as a form of bilingualism. “Bilingual people might sometimes dream in English or they might have certain relationships in French, and I feel that way about genres. I feel comfortable enough in each of them that I can respond to them when they call me.”

His last book, a poetry collection called Personals, was shortlisted for the Griffin Poetry Prize, and his short story collection, Not Anyone’s Anything, won the Danuta Gleed Literary Award for the best first collection of short fiction in Canada. His first book of poetry, You Know Who You Are, was a finalist for the ReLit Award for poetry.

Each book corresponds to a different stage in life and relates to the progression of identity over time, according to Williams.

“The first one dealt with identity and becoming yourself,” he explains. “The second one was a kind of repudiation of those things. My last book was about partnerships, about dating and romance and finding love.”

Reproduction, he says, marks the next stage: starting a family. “The next intellectual and personal progression was towards families and how they're formed. I think that men think a lot about children even though we don't often express that. And so, as a mid-30s man, I was thinking, ‘Where do babies come from?’”

“It’s a very complex book structurally,” says Williams, “and then there’s this other part of it that's just a good book to pick up in an airport and read.”

So what follows Reproduction?

“Disappointment,” he laughs. “That feels like the big, middle-aged novel.”