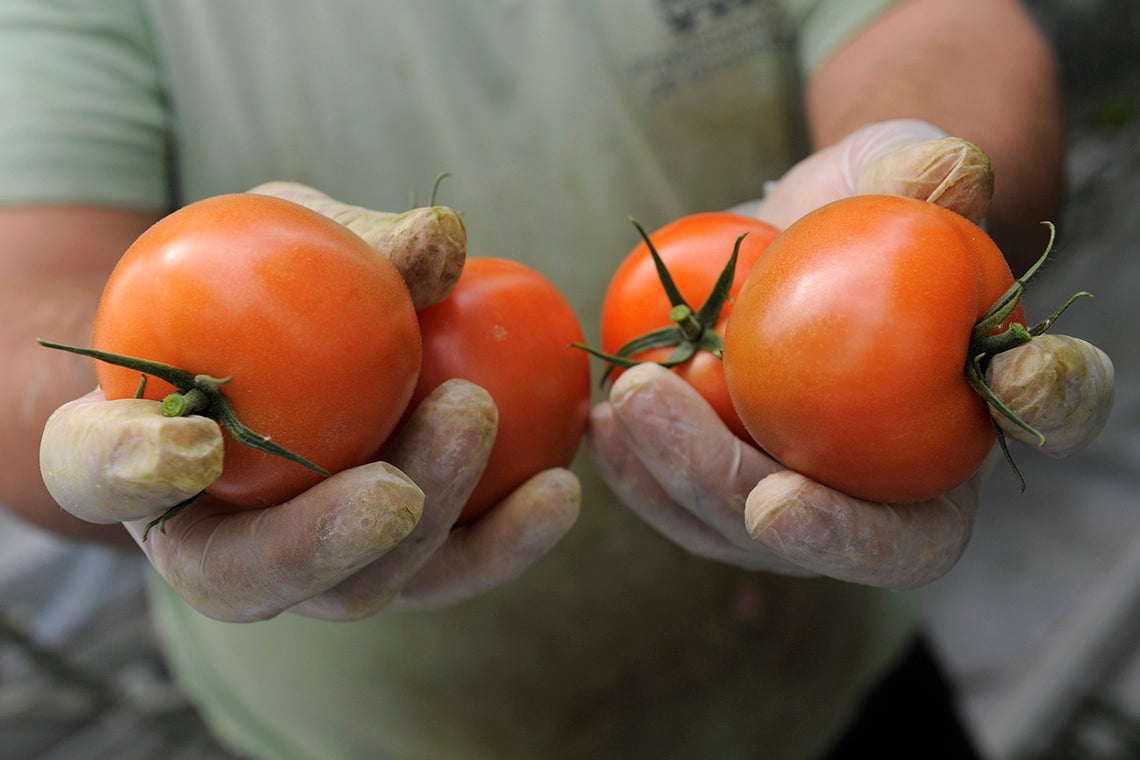 Tomatoes grown in a greenhouse: U of T researchers are looking to find genes in tomatoes, cucumbers and sweet peppers that give the plants broader resistance to disease (photo by John Thys/AFP/Getty Images)

Plant diseases are a major challenge for greenhouse growers, often responsible for up to 20 per cent in annual crop loss.

But a team of biologists at the University of Toronto is using advanced genomics to develop greater disease resistance in some common greenhouse vegetables. The project builds on research by Adam Mott, an assistant professor at U of T Scarborough, and Professors David Guttman and Darrell Desveaux from the department of cell and systems biology.

The project, led by Guttman and the Vineland Research and Innovation Centre, will receive $2 million to study broad range resistance – genes that can better protect vegetable crops against pathogens.

It is one of two projects involving U of T researchers that will receive nearly $2.8 million in funding from the Genomic Applications Partnership Program (GAPP), which is supported by Genome Canada, a not-for-profit funded by the federal government, as well as provincial governments and businesses.

The goal of the funding is to help connect researchers with companies to develop new gene-based technologies for sectors including health care, agriculture and environmental protection.

A second project led by Samira Mubareka, an assistant professor in the department of laboratory medicine and pathobiology, and Fusion Genomics Corp. will receive $781,000 to help develop monitoring technology for viruses like bird and swine flu.

"We are grateful for the support from GAPP for these innovative projects, which allow researchers to collaborate with industry and develop solutions using gene-based technologies that will benefit society and the economy,” said Vivek Goel, U of T’s vice-president of research and innovation.

The GAPP funding was announced Thursday by federal Science Minister Kirsty Duncan. “By investing in researchers, we are giving them the opportunity to work with each other and their counterparts in the business, health and agricultural sectors to find the ideas and innovations that power a stronger economy and a growing middle class,” she said. Federal Science Minister Kirsty Duncan (centre, in red jacket) at Thursday's announcement. U of T's Adam Mott is in back, right (photo by Julie Jocsak/CP Images)

Mott said previous research by the biologists discovered an uncharacterized family of genes that can give plants broader resistance to diseases when they are removed from the plant.

“We found these genes in an experimental plant called Arabidopsis, but we want to be able to find the corresponding genes in tomatoes, cucumbers and sweet peppers,” Mott said.

He added that Vineland has a massive collection of seeds from these crops, created through a process known as chemical mutagenesis — meaning they are not genetically modified organisms (GMOs). The ultimate goal of the GAPP project is to develop new varieties of plants that will benefit Canada’s greenhouse vegetable industry, responsible for more than $1 billion in annual sales and exports.

Mubareka, meanwhile, is teaming up with Canadian company Fusion Genomics to help develop a tool for government agencies and institutes responsible for monitoring the emergence and spread of viruses.

“It’s really difficult to tell when a virus risks becoming an epidemic,” says Mubareka, an expert on infectious diseases. Her research at the Sunnybrook Research Institute focuses mainly on the transmission of the influenza virus, commonly known as the flu.

The technology, which promises to be highly sensitive and scalable, will use advanced genetic sequencing techniques to predict disease outbreaks more efficiently and can help with timely vaccine design and production.