Students, staff and faculty invited to give their input on future of campus mental health services 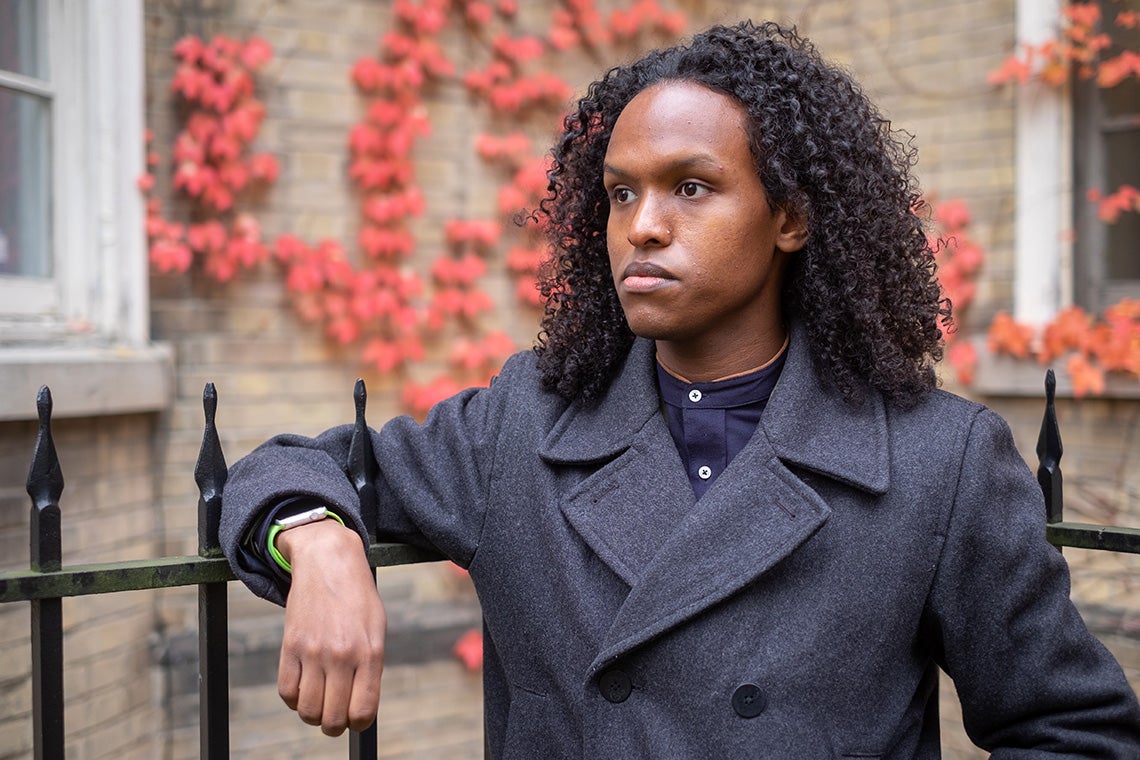 “My mental health challenges became debilitating during what should have been the best time of my life,” says Egag Egag, a student member of the task force on student mental health. “I’m in a much better place now” (photo by Geoffrey Vendeville)

Egag Egag’s first years of university didn’t pan out the way he expected.

He moved to Ottawa from Toronto to study philosophy and sociology, hoping he would also make new friendships that would last a lifetime. But in an unfamiliar city 400 kilometres away from home, he found it difficult to meet new people.

“People were living their lives, partying and demonstrating how great their lives were on Facebook,” he recalls. “I was receptive to that in a way that made me feel really left out.”

There was also the added pressure of being a first-generation student who was trying to make his family proud. He felt he couldn't relate to other students and experienced panic attacks throughout his undergraduate years.

He came back to Toronto and transferred to the University of Toronto Mississauga, where he saw a counsellor in his final year before graduating in sociology with high distinction. He landed a job soon after, but that's when his mental health challenges peaked.

“My mental health challenges became debilitating during what should have been the best time of my life,” Egag says.

But he found help. He saw a therapist, who continued his counselling, and a family doctor, who prescribed medication for obsessive-compulsive disorder and depression.

“I’m in a much better place now,” he says. “I was very fortunate to have had very supportive people … but I know that’s not always the case for everyone else around my age.”

Egag is now pursuing a master’s degree in social work at U of T and working as a student counsellor at Family Services Toronto, a career track influenced by his lived experience of mental health challenges. At the same time, he is helping shape the future of mental health services on campus by lending his time and insights to the Presidential & Provostial Task Force on Student Mental Health. The group, composed of students, faculty and staff, is reviewing mental health supports across the university and has already conducted a lengthy consultation process on all three campuses.

Now, the task force is seeking students’ feedback on the broad themes that emerged from the consultations. From Monday to Friday this week, students, staff and faculty can weigh in on the draft summary of themes during student-run feedback sessions on the three campuses that have been organized by the Innovation Hub. No registration is required for the “pop-up” events, which are being held in high-traffic spaces.

Members of the U of T community can also provide their input through an online form until Nov. 25 or by emailing studentmentalhealth@utoronto.ca.

Sandy Welsh, U of T’s vice-provost, students, serves as senior assessor of the task force.

“We want to make sure that we are heading in the right direction,” she says, “and so we want to check in with people before we start finalizing any recommendations on these very important issues.”

The themes identified by the task force include questions around the availability of mental health services and how those services are communicated to the university community. Some students, for example, expressed concern about waitlists for counselling appointments and the number of available spots. The task force also identified a need to make pathways to mental health supports more transparent and accessible.

As for communication, the task force found that there is misunderstanding about the university’s mandated leave of absence policy. The measure – to be used only in exceptional circumstances – was intended to provide the university with a way of helping students who display concerning behaviour that suggests extreme mental health challenges or serious health issues.

“The policy is helping the very small number of students it was designed to help in terms of providing a compassionate and supportive way for them to take a break and come back,” Welsh says.

On the broader topic of demand for mental health services on campus, Welsh says U of T isn’t the only post-secondary institution that is working hard to meet students’ increased and changing needs.

“All universities in Ontario, Canada – even North America – are in the same position,” she says. “We are acutely aware of the need for mental health services, but as an educational institution we know we can’t deliver these services alone.

“We need engagement with other community partners and levels of government.”

Last month, U of T President Meric Gertler made many of the same points in a letter supporting a Toronto city council motion asking the federal government for funds to bolster local mental health supports.

“The magnitude of these problems requires multiple partners working together so that solutions can be found,” President Gertler wrote.

While it can be difficult to talk about one's mental health challenges, Egag says it's vital for the community to participate in consultations so that students receive the support they need.

"I'm of the opinion that those of us living with mental health challenges have our own unique stories,” he says. “[But] they may sometimes feel very hard to articulate and share with others – unfortunately leaving us to feel that we have to suffer in silence.

“If I could talk to myself at the start of my undergraduate studies, I would have told myself that I am deserving of feeling at peace – just as I think every student is.”

In the eight years since he started university, Egag says there's been a noticeable change in the conversation around mental health and he hopes things continue to change for the better.

“For any student reading this, I want them to know that getting into the University of Toronto is an incredible accomplishment, and they are deserving of support when needed,” he says.

And if you see him around campus, Egag says don't hesitate to stop and say, “Hello.”

“You are more than welcome to tell me if you're having a bad day,” he says.