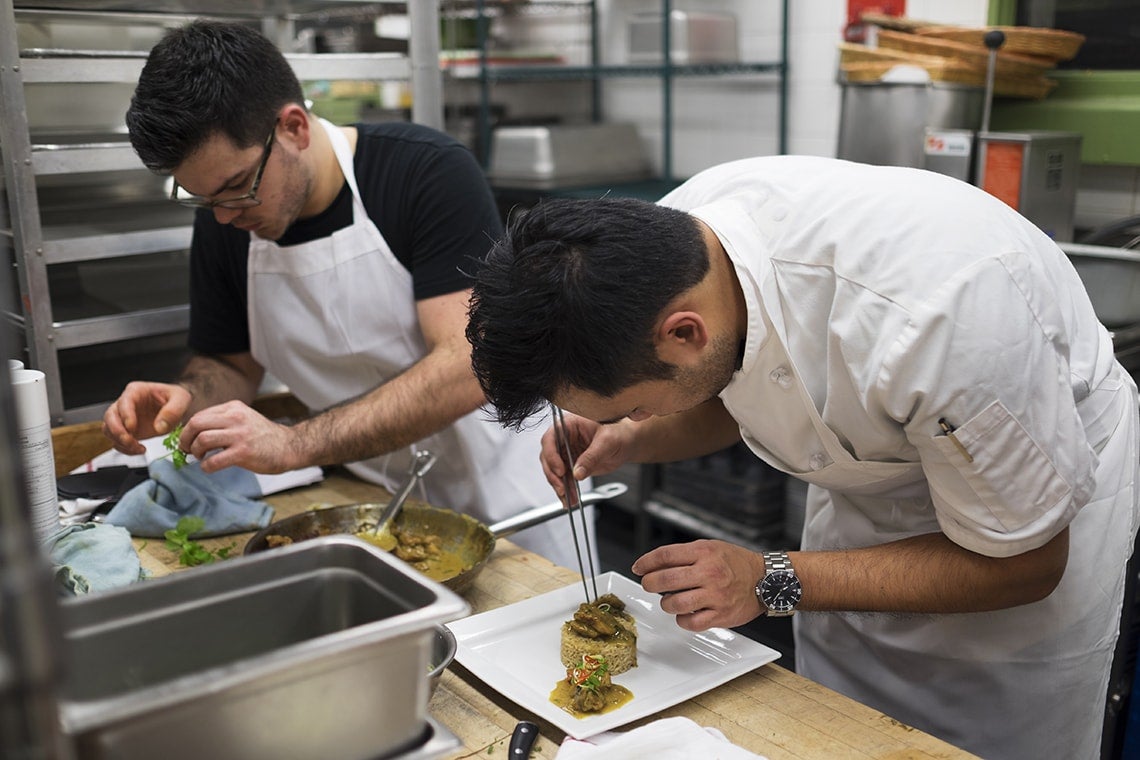 They will face McGill, OttawaU, Yale and the University of Massachusetts-Amherst in an inter-university culinary showdown hosted by U of T in February

Four student chefs have been chosen to bring the University of Toronto glory next month when the university hosts the annual Iron Chef challenge.

Brettany Colette, Felipe Branco, Jordan Su and Ailin Xi made the cut after a culinary duel in the New College cafeteria kitchen on Tuesday evening.

After receiving dozens of applications to represent U of T at the competition, U of T chefs Jaco Lokker and James Piggott invited 12 students to demonstrate their skills in a faceoff. The students were split into teams of three and given two hours, a whole chicken and the run of the New College kitchen to prepare a dish that would leave the judges licking their lips.

Here’s how the night went down:

Piggott, the executive chef residential dining at New College, greeted the students in the cafeteria and made it clear that as hosts of this year’s contest, the stakes are especially high.

“We are hopefully going to have eight or nine competitors,” he said, “and we’re going to crush them. This is our home. This is our turf. We don’t lose at home." 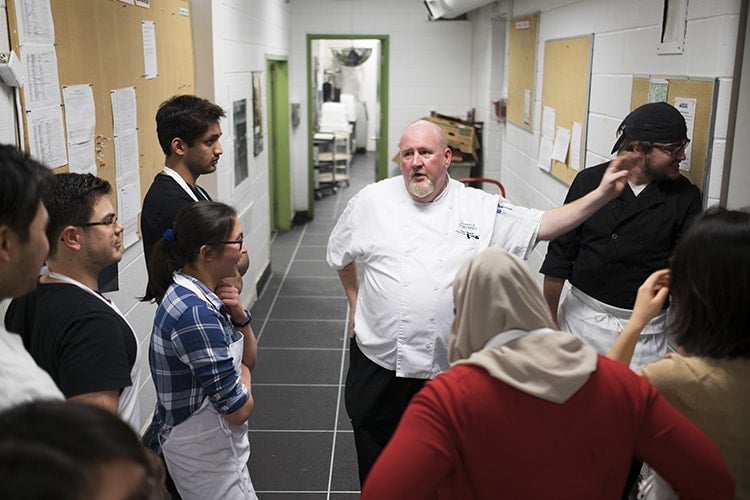 Su, a fourth-year human geography major, wouldn’t have made it to the trial if it wasn’t for a friend who sent him the Iron Chef application the night before deadline.

He needed to submit a photo of a dish for the application but had nothing in the fridge.

“I was so stressed that night. I couldn’t sleep,” he said.

He woke up at six to get the ingredients from Loblaws for miso halibut and pan seared scallops with quinoa salad. He got everything done before going to work at nine.

As he sat in the New College dining room with the other finalists for the U of T team, he said he was a little nervous.

“At the same time, I’m excited because I’ve never cooked in a pro kitchen before so this will be a great experience,” he said.

The students were separated into teams and took their places at counters in the kitchen.

Lokker, U of T's director of culinary operations and executive chef, introduced himself to the finalists.

He has coached the U of T team in each of the last three years at Iron Chef but stepped aside this time to host the event.

Piggott takes over as head coach although Lokker will help prepare the student chefs for the big event. 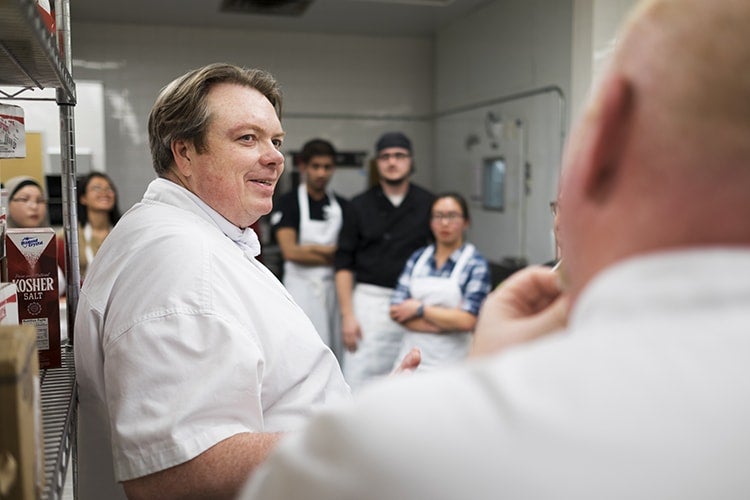 Before the students at the trial could make a dash for ingredients, Piggott went over the ground rules:

“No swearing. This is not Hell’s Kitchen,” he said.

The contenders were allowed one f-bomb if they cut themselves – and even then, “It better be worth stitches,” he said.

At just after six, it was go time.

The teams wasted no time planning their dishes: a classic coconut curry with blend of fresh herbs and fresh chicken stock; roasted chicken with butter and thyme accompanied by green pea puree with thyme, garlic herb oil and lemon juice; fried chicken on french toast with applesauce and whipped cream; and chicken stuffed with cheese and pine nuts on handmade fettuccine.

Branco, a first-year M.B.A. student at U of T’s Rotman School of Management, was in charge of carving the chicken for the curry.

He said he had some experience in that area after interning at a restaurant in Panzano, near Florence, Italy, where he learned how to make “old school” Italian dishes like bistecca fiorentina and Francesina stew (beef shank cooked in red wine, onions and tomato sauce). 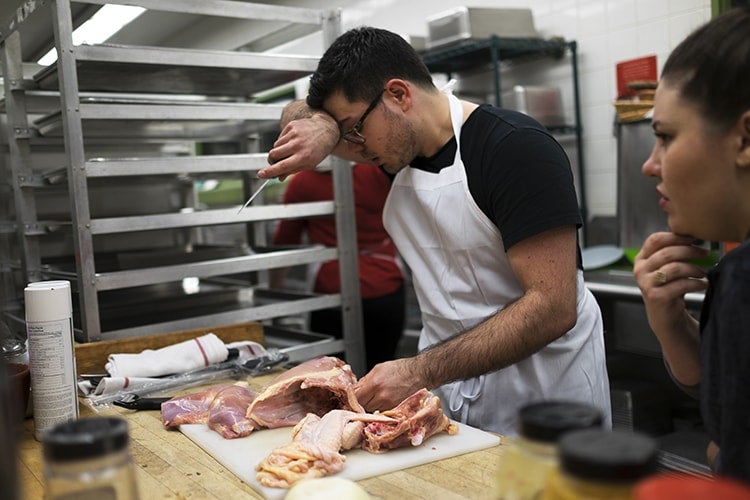 Felipe Branco, an M.B.A. student at Rotman, prepares a chicken for a curry while his team partner Brettany Colette looks on (photo by Geoffrey Vendeville)

As students picked up the pace to finish in time, the chefs strolled up and down the aisles appraising their skills.

They were evaluating whether students could hold a knife properly, cooking terminology the students were using and whether they stuck to simple ingredients or took risks. 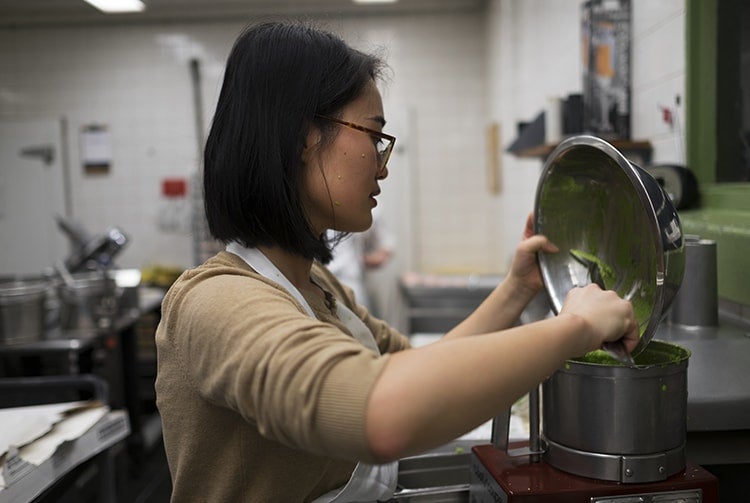 Ailin Xi, a biochemistry and nutrional sciences student, is splattered with green pea and pepper puree during the Iron Chef competition trial (photo by Geoffrey Vendeville)

The judges also considered how well the students gelled together.

“You’re always going to have people who stand out more as leaders,” Lokker told U of T News. “And you don’t need three of those on the same team. That’s a huge problem.”

By this point, some teams were getting ready to plate their dishes while others had yet to put their food in the oven.

With 15 minutes to go, the chefs left the kitchen to give the teams some breathing room.

Branco, Su and their teammate Colette prepared to lay out the chicken curry, thinking carefully about the position of each element of their plate and what one student called the “sauce-to-rice ratio.”

They chose only the prettiest pieces of chicken for the dish and garnished them with tweezers.

Another team raised fried chicken on french toast to a new level of elegance. 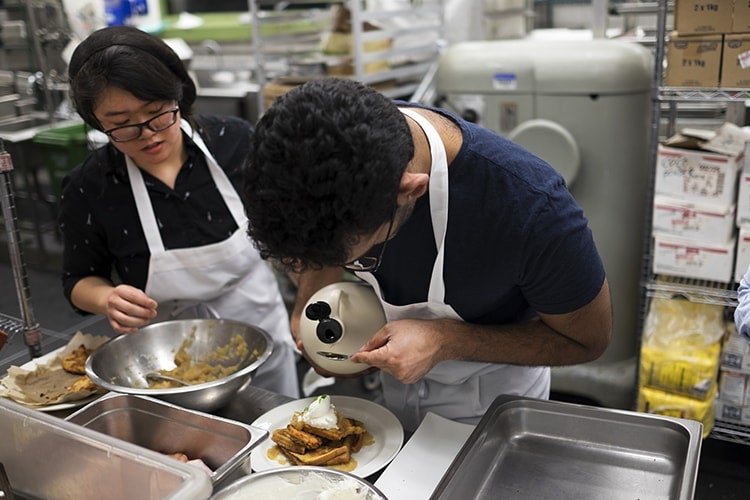 U of T students vying for spots on the university's Iron Chef team put the finishing touches on fried chicken, french toast, applesauce and whipped cream (photo by Geoffrey Vendeville)

One by one, the teams brought their creations out to the cafeteria where chefs Lokker and Piggott were waiting.

Lokker seemed impressed with another team's fettucini made from scratch.

“This is exactly the way fresh pasta should taste,” he told them.

The chefs conferred while the students cleaned up their stations. “It’s getting harder now,” Lokker said to his colleague as they deliberated. 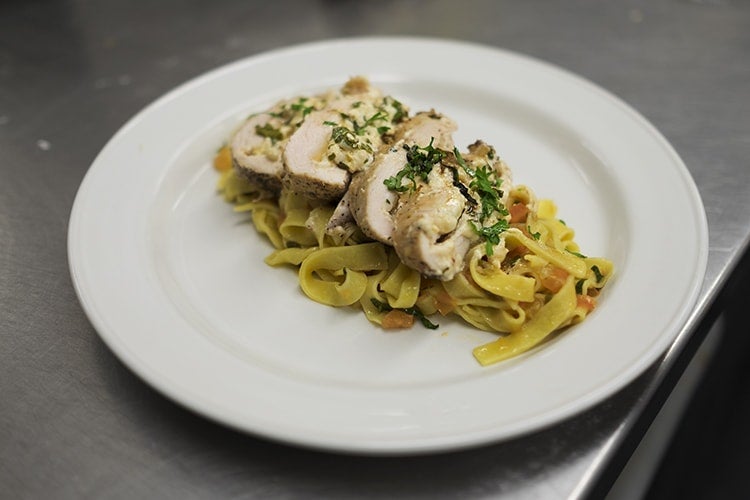 Stuffed chicken with fettuccine. The chefs behind this dish didn't make the cut for the U of T Iron Chef team this year (photo by Geoffrey Vendeville)

A few minutes after sampling the last dish, the chefs called the students back out to the New College cafeteria dining room.

When Piggott announced the winners – the makers of the coconut curry – Colette sprung up from her chair and high-fived her teammates. 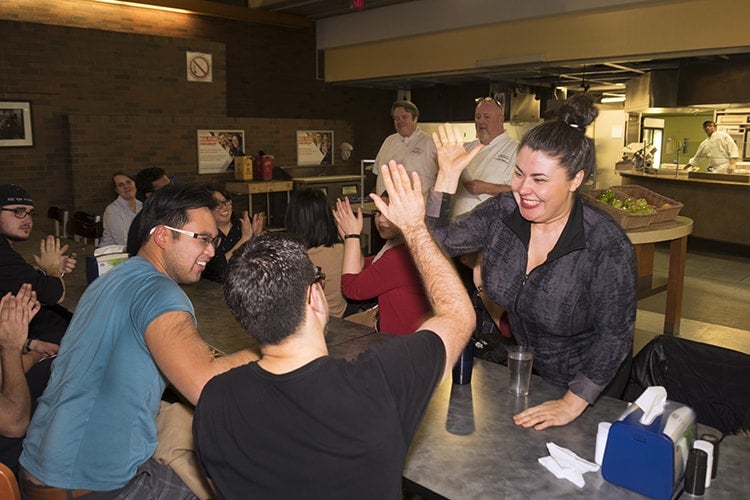 With the air of an athlete who had just progressed to the playoffs, Su, the human geography student, said he was happy to have made it this far but refrained from gloating.

“My main purpose here was just to have fun,” he said.

The students who hadn’t made the roster smiled and applauded.

“It was so much fun. They provided us the whole kitchen, which was amazing,” said Burce Isik, who studies genetics, biotechnology, and molecular biology. “I’m in fourth year. If I’d known about this before, I would’ve applied in my second year, third year.”

Three of the four winning students will compete at the Iron Chef cook-off the weekend of Feb. 25th. The fourth student is an understudy but guaranteed a spot on next year’s team. The backup will be decided at the team’s first practice session with their coach, Piggott. 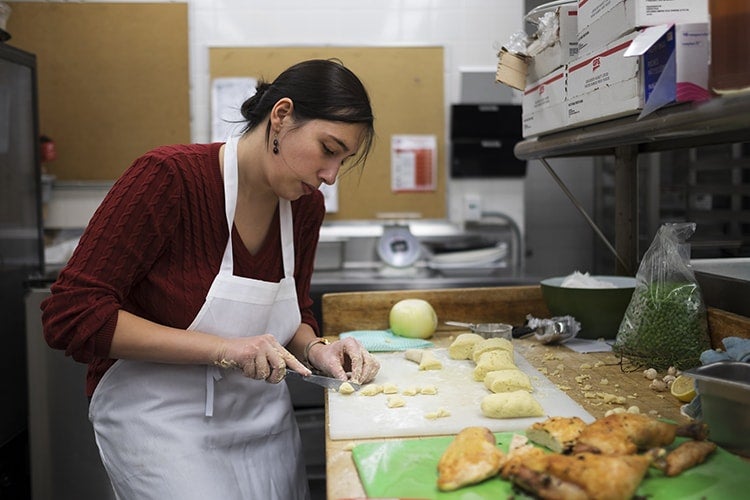 Read more about the competition