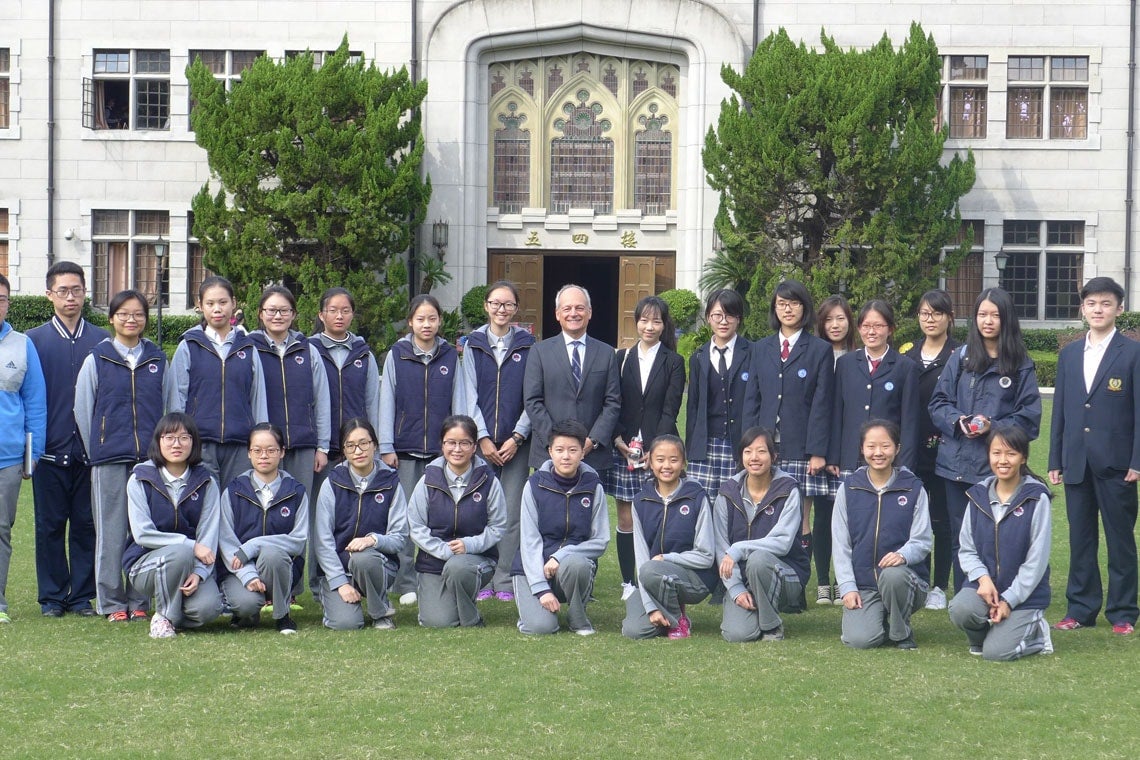 U of T President Meric Gertler with applicants for the U of T Scarborough Green Path program from Shanghai No.3 Girls’ High School (photo by Vinitha Gengatharan)

Urban centres such as Shanghai and Toronto are vital contributors to local and national prosperity, University of Toronto President Meric Gertler told a forum on innovation, creativity and urban regions in the populous Chinese city earlier this week.

In his latest trip to China, President Gertler has spoken at conferences in Shanghai and Beijing, visited alumni and prospective students, talked with Canadian embassy officials and met with Chinese university colleagues.

At the Shanghai forum, he was a keynote speaker.

Urban regions, he told the audience, “are recognized as sources of creativity and innovation, drivers of economic growth and resiliency.”

With a population of 24 million, Shanghai “exemplifies this better than perhaps anywhere on the globe," Gertler said.

Universities such as the University of Toronto and Shanghai Jiao Tong play an important role in this process, he said, noting that they “excel at producing, attracting and retaining talent.”

The relationship is symbiotic, he explained. Urban regions foster the development of world-class research institutions and universities, while universities foster world-class cities.

It is important, he said, for cities like Shanghai and Toronto to invest in the infrastructure that will attract talented people and institutions.

“Extraordinary things can happen when sustained and wise investment over many years builds infrastructure, brings together extraordinary talent and fosters connections among different fields, industries and leading global regions.”

After attending the conference, President Gertler visited Shanghai No.3 Girls’ High School, one of U of T’s Green Path affiliate schools.

Under the Green Path program, U of T Scarborough has established a partnership with 21 of the top high schools in China. Green Path is a 12-week summer preparatory program that invites top high school students from China to build their academic skills while adapting to life in Canada. Once students successfully complete the program, they go directly into first-year undergraduate studies at U of T.

Ted Sargent, U of T's vice-president international, accompanied President Gertler for part of the trip, reflecting the importance that U of T places on the region.

Ontario Institute for Studies in Education Dean Glen Jones was also in China this past week. Jones was part of an international panel, conducting a review of Sun Yat-sen University (also known as Zhongshan University) for China’s Ministry of Education. He also met with education partners at Zhejiang Normal University in Hangzhou, visited with alumni and spoke at a forum on world-class universities.

During his visit, President Gertler also took time out to photobomb a Shanghai wedding, go sightseeing and enjoy some of the local cuisine.

PhD student Asif Farooq, the founding managing editor of U of T's China Open Research Network, had some sightseeing suggestions for President Gertler in Beijing.

“Given that the President has a background in geography, I think he would like to visit Beijing's hutongs [narrow alleys which are home to many old, traditional courtyard residences]. Hutongs have been restored as tourist attractions,” Farooq told U of T News writer Andrew Zhao.

“Walking through the alleys can give him a glimpse of the old Beijing, and discovering restaurants tucked inside those alley corners could be a fun experience. He could find some of the pubs inside hutongs fascinating given most have a courtyard with ancient rooftops. Figuring out the past dynasties’ influence on those rooftop architectures could be a pleasant endeavour for any curious mind.”