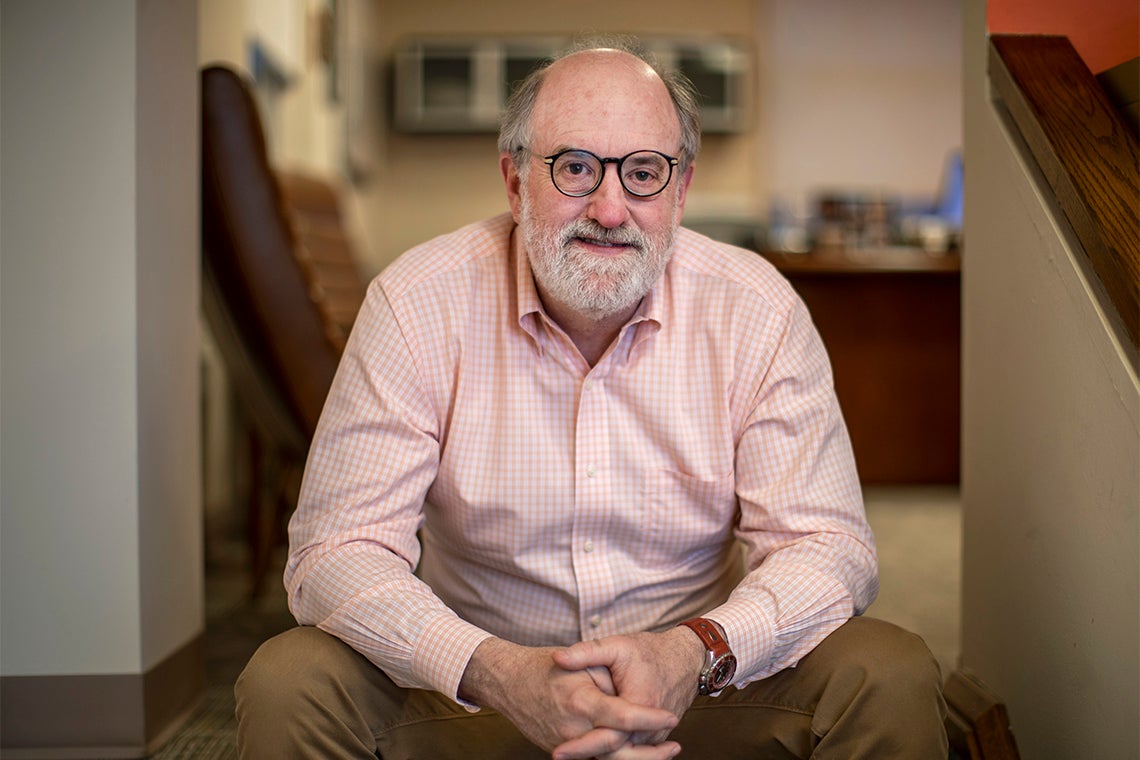 Scott Mabury, U of T’s vice-president, operations and real estate partnerships, appeared at a virtual event in advance of COP26 where he described U of T’s plan to go beyond net-zero greenhouse gas emissions (photo by Nick Iwanyshyn)

University of Toronto research in clean-tech and renewable energy will help organizations in the Toronto region and across Canada achieve net-zero emissions – while generating thousands of new jobs, says Scott Mabury, U of T’s vice-president, operations and real estate partnerships.

At the same time, U of T’s own ambitious carbon-reduction plan will serve as a model for other universities and institutions, Mabury told members of the Toronto Region Board of Trade during a panel discussion last week.

The event – which occurred prior to U of T’s Oct. 27 announcement that the University of Toronto Asset Management Corporation would divest directly held fossil fuel investments within 12 months and all indirect fossil fuel investments no later than 2030 – was held in advance of the international conference on climate change in Glasgow.

The hour-long “Power Breakfast” virtual event featured Mabury, Catherine McKenna, a U of T alumna who has served as the federal minister of the environment and minister infrastructure and communities, and Ken Hartwick, president and CEO of Ontario Power Generation.

Despite the immense challenges every country faces to lower emissions, McKenna described the transition to green energy as a huge economic opportunity for Canada that will require a domestic commitment to innovation in low-carbon technology.

“It’s about whether Canada will be competitive,” she said. “We either go all in … or we will lose, and that means our economy will suffer.”

Mabury noted that U of T’s own research programs into green tech and renewable energy have attracted almost half a billion dollars in funding, in areas such as energy storage, energy transmission and decarbonization. What’s more, clean-tech startups founded at the university have raised almost $300 million over the past decade.

He described U of T’s own plan to go beyond net-zero greenhouse gas emissions. The plan sets out how and when the university will achieve most of its reductions, as well as how it will fund each step of the $1.3-billion initiative. "We hope to serve as the model for other institutions – not simply by making a pledge but by delivering an auditable plan for how we’re going to get there.”

McKenna said U of T deserved kudos for its efforts. “These are great initiatives. I think it’s important that government help support them.”

Hartwick agreed: “This is what we need from every company and institution. And, as Scott said, these [plans] need to be auditable.”

Mabury acknowledged the university’s goals won’t be easy to achieve. The downtown Toronto campus is home to some of the oldest university buildings in the country, which will have to be retrofitted – and the emissions reductions are occurring in the context of a growing campus. Building square footage at St. George is expected to double over the next 30 years. Funding is also a challenge: U of T has a deferred maintenance backlog of $800 million and limited government support to address it.

Additional government investment is also needed to support laboratories and other infrastructure needed to develop and keep green innovations in Canada, Mabury said. “Canada is a very inventive country. But we’re not great yet at turning those inventions into value for the country.” He added that there is so little laboratory space available in Toronto for entrepreneurial scientists that many are leaving for the U.S. “We have to deliver more infrastructure so inventions can grow and prosper in Canada.”

The university will seek out partnerships to help fill the gaps and plans to harness the ingenuity of its faculty and students, Mabury said. He noted that, every year, some 5,000 students are engaged in sustainability projects across the three campuses – and highlighted one high-profile example. CERT Systems, a company founded by U of T engineering students and faculty, has developed a system to convert carbon dioxide before it enters the atmosphere into carbon-based fuels. The company was recently a finalist in the $10-million Carbon XPrize and has now installed its system on U of T’s St. George campus.

Although Mabury expects more countries to unite behind the need for urgent climate action at the COP26 summit, he places much of his own hope for the future with youth and education. “It’s our students who I believe will deliver the solutions.”