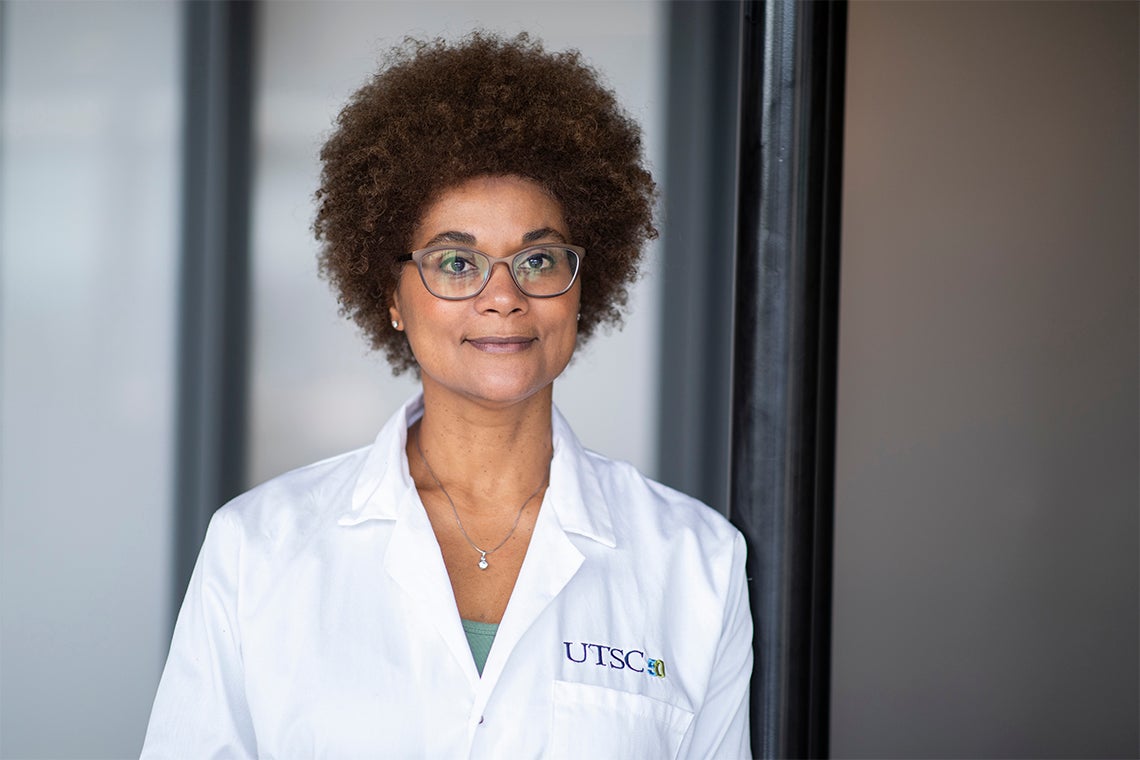 Maydianne Andrade, a professor at U of T Scarborough, is one of several leading researchers at universities across Canada who came together last summer to form the STEM-focused Canadian Black Scientists Network (photo by Nick Iwanyshyn)

For years, the University of Toronto’s Maydianne Andrade shied away from the idea of being a role model.

The professor of evolutionary biology at U of T Scarborough considers herself a “typical scientist” – one who is not particularly social, head down and immersed in her work. In fact, Andrade says she paid little attention to the issue of Black representation in academia despite a career riddled with moments where she was the sole Black person in a seminar or research lab.

Her outlook changed gradually over time, but really crystallized after attending U of T’s first student-run Black Graduation celebration in 2017. That’s when a Black neuroscience major approached Andrade in tears.

“She said she had never seen a Black professor or teacher before, and that seeing me at U of T Scarborough, despite her experiences in first-year, was one of the reasons she stayed in the program,” says Andrade, who is a Canada Research Chair in Integrative Behavioural Ecology and leads a lab that studies the mating behaviours of spiders.

“She said she always felt like she stood out, like she was ‘other’ – like she just didn’t belong there. She told me that she had wanted to talk to me for four years.

“You kind of have to accept that representation is important when you hear something like that.”

The network is currently planning the first annual national conference for Black Excellence in STEM & Medicine (BE-STEMM), to be hosted virtually at U of T this November. The network is applying for grants and partnerships through Canada’s federal research funding agencies to fund the conference and the organization’s continued growth.

The Canadian Black Scientists Network is also developing a partnership with Statistics Canada to compile and analyze data on the proportion of Black students in STEM at every stage of education, from high school onwards.

Andrade says taking a data-based approach is one way to refute scepticism surrounding the existence of racial discrimination within educational institutions.

“We are academics and we want to evaluate the evidence,” she says. “Really until last year, I would say most of our colleagues didn’t believe us. The George Floyd reckoning changed what people are willing to hear and believe to be true.”

Some studies have already been done on the issue. A 2017 York University study, for instance, found that Black secondary school students within the Toronto District School Board were discouraged from taking the most academically rigorous courses. And since most university STEM programs require the completion of certain high school courses, students in “applied” streams are often not eligible for these programs.

The conference will include a summit on how to share insights with Black youth and support the flow of Black youth into STEM fields. The network is also developing a mentorship program for young people at the start of their academic careers.

In Andrade’s case, she says she always loved science and was particularly fascinated by biology and the notion of underlying structures and rules that could help us understand the world. She also credits the influence of a professor who taught an introduction to biology class she took as an undergraduate. At the time, she was planning on going to medical school.

The professor got her hooked on the idea of doing research and teaching subjects herself.

“About six months into that first-year course, I suddenly realized I could do what my professor was doing,” Andrade says. “It was an ‘aha’ moment that I still remember. Hairs on the back of my neck stood up, butterflies of excitement in my stomach.” 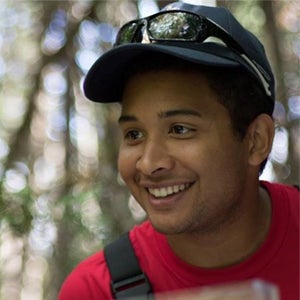 Paul Bzonek, a PhD candidate in U of T’s department of ecology and evolutionary biology in the Faculty of Arts & Science, says he got involved with the Canadian Black Scientists Network in part because he wants to support future generations of Black STEM students in their endeavours.

Growing up on farmlands outside of Guelph, Ont., Bzonek was surrounded by nature and became fascinated with wildlife. As a child, he roamed the forests behind his house, picking up toads and then letting them hop away so he could see where they went.

His mother, a psychiatrist affiliated with McMaster University, introduced Bzonek to the world of science and academia at an early age.

“I have benefited from a lot of exposure that many others in the community haven’t had,” Bzonek says.

“Seeing that my mom was in an academic institution was certainly important. I want to provide that same privilege to others in the community – to let them know that a position in STEM is available to them.”

Bzonek says he is excited by the network’s potential to address some of the most pressing issues facing Black STEM practitioners, including the “leaky pipeline” that pushes Black students out of science fields from as early as high school, resulting in their under-representation.

“Having a system that filters out strong Black aspiring scientists is a detriment to the entire institution and the entire country,” says Bzonek, who serves as the Canadian Black Scientists Network’s trainee lead.

“More than once, Black students have told me that it’s pretty cool to have a Black teaching assistant. Representation matters.” 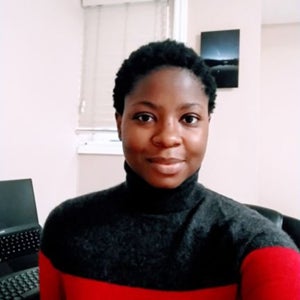 Alero Jennifer Gure, a post-doctoral researcher in the department of Earth sciences in the Faculty of Arts & Science, says she found a supportive community through the Canadian Black Scientists Network when she moved to Toronto in the midst of the pandemic.

She completed her PhD at the University of Wyoming in Laramie, a small city nestled in the Rocky Mountains. The Nigerian-born scientist says she had become accustomed to being the only Black person on Laramie’s streets, let alone in the classroom.

Gure says she was surprised to discover she was often still the only Black person in the room when she arrived in Toronto – a city that is orders of magnitude larger than Laramie and known for its diversity and multiculturalism. It didn’t reflect what she saw in the city’s streets or in her own neighbourhood, she says.

She was introduced to the Canadian Black Scientists Network by Nadège Compaoré, an incoming assistant professor of political science at U of T Mississauga.

“It was good for my mental health to know that there’s a community out there of people who are like me, who in many ways feel alienated,” says Gure, who is the network’s membership lead.

“It’s heartbreaking to know that a kid somewhere thinks, ‘I can’t do science or practise any STEM-related discipline because I am Black,’ considering the perceptions of people of different backgrounds can add depth and breadth to how we view life and how we proffer solutions to societal problems.

“Working with the Canadian Black Scientists Network gives me a chance to not only promote the accomplishments of other Black STEM practitioners across Canada, but also to motivate and inspire young teens who aspire to be scientists someday.”

Andrade says she hopes the upcoming conference will serve as a launch pad to make Canadian Black Scientists Network the go-to cross-disciplinary hub for Black scientists across Canada.

The group’s message has been steadily gaining momentum. One of its members – Jude Kong, an assistant professor in the department of mathematics and statistics at York University – recently mentioned the network in an interview with Nature, the scientific journal, and Andrade spoke about the network on a recent episode of CBC Radio’s Quirks & Quarks.

Non-Black allies and all scientists are invited to engage with the network and attend the conference. They are encouraged to educate themselves on the issue through resources available online. The group’s website has a page for allies who have affirmed their commitment to actively supporting, promoting and enabling structural change to ensure the development, recruitment and success of Black STEM researchers within their organizations. They include William Gough, U of T Scarborough’s vice-principal, academic and dean.

“When there are initiatives aimed at redressing these problems, people need to be vocal in their support,” Andrade says.

Andrade, who is also U of T Scarborough’s special adviser to the dean on inclusive recruitment and equity education, awaits the day that under-representation will no longer be a concern for Black scientists.

“I just wanted to be a scientist, but being Black followed me through that,” Andrade says. “Just because I’m a professor doesn’t mean that I’m not followed around in a drug store because people think that I’m going to put something in my backpack. And you can’t keep ignoring that.

“Decades of employment equity laws and decades of trying to apply equity in the school system hasn’t done it yet, so that’s why the Canadian Black Scientists’ Network is here.”