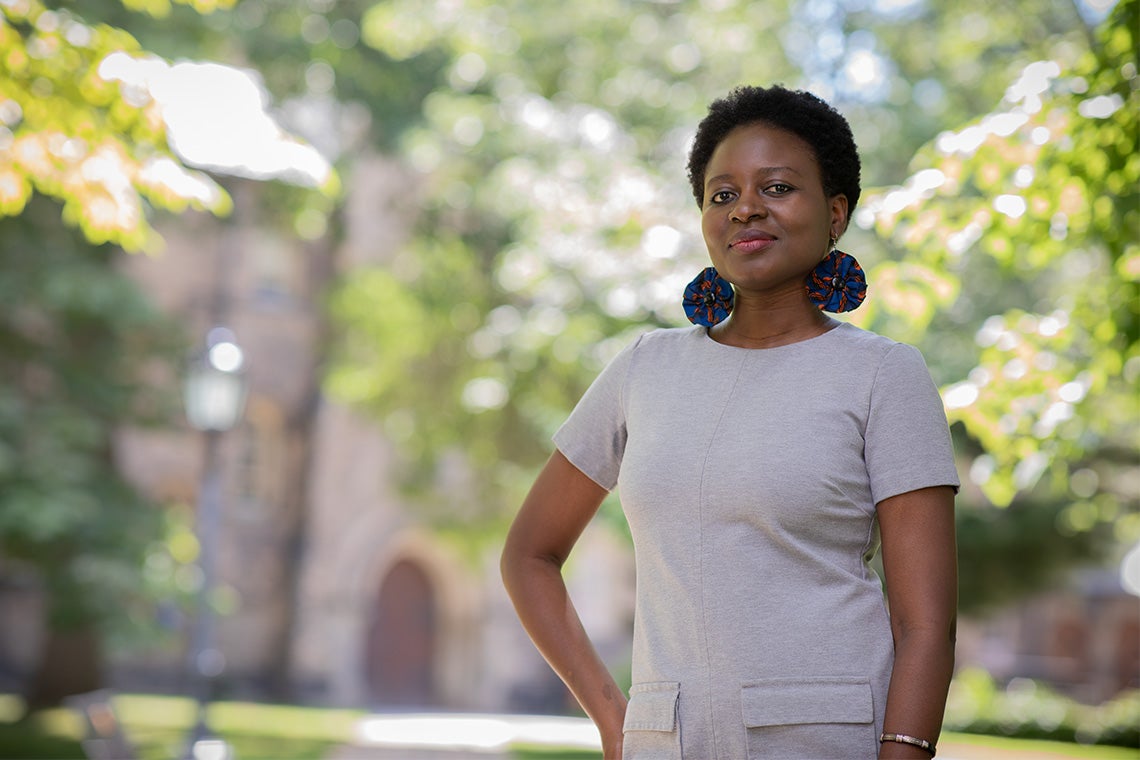 Next July, Nadège Compaoré will start as an assistant professor of political science at the University of Toronto Mississauga. She describes the position as her “dream job” – the culmination of an obstacle-filled academic journey that began 19 years ago when she arrived in Canada from Burkina Faso on a full scholarship.

Her first stop was the Lester B. Pearson United World College of the Pacific in Victoria, before heading east to earn an undergraduate degree at Trent University. She then pursued graduate work in political science at Queen’s University, where she was one of only a few Black students in her program. She came to U of T through a Provost’s Postdoctoral Fellowship, which is awarded annually to seven Black and Indigenous researchers who demonstrate excellence in scholarship and a willingness to “ask tough questions.”

Lisa Haley, the senior adviser and manager for program completion and postdoctoral services at U of T School of Graduate Studies, says the fellowship aims to develop and promote researchers who are underrepresented at U of T. Demand for the two-year postings, which are valued at $70,000 a year, has been strong. “We found there’s a big appetite out there for this kind of funding, and a lot of great scholarship waiting to be funded,” she said.

Compaoré began her U of T fellowship last July as a member of the first cohort. She spoke recently with U of T News about the opportunity and her research. She also talked candidly about the experience of being one of only a few Black graduate students in political science and the subtle and not-so-subtle instances of racism she has experienced throughout her academic career.

How would you describe your research to someone not in academia?

My research aims to uncover actors that are usually hidden, silenced or erased in international relations theory. In terms of my postdoc, I’m looking at how African states are often viewed as passive actors against powerful oil and mining companies, and how these states are trying to assert their sovereignty within this system. My research is based on data I collected during my PhD fieldwork in Ghana, South Africa and Gabon.

One of the stated goals of the Provost’s Postdoctoral Fellowship is to attract researchers to U of T who are asking tough questions. What are yours?

Canada is the home state for many mining companies that perpetrate human rights abuses in Africa. I’m looking at the responsibilities of the host African states, the companies themselves and Canada (as the companies’ home state) for addressing these injustices. In political science, and even in international law, this is a underexamined proposition. I’m making the case that Canada has a responsibility to deal with the abuses.

How has the fellowship enabled you to advance your research?

First, it’s an incredibly well-funded postdoc, which has allowed me to participate in some international conferences. Last October, for example, I went to the African Studies Association conference in Nairobi. It gave me access to a network of African scholars that would not have been available to me otherwise.

It’s also a perfect combination of independence and support. It has allowed me to focus on my research and writing, my networking and conferences, while at the same time giving me the help from an adviser when I need it.

What was it like for you coming from West Africa to attend university in Canada?

You can see the legacy of colonial racism in Burkina Faso, but my experience of race there – and the discussions around it – were much different from what I encountered here. Canada was a wake-up call. During my master’s in political studies at Queen’s, I was the only Black person in my program. I met a few Black students from other departments because we would see each other around campus, nod at each other and start talking. We realized that we had all had the same experience with people assuming we were there because of diversity quotas.

As a teaching assistant, I always felt like I had to work extra hard. I remember seeing colleagues who prepped for 30 minutes before teaching and never had any issues. But I felt the weight of having to be extra-prepared in case people assumed I didn’t deserve my position or wasn’t as knowledgeable.

Did you encounter other barriers or examples of racism in academia in Canada?

On two different occasions, I had white, male colleagues tell me to my face that I would have an easier time getting a tenure-track position because I was a Black woman – that due to “diversity hires” I was “doubly favoured.” That still hurts today. And these were academics who considered themselves to be politically on the left.

When I got my offer from U of T, I had been on the job market for four years. I have three postdocs. I did a non-academic job for a while to make sure I was financially stable. My two white, male colleagues both got their dream jobs faster than I did.

I recently saw a tweet by Malinda Smith, a Black professor at the University of Alberta who has been in her job for 25 years, and who said she has been hearing for 25 years about how much easier it is for racialized people to get academic jobs. Her response was, “Show me the evidence. If it’s so easy for racialized people to get jobs, look at your department and at universities across the country and show me the evidence.”

I felt so seen and validated.

Why is representation in academia so important?

Representation allows students to see what’s possible for them. Throughout my entire academic career in Canada, from undergrad to PhD, no Black professors taught me. But before coming to Canada, all of my teachers – everyone in positions I could ever hope to hold – were Black. I knew I could be anything I wanted to be. When I came here, I realized that my friends from Canada or the U.S. who were Black did not have that experience.

Earlier, I gave you an example of blatant racism in academia, but it’s often much subtler than that. You just feel like you don’t belong and you don’t know why. You start to doubt that your feelings and experiences are valid, until someone says, “Yes, I’ve experienced the same.”

What do you see as the value of the Provost’s Postdoctoral Fellowship?

It’s huge. However, it’s interesting: Ten years ago, when I was starting my master’s, I would have had qualms about applying for something specifically for Black and Indigenous people. I remember refusing to check the “race” box when I was applying to my master’s and my PhD. I was afraid people would assume I got where I was because I’m racialized.

Then, one of my friends said, “You know, refusing to check those boxes does not stop ill-intentioned people from thinking that this is why you were accepted. We have a steeper hill to climb. We need to seize opportunities created for marginalized people.”

I’ve thought a lot about this, and when I applied for this fellowship I was in a very different state of mind. I agree with my friend. We need to claim this space very proudly. People of colour have to do much more to get where we are, and at the same time fight negative perceptions of how we got where we are.

The fellowship counters the idea that excellence and diversity are mutually exclusive.

What impact did receiving the fellowship have on you personally?

It was extremely special for me. It’s just an amazing opportunity to have my research funded and to work with my supervisor.

When you start as a professor at U of T Mississauga next year, will you see yourself as a mentor or role model for Black students?

I hope that for Black students who may see me as a potential mentor my presence affirms their belonging. The great thing about my own experience as a Black student seeking Black mentors within the university is that I was always doing it within a group of students, often from different departments. This served to build an inspiring community that sustained me through my entire time as a student. We shared our struggles, fears, joys and hopes. And it kept me wanting to become a prof one day, no matter how hard it was. As a prof, I really want to approach mentorship as a community-building effort, where those who do not feel represented in academia can find a space where they belong on their own terms. I know this will be challenging, but I also know there are others like me who are keen to build this community, as well as allies who are willing to do the hard work of learning, unlearning and supporting. I am excited about the journey ahead.