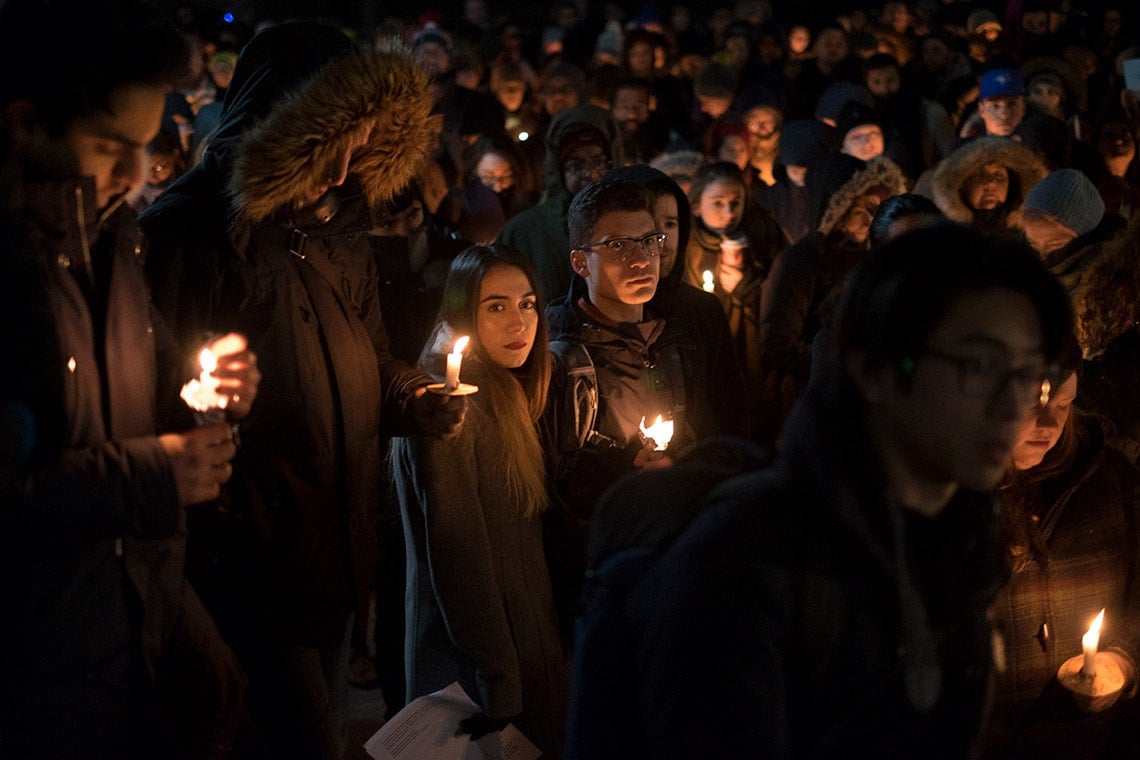 Mourners at the Jan. 29, 2017 vigil on the downtown Toronto campus of the University of Toronto (photo by Geoff Vendeville)

The night after the shooting at a Quebec City mosque, which claimed the lives of six Muslim men and injured many more, Torontonians rallied on the University of Toronto campus to show support for the Muslim community.

Events are being planned around the anniversary of the Jan. 29 tragedy, to keep the memory of victims alive and highlight the importance of fighting Islamophobia and other forms of hatred and discrimination.

Experts from U of T and Wilfrid Laurier University will discuss what Canada has learned from the massacre. The event at U of T's Centre for Ethics features Chris Cochrane, an associate professor of political science at U of T Scarborough, who specializes in anti-immigrant sentiment; Mohammad Fadel, an associate professor in U of T's Faculty of Law and Canada Research Chair in law and economics of Islamic law; and alumna Jasmin Zine, a professor of sociology and Muslim studies at Laurier, who has written extensively about Islamic feminism and Muslim women's studies.

A vigil will be held at Nathan Phillips Square near Toronto City Hall. The event, a memorial and call to action, will be co-hosted by the National Council of Canadian Muslims and city councillor and U of T alumnus Neethan Shan, who introduced a motion for a Muslim youth fellowship at city hall.

At Hart House, the Multi-Faith Centre and the  Muslim Students' Association are hosting "One Year Later: Islamophobia & the Quebec Mosque Shooting," a prayer followed by a panel discussion featuring community activist Gilary Massa; legal analyst and U of T alumna Azeezah Kanji, who is also the director of programming at the Noor Cultural Centre; Imam Yasin Dwyer, the Muslim chaplain at Ryerson University; and Lucy El-Sherif, a PhD student at the Ontario Institute for Studies in Education.

Know an event at U of T that's not included? Send a message to U of T News (uoftnews@utoronto.ca).

Not in Toronto? The National Council of Canadian Muslims has published a longer list of vigils and memorials to be held across Canada.

A year after the Quebec mosque shooting, U of T experts reflect on Islamophobia in Canada