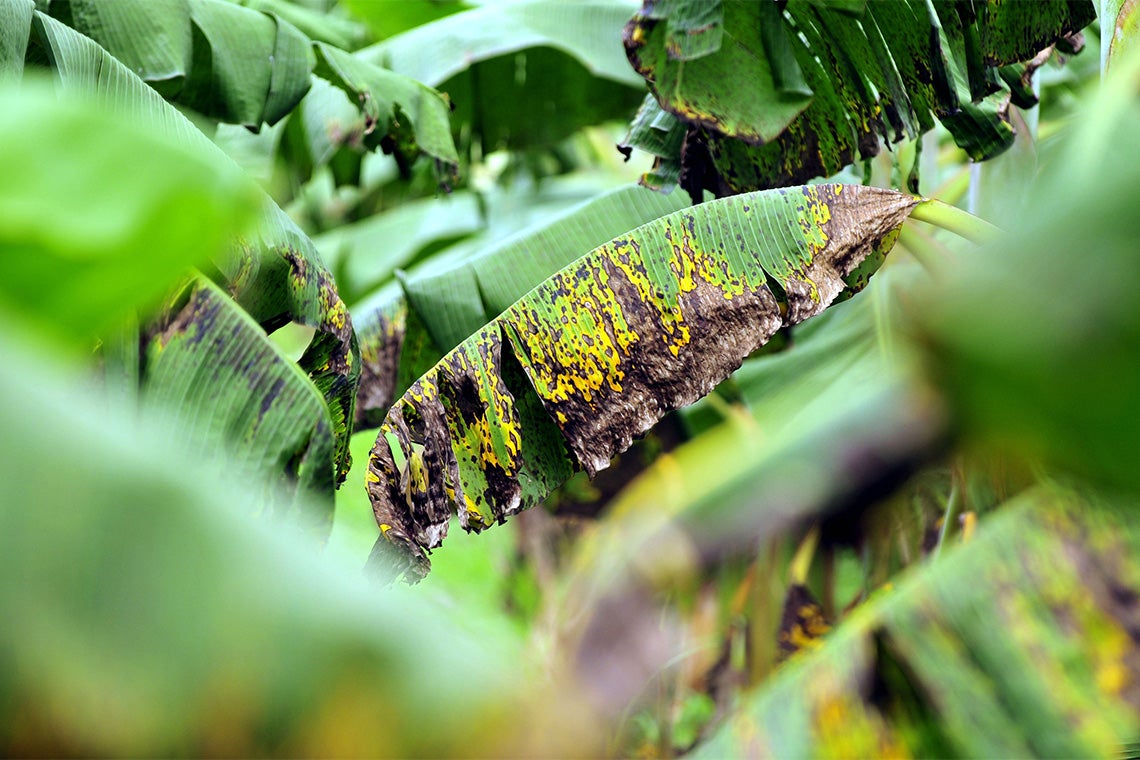 A team of U of T undergraduate students earned top prize in a student-organized global AI competition for their plan to use AI to forecast infections of black Sigatoka, a fungal disease that blackens bananas from the inside out (photo by Neil Palmer)

As part of an effort that took top honours and a $20,000 prize in the recent ProjectX global undergraduate research competition, a team of University of Toronto students proposed the use of a new machine learning architecture to forecast infections of black Sigatoka, a fungal disease that blackens bananas from the inside out.

ProjectX, the brainchild of the U of T Artificial Intelligence student group, challenged teams of undergraduate students from universities around the world to use machine learning to address the impacts of climate change. The competition, which concluded in December, was divided into three categories: infectious disease; weather and natural disaster prediction; and emissions and energy efficiency.

ProjectX organizers maintained a strict firewall between themselves and U of T student competitors to ensure fairness in the competition.

The team from U of T that emerged victorious in the infectious disease category included computer science students Yuchen Wang, Matthieu Chan Chee, Ziyad Edher, Minh Duc Hoang and Shion Fujimori; as well as Sornnujah Kathirgamanathan, a molecular genetics and microbiology student in the Temerty Faculty of Medicine.

Operating remotely from Toronto, Vancouver, Japan, and Vietnam, the team members focused on devising a neural network to forecast the infection risk of black Sigatoka.The fungal disease can have devastating consequences for farmers, decreasing yields and driving up costs. The Food and Agriculture Organization of the United Nations reported that, between 2007 and 2009, St. Vincent and the Grenadines faced a 90 per cent decline in banana crop production due to the disease.

While mathematical models of infectious diseases already exist, it is difficult to incorporate climate effects into those models.

Neural ODEs are a family of deep neural network models invented in 2018 by U of T researchers – including computer science PhD student Jesse Bettencourt, the team’s mentor in the competition.

“Our mentor Jesse, being among the inventors of Neural ODEs in 2018, provided amazing support and insight throughout the project,” says Chan Chee.

ProjectX teams also had a network of climate and machine learning experts that they could reach out to throughout the competition.

Reflecting on their experiences, members of the U of T team shared their advice for students who may want to get involved with competitions like ProjectX in the future.

“I had never heard of machine learning before coming to Canada,” says Chan Chee, who is originally from Mauritius. “Regardless of your background, don’t be afraid to try new things and go for it.”

Wang, for her part, encouraged female peers to step up.

“Women in computer science – go take a leadership role and get involved in technology development,” she says. “Don’t be afraid to shine your light. You are more powerful than you’d imagine.”

Kathirgamanathan similarly advises fellow students not to underestimate their abilities.

“In a typical year, there is absolutely no way I would have found myself in a competition like ProjectX simply because I have close to zero experience with AI,” Kathirgamanathan says. “However, I was surprised at the contributions I could make with my limited programming experience.”

Chan Chee says the team was “ecstatic” to see the results of its work contribute to the machine learning community.

“As six undergraduate students, this success encouraged us to continue advancing the technology for humanity in the future.”