Printem revolutionizes the printed circuit board 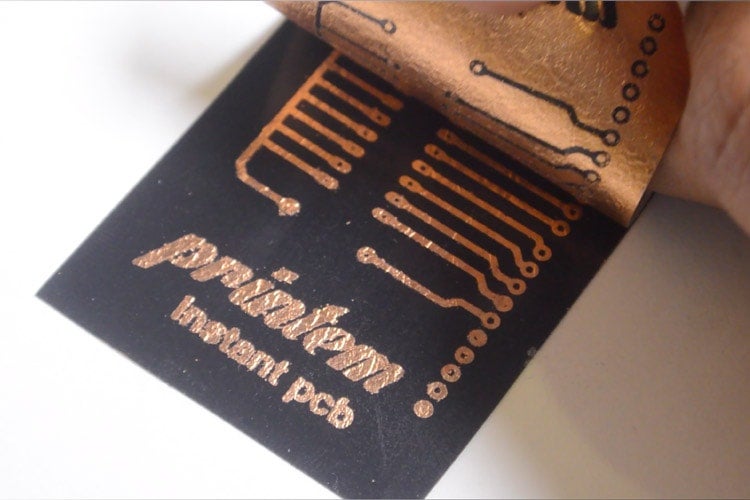 From alarm clocks, to smartphones, to complex satellites: Printed Circuit Boards (PCBs) lie at the core of all electronic devices.

While crucial to electronics, PCBs are expensive, time-consuming and require the use of specialized equipment. That’s no longer the case thanks to the University of Toronto startup Printem. With just two items – Printem’s custom designed film and any home or office printer – anyone can create a fully functional printed circuit board.

On May 17, Printem was among four products recognized as U of T Inventions of the Year. The awards, which recognize their uniqueness, potential for global impact and commercial appeal, were presented at the university’s third annual U of T Celebrates Innovation (link to story) event in front of an estimated 200 guests, including Ontario Lt.-Gov. Elizabeth Dowdeswell.

“Simply put, Printem does for the making of electronic circuits what Polaroid instant film did to traditional photography,” said Varun Perumal Chadalavada, co-founder of Printem and computer science PhD student.

“Just as Polaroid took a multi-step process of developing photographs in a dark room and condensed it into an instant point and click process, Printem allows users to create PCBs in less than two minutes.”

Users simply print their desired pattern onto the Printem film, expose it to the light for approximately 30 seconds and peel off the top layer to reveal a fully formed and functional PCB underneath.

By removing the equipment and cost barriers to producing these key electronic components, Printem has the potential to change hardware development, prototyping and the mass production of electronic devices.

“Similarly to how the ubiquity of affordable and capable personal computers has galvanized the development of software, enabling almost anyone, anywhere with the tools to create and deploy software, Printem could enable people all over the world to quickly create and prototype hardware,” explained Chadalavada.

Chadalavada along with his co-founder Daniel Wigdor, assistant computer science professor, has been working on Printem since 2014.

“We’re very honoured to win this award,” said Chadalavada. “When you’re working in academia you’re working in a narrow space and the people you’re interacting with are people who are mostly in that fixed space. For me winning this award is really encouraging because it means that my work is of interest and will benefit a much larger audience.”