Planning for climate change impact: U of T students roll out designs for a south Florida county 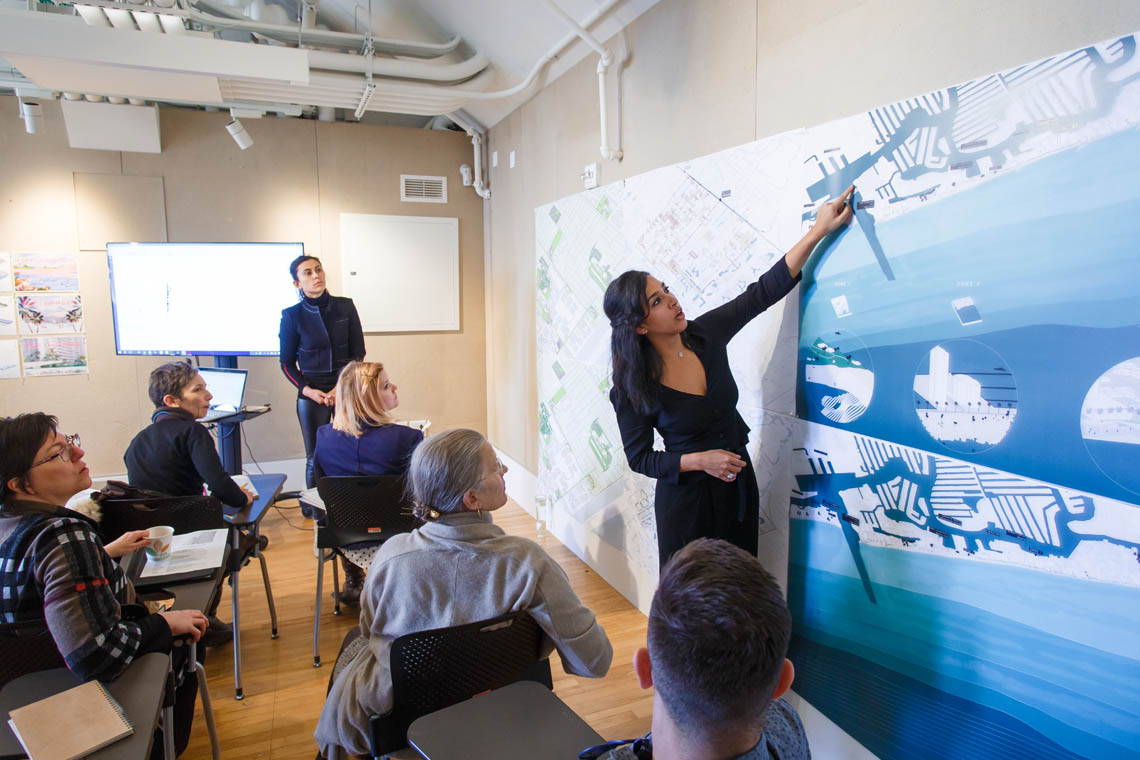 Their ideas include plans for communities under threat of flooding to relocate behind a giant arc-like sea wall that could double as a civic monument, a network of complex canals built in public rights-of-way with specialized plants to treat water pollutants in agricultural areas, and a series of fresh water catchment basins in a neighbourhood where salt water is intruding into the groundwater aquifers.

On a recent Thursday, the master's students who are specializing in architecture, landscape architecture and urban design at the John H. Daniels Faculty of Architecture, Landscape, and Design presented nine proposals to a team of local planning and architecture experts and officials from Florida's Broward County. The southeast Florida region, just north of Miami, has been struggling with rising water levels – a recent report showed sea levels rising six times faster than average – as well as an onslaught of hurricanes and ongoing development in flood-prone areas. 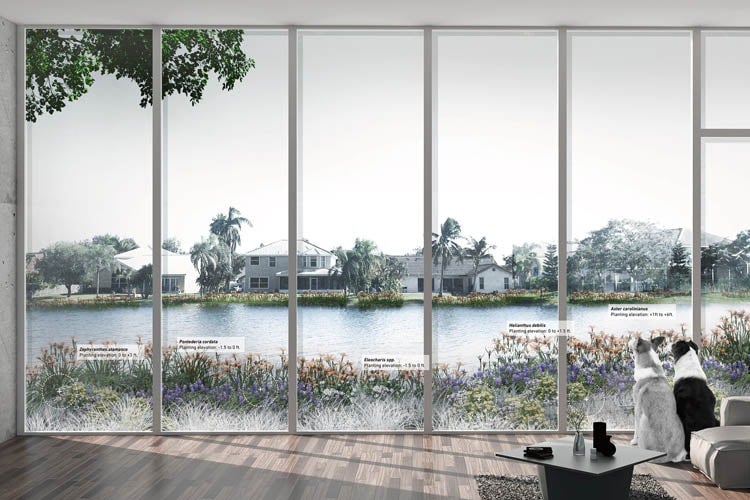 One of the student proposals called for canals in public rights-of-way with specialized plants to treat water pollutants (illustration by Qiwei Song, Chaoyi Cui and Meikang Li)

“It’s the Trojan Horse,” declared Barbara Blake Boy, executive director of the Broward County Planning Council, about one proposal to convert an existing drainage system into a process by which water can be treated for pollutants using specific plant species that can metabolize toxins from the soil and water runoff.

“This compared to the existing structure is amazing. If I could, I would hire you,” added Maribel Feliciano, assistant director of the county's environmental protection and growth management department.

The Florida county, which abuts the Everglades and includes Fort Lauderdale, has been working with Assistant Professor Fadi Masoud to look at large-scale environmental issues and the role of planning policies and tools in the region.

For the third-year master’s class, Masoud and Assistant Professor Elise Shelley, who has experience studying flooding issues in Louisiana after Hurricane Katrina, asked students to come up with design and zoning solutions for the south Florida county.

The students researched parts of the region, looking at the limitations of the stormwater management system of levees and canals and constraints of the zoning code, as well as the dynamic qualities of the area like rising tides and precipitation. 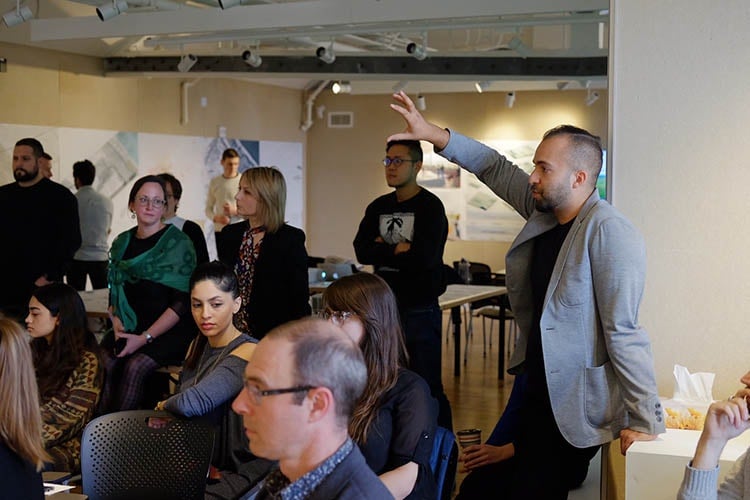 They chose topics such as affordable housing, beaches, parking lots, mangroves and wetlands. Then, looking at contemporary climate resilience designs, they began thinking of strategies they could propose. Many of the students travelled to the region for a four-day site visit in November where they met with local officials and went on walking tours of various sites they had researched.

“We did a lot of analysis because for us to understand the lifestyle in Florida was a stretch,” said Leslie Norris, who along with Natalie Schiabel proposed a series of freshwater catchment basins in a neighbourhood and called for raising the riverbank with berms to allow residents to keep living at the water’s edge.

“It was really important to understand the challenges they’re facing and constantly facing, and yet aren’t moving out. If we want something to be implemented, it has to be familiar enough that people wouldn’t be afraid of it, that they wouldn’t discredit it from the get-go. So our idea allows people to live at the edge of the river but not be worried about flooding. It allows them to maintain their lifestyle.”

Read more about the project As sea level rises, salt water intrudes into existing aquifers, limiting the fresh water supply in Fort Lauderdale. A student proposal calls for a new network of freshwater cisterns and raising the riverbank with berms to allow residents to keep living at the water’s edge (illustration by Leslie Norris and Natalie Schiabel)

Qiwei Song, an international student from China, said his group, which included Chaoyi Cui and Meikang Li, kept the practicality of their proposal at the forefront.

“Advice and critique from our profs and Broward County officials throughout the semester pushed us to consider how we could make our concept happen on the site,” Song said. “The transformation will happen first in the public open space to construct the fundamental infrastructure, which will also serve an education function to the private sectors who could follow incrementally to further improve the drainage filter system. We tried to make everything small steps, but when they are strategically located together, they can make a big difference, and that is the magic of landscape architects.”

Masoud, a landscape architect, planner and urban designer by profession, said south Florida is the prime place to study solutions on the frontlines of climate adaptation and resilience. He and Shelley pushed students to use their imagination and push boundaries.

“Studying these issues in Florida, where the concerns are so heightened by storm events, provides a methodology for rethinking the zoning and planning process everywhere,” Shelley said. 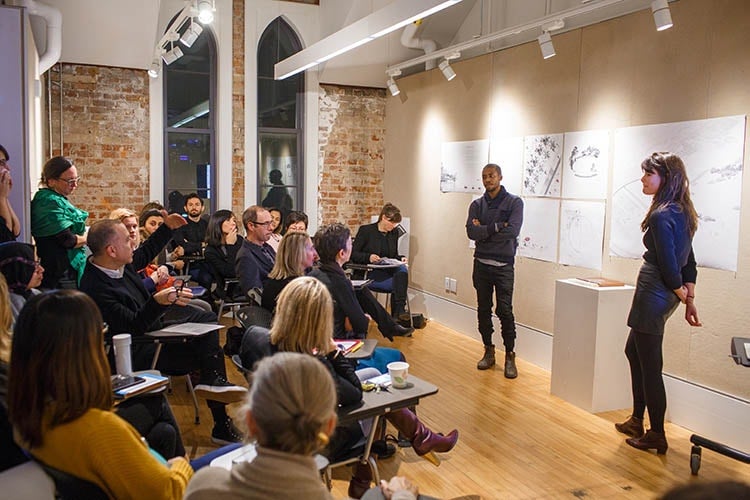 Richard Sommer, dean of the John H. Daniels Faculty of Architecture, Landscape, and Design, critiques a proposal by students Joshua Kirk (second from right) and Jessica Guinto (right) for a giant arc that could form a new sea wall. Guest critics during the session also included Sonya Meek, senior manager of watershed planning at Toronto and Region Conservation, and ERA architect and urban designer Moira Wilson (photo by Harry Choi)

Masoud said the class has been lucky to find willing partners with Broward County and the Southeast Florida Regional Climate Change Compact, who have taken ideas from students in a previous semester and tried to consider them during future policy proposals.

“Climate change adaptation and mitigation is one of the most critical challenges that will face our cities in the coming decades,” Masoud said. “As a professional school in a pre-eminent research university, it is critical to engage future urbanists and designers with incredibly challenging and timely real-life projects.”

Critics who weighed in on the student proposals included the project manager for the City of Vaughan, the planning and design project manager at Waterfront Toronto, an official with Toronto and Region Conservation, as well as Daniels faculty.

Blake-Boy said some of the strongest ideas were a proprosal by Norris and Schiabel for on-site freshwater storage that could be sold to nearby property owners or be made available in the event of a drinking water shortage, and a project by Marianne Lafontaine-Chica and Niloufar Makaremi Esfarjani that ties traditional roads to alternative modes such as canals and creates a sidewalk system that floats as water rises, providing pedestrians access to shelters during flooding events.

“The projects and proposals play a big role in inspiration and future policy considerations,” Blake-Boy said. “The students develop creative and forward-thinking techniques and proposals that could potentially change the face of resiliency planning in Broward County, helping us think outside of the traditional box.” 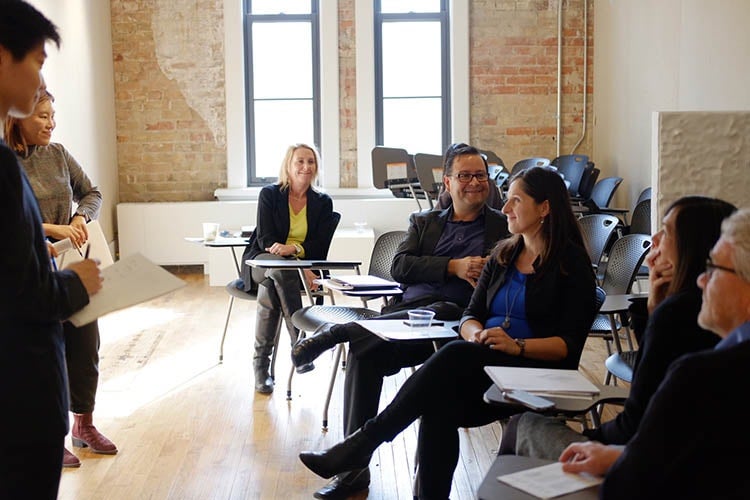