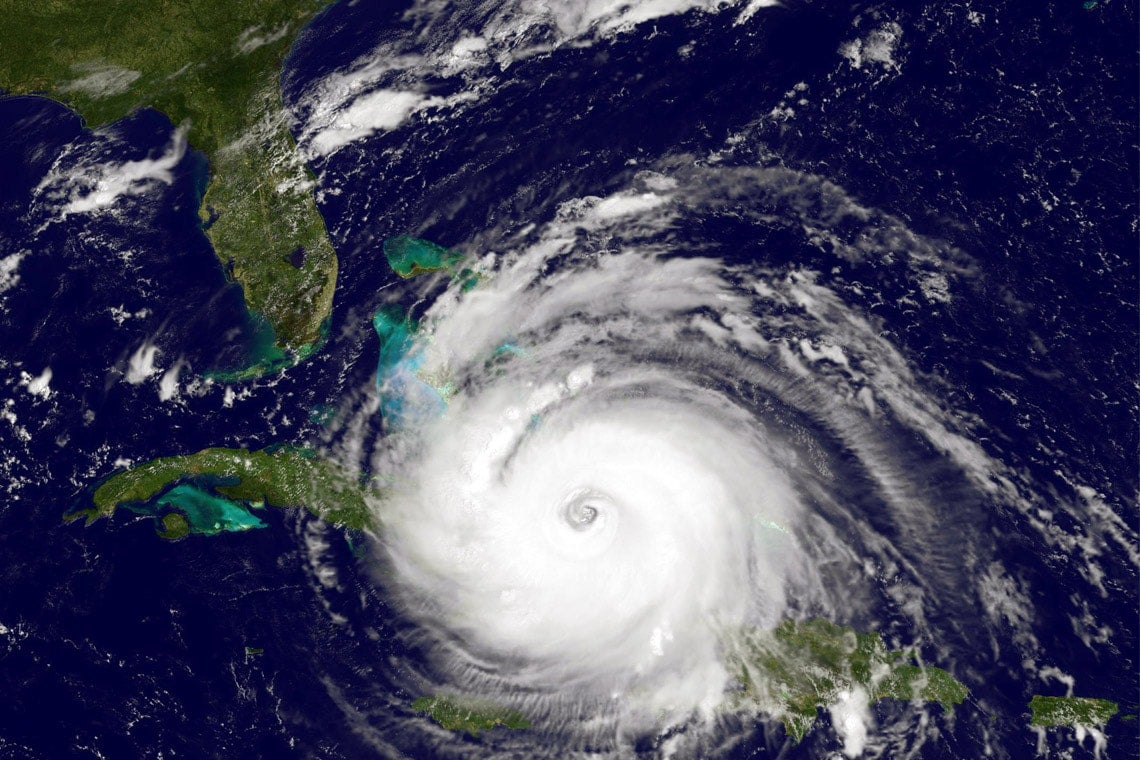 With Hurricane Irma expected to unleash destructive winds and flooding rain in Florida starting on Saturday, University of Toronto’s Fadi Masoud talks about the dangers ahead.

The landscape architect and urban designer, who is an assistant professor at the John H. Daniels Faculty of Architecture, Landscape, and Design, has been working alongside research labs at Massachusetts Institute of Technology (MIT) for the past three years in Broward County, parts of which are now under mandatory evacuation orders. He is looking into large-scale environmental issues, and the role of planning policies and tools.

He talked to U of T News about continuing urban development in the region and concern that planning and construction are not adapting to flooding concerns brought on by hurricanes and rising water levels.

“Because the region’s population is growing, they are building more housing and more infrastructure in places that they know will flood – so in turn that increases the population and number of people at risk,” he says. “Unfortunately, what they are building is only marginally better than what currently exists because there is a lack of innovation in building design and a lack of regulation and standards that forces developers to build buildings differently.” 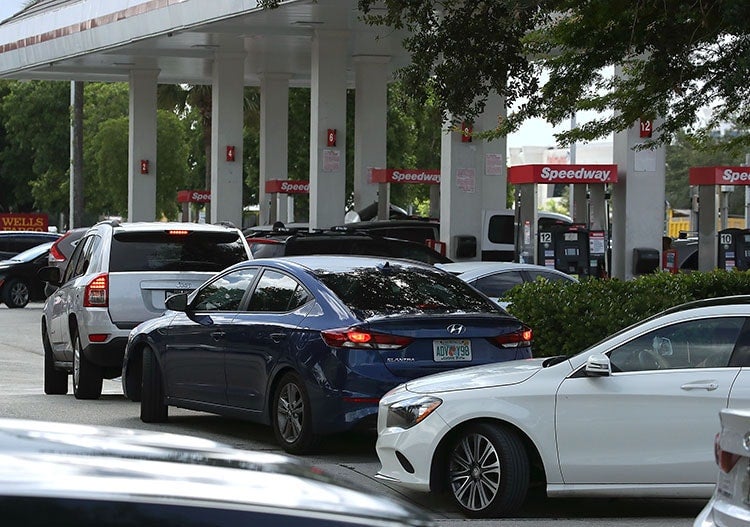 Vehicles lined up at gas stations ahead of Hurricane Irma. Florida has ordered mandatory evacuations for several parts of South Florida (photo by Mark Wilson/Getty Images)

What are major concerns about Irma making landfall in Florida?

With nearly 20 million residents, Florida is one of North America’s fastest growing regions, as well as one of its most threatened. While South Florida and Broward County has a very sophisticated emergency management and response system, and teams of professionals who monitor and deal with hurricanes and flood events for decades, there is deep concern over the noticeable change of frequency, severity and intensity of these events.

More importantly, there is concern that because of continued population growth and pressures on development, that the building and rebuilding of infrastructure (roads, canals, levees) and structures after this hurricane (and others), will use more of the same, status quo techniques of construction, design, planning and growth. The concern is that it will only perpetuate more vulnerability and risk.

Because the region’s population is growing, they are building more housing and more infrastructure in places that they know will flood – so in turn that increases the population and number of people at risk. Unfortunately, what they are building is only marginally better than what currently exists because there is a lack of innovation in building design and a lack of regulation and standards that forces developers to build buildings differently.

Lastly, there is a wider concern that terms such as “sustainability” and “resiliency” get thrown around like buzzwords, with little in the way of tangible strategies, solutions and proposals. This is coupled with political rhetoric which includes climate change skepticism and the possible defunding of adaptation programs at the state and federal levels.

Is Florida built or designed to withstand flooding and high winds?

Most of southeast Florida is low-lying, and its cities are surrounded by water from the three sides: the Everglades to the west, the Atlantic Ocean to the east, and the Biscayne Aquifer in porous limestone below. Four, if you count the moisture from the sky.

Low-lying and poor drainage areas will be particularly susceptible to flooding from Irma’s torrential rainfall. South Florida’s extensive suburban landscape is enabled because of the continued manipulation of a dynamic estuarine environment (fragile ecosystems where freshwater and saltwater mix, and where wetlands once played an important role in protecting coast lines from things like storm surges) and a pervasive real estate-driven housing pattern.

Thirty-five miles of levees and 2,000 hydraulic pumping stations drain a metropolitan area of 15,890 square kilometres, resulting in the “world’s largest and most sophisticated wet subdivision.” Yet, by 2050, an estimated $15 billion to $36 billion of Florida’s coastal property will be threatened by sea-level rise, according to a report last year from the Risky Business Project, a Bloomberg Philanthropies effort that quantifies economic risks from climate change.

Due to rising sea levels and saturated grounds, salt water is now intruding further into the urban fabric than ever before. Ramifications include corroding sewer lines, compromising building foundations, creating sink holes in roads, changing soil profiles and impacting flora and fauna. Flooding in low-lying areas is occurring more often, especially when the moon is closest to the Earth, resulting in higher than average tides called “king tides.” Combined with rising sea levels, and inclement weather, this is exacerbating flooding risks.

A new study suggests that short-sighted measures – such as raising roads – won’t be enough to stop the incoming tide. Sea level rise around the globe is accelerating year-on-year, but along the Floridian coastline, it’s rising up three to six times faster than average.

Broward County has relied on the average wet season water table map from 2000 to guide water management decisions. However, year after year, for the last decade, weather patterns and sea levels continue to deviate from their “historical baselines,” with measured increases in sea level contributing to increases in regional groundwater elevations and saltwater intrusion.

Models indicate that the trend of wetter weather and rising waters will continue, with an estimated 24 inches of additional rise and 9.1 per cent increase in precipitation possible in the 2060 to 2069 timeframe. In this context, historic baselines may no longer be an appropriate predictor of future behaviour or a relevant reference for engineering decisions. Rather than relying on historic baselines when planning zoning, land use, building code and surface water management systems, municipalities would be wise to use projected water levels. 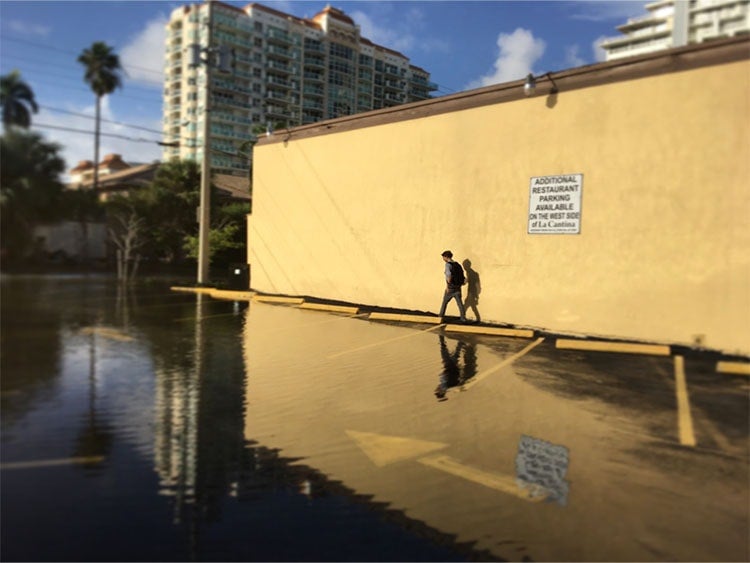 Is Florida investing in flooding infrastructure?

Faced with the threat of sea level rise, coastal erosion and increasingly powerful storms, four southern Florida counties – Broward, Miami-Dade, Monroe and Palm Beach – came together in January 2010 to form the Southeast Florida Regional Climate Change Compact. This novel form of regional climate governance is specifically designed to allow municipalities to set the agenda for adaptation while providing an efficient means for state and federal agencies to engage with technical assistance and support. Especially in the face of marginal support from the state and federal levels, most of the work has been done at the local level.

Miami Beach recently embarked on a $100-million project to raise roads, install pumps and water mains and redo sewer connections estimated to cost $400 million to $500 million. The city of Fort Lauderdale manages seven miles of shoreline, 300 miles of canal coastline, and so the city is actively planning for king tides in the short-term and sea level rise in the long-term.

For example, in the short-term, the city is doing constant maintenance on all its drainage infrastructure, expediting the installation of 133 tidal valves to prevent tidal water from backing up in the storm-drain system and flooding streets. The city is even burying seaweed in the sand to stabilize the beach, creating temporary berms to protect low or non-existent seawalls and raising awareness of flooding on state and county roads that are located out of the city's jurisdiction.

In the long-term, the city of Fort Lauderdale is working on various citywide plans, has created a floodplain manager and a stormwater manager position to co-ordinate resources and implement long-term initiatives, as well as adopted new flood insurance rate maps and updated the floodplain ordinance to establish higher regulatory standards for future development to minimize vulnerability to flooding.

This is all part of an effort at the county level, as well as the regional level, to foster sustainability and climate resilience by implementing mitigation and adaptation initiatives. Depending on its final path, Hurricane Irma will be a true test on the region’s urban fabric, and the efforts and initiatives of all the various agents.