For this PhD candidate, cycling is her work and passion (even in the winter) 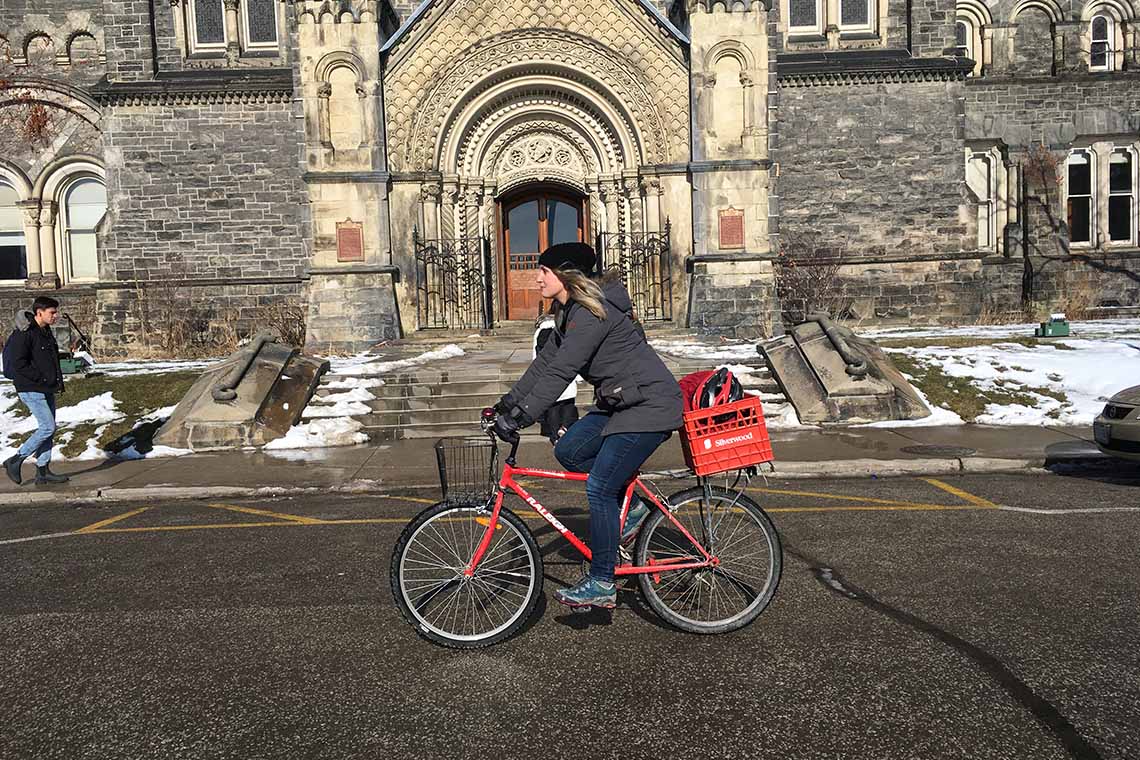 "I was encouraged by how many people were biking on the roads with me this winter," says PhD candidate Léa Ravensbergen (photo courtesy of Cycle Toronto)

For PhD candidate Léa Ravensbergen, getting around on two wheels is not only her preferred method of transportation, but has also served as the driving force behind her transportation-geography research for the past five years.

And thanks to urban cycling's rising popularity over the last few years, Ravensbergen, who in her work focuses primarily on gender and cycling, doesn't lack for material to study.

“Newly released 2016 census-data shows that cycling is the fastest growing mode of transportation for Canadians, with stats indicating that the number of Canadians cycling to work has increased by 88 per cent over the past 20 years,” says Ravensbergen. “We see this trend is particularly prominent in Canadian cities, and the data shows us that in some downtown Toronto neighbourhoods, over 30 per cent of residents commute to work by bicycle.”

“One thing I have noticed, anecdotally, is how many more year-round cyclists there are now compared to a few years ago. I was encouraged by how many people were biking on the roads with me this winter.”

Earlier in 2018, Ravensbergen was featured in a Radio-Canada interview (in three segments,  cycling around with reporter Annie Poulin at 6:53, 7:56 and 8:55), as well as in a Cycle Toronto article, for that very activity: winter cycling. She is a dedicated cyclist that is not deterred by rain, wind, or snow, and the Cycle Toronto article talks about, among other things, the sturdy bike she built herself to better withstand Toronto's wintery streets, as well as her participation last year in Toronto’s cycling mentorship program for newcomers.

“I spent last summer working in collaboration with an excellent program called Bike Host, which was created by CultureLink Settlement Services,” says Ravensbergen.

“This cycling-mentorship program pairs newcomers to Toronto who are interested in cycling, with a Toronto-based cyclist for the summer. The newcomers are loaned a bicycle, lock, and helmet, and spend the summer discovering the city by bike with their mentor."

Ravensbergen says she interviewed participants of the program before and after it took place. "I also performed mapping interviews and bike-along interviews with many participants to shed light on how the experience of cycling is shaped by gender, class, age, etc.," she says.

Included in the findings: Some people associate cycling with low social status in adulthood, and women who were discouraged from cycling as children felt less confident about biking as an adult.

“I was also impressed by how much the bicycle could have a positive impact on people's lives,” says Ravensbergen.

“Some women I interviewed learned how to bike through this program – an achievement they described as incredibly empowering. For them and others, biking provided confidence in their physical abilities, was a time-saving mode of transport, or facilitated a sense of belonging in Toronto, their new home.”

She says she also came away with a great deal of respect for the Toronto-based organizations like BikeHost, Bike Pirates (through which she built her winter bike for less than $100), Cycle TO, and others who are working towards making Toronto a more cycling-friendly city. She adds that she is encouraged by some of the cycling-infrastructure investments that have been made, although she adds that more should be done.

Winter cycling is becoming a distant memory for Ravensbergen as her research has now taken her to the warmer climes of Australia. “I am fortunate to be doing my data analysis in sunny Melbourne, where I will be presenting preliminary findings at Monash University in April,” says Ravensbergen, who will take the next year to write her dissertation on the gender gap in cycling and how identity shapes the experience of cycling, with an aim to graduate from her PhD program in the summer of 2019.

She conducted her research under the supervision of Ron Buliung, a professor in the department of geography and planning at U of T Mississauga.

Ravensbergen's work has been recognized with two prestigious awards by the American Association of Geographers.