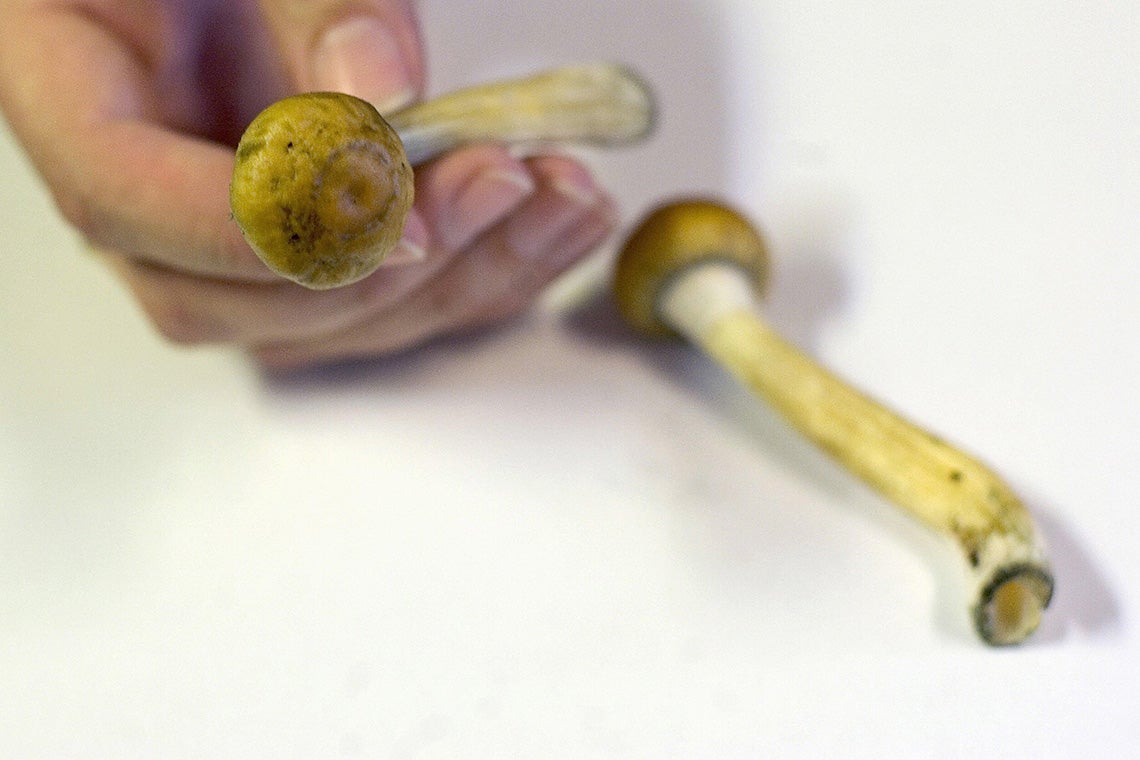 A study by U of T Mississauga researchers found people who took very small doses of psychedelic substances, including hallucinogenic mushrooms, reported improved mood and focus (photo by Evert-Jan Daniels/AFP via Getty Images)

A University of Toronto Mississauga researcher and his colleagues have “uncovered high potential research avenues” for assessing the benefits and drawbacks of microdosing with the psychedelic substances LSD (lysergic acid diethylamide) and psilocybin (the key ingredient in magic mushrooms).

Their study, published recently in the Harm Reduction Journal, found that people who took very small doses of psychedelic substances commonly reported improved mood and focus, along with concerns about illegality and stigma.

Microdosing refers to the practice of regularly ingesting small, non-hallucinogenic amounts of psychedelic substances. The National Post traces the trend back to 2010 when biohackers began seeking a competitive edge. Thomas Anderson, a PhD student and cognitive neuroscientist, Associate Professor of psychology Norman Farb, Rotem Petranker from York University, and colleagues from the U of T Faculty of Medicine and U of T Scarborough are the first to explore microdosing scientifically.

“The most common benefit was improved mood, which suggests that researching microdosing as a potential pharmacotherapeutic treatment for depression could be worthwhile,” Anderson says. “Microdosing could provide a possible alternative to SSRIs [selective serotonin re-uptake inhibitors, a class of drugs commonly used to fight depression], which are great but don’t work for everyone.

“Microdosing won’t work for everyone, either, but it could provide a possible alternative to other treatment pathways.”

Participants also reported improved creativity, which includes divergent thinking, curiosity and openness. This creativity finding agrees with another recent publication by Anderson and colleagues that reported microdosers were more creative and open and less neurotic and dysfunctional.

In the paper, Anderson and colleagues collected reports from almost 300 self-identified microdosers and have distilled the reported improvements into categories. The top categories were: improved mood (27 per cent of reports), focus (15 per cent), creativity (13 per cent) and self-efficacy (11 per cent). Mood refers not only to happiness and well-being but also to reduced depression, according to participants.

The top challenges associated with microdosing were physiological discomfort and concerns about illegality. The discomfort included complaints such as headaches, nausea and insomnia, while illegality posed the biggest concern for microdosers, who must shop the black market to get psychedelics. They may not be sure of the purity of their purchases and there may be an irregular supply.

Stigma concerning illegal substances was also present, but users may not face as much stigma as the microdosing community fears, says Anderson.

“Many people are relatively accepting of psychedelics privately, but the same people can incorrectly believe that others are not so accepting and so they think there is lots of stigma when there isn't. We’ve had academics come out of the woodwork to support us – we have not heard from anyone that’s actually against the responsible scientific study of these substances.”

The authors caution that the study makes no causal claims – that it simply reflects the experiences of people involved in microdosing.

“Scientifically speaking, we don’t know if microdosing does anything at all,” says Anderson, adding the goal of the paper is to provide a basis for future research and to reveal research avenues with high potential so funding can be spent investigating the most promising uses of microdosing.

“Ultimately, pre-registered randomized placebo-controlled trials (RCTs) of microdosing psychedelics are needed to test its safety and efficacy,” the authors write.