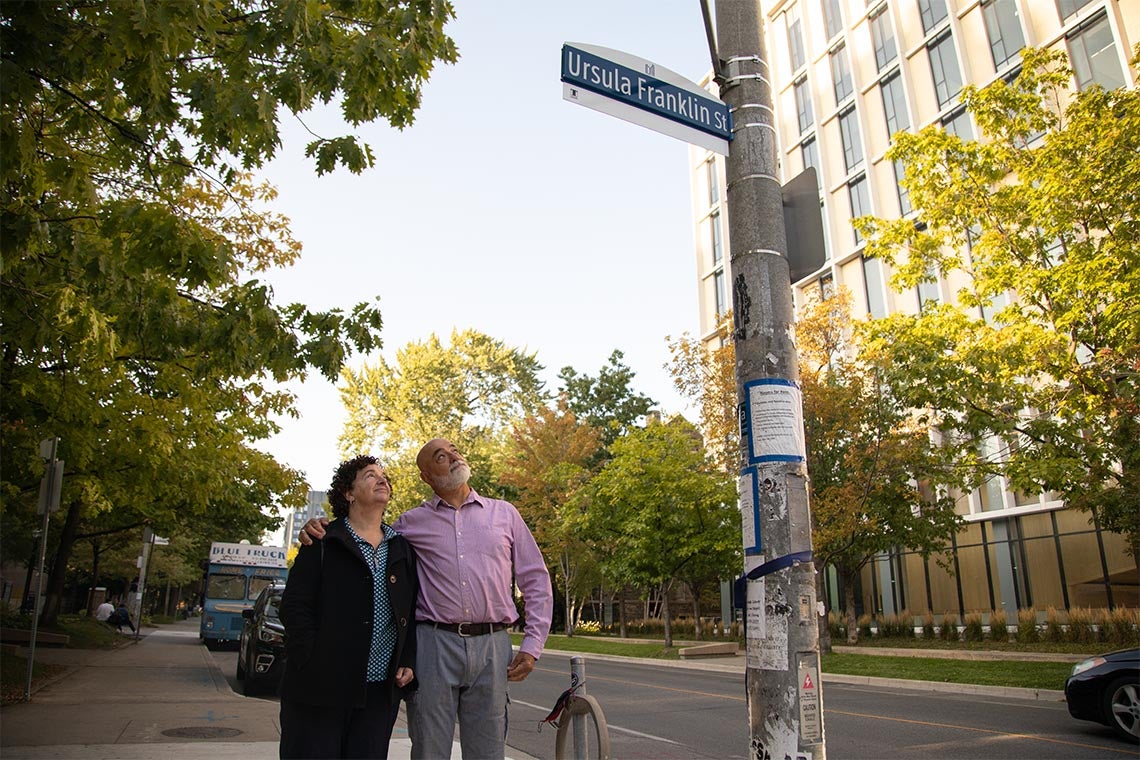 Monica Franklin and Martin Franklin, children of the late University Professor Emerita Ursula Franklin, look at the street sign bearing her name on U of T's St. George campus (photo by Johnny Guatto)

The University of Toronto this week commemorated the renaming of a street on the St. George campus in honour of University Professor Emerita Ursula Franklin, the distinguished physicist and metallurgist who taught at U of T for more than 40 years.

Ursula Franklin Street connects Spadina Avenue and St. George Street on the western strip of campus, near the heart of U of T’s engineering footprint and such key buildings as the Myhal Centre for Engineering Innovation & Entrepreneurship.

Formerly Russell Street, the renamed roadway now commemorates one of the most influential scientists and engineers in Canada’s history and a feminist and peace activist whose contributions transcended her prolific scholarly achievements.

“Professor Franklin was an outstanding scholar and a beloved teacher who spent enormous amounts of time mentoring students,” said Vice-President and Provost Cheryl Regehr at a small ceremony held on campus Monday. “She was also known for her incredible advocacy, as an advocate of women and girls and a peace activist.

“This street – this historical marker – is a true testament to Professor Franklin’s cherished intellect and societal impact. We are so very proud to have it here at the University of Toronto.”

Monday’s ceremony was also attended by several members of Franklin’s family and Professor Chris Yip, dean of U of T’s Faculty of Applied Science & Engineering. 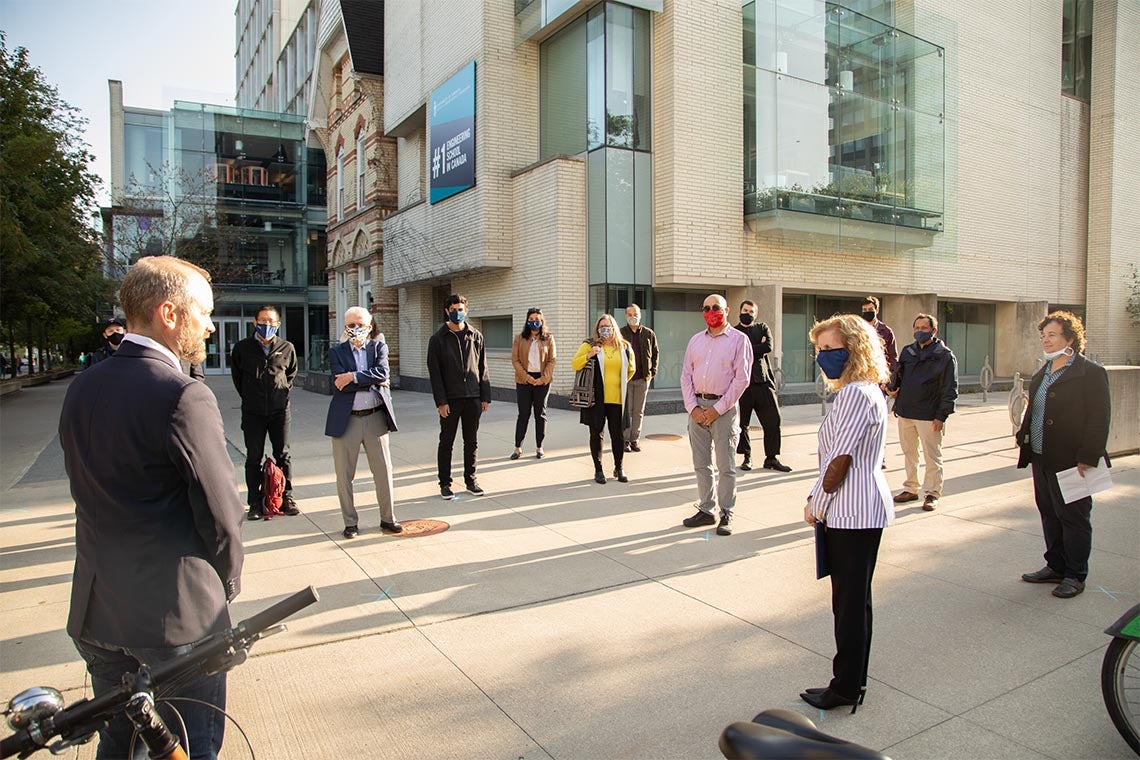 Born in Germany in 1921, Franklin came to U of T as a post-doctoral student in 1949 after surviving the Holocaust. In 1967, she became the first female professor in what is now the department of materials science and engineering. In 1984, she became the first woman to receive the honorific of University Professor, a designation that recognizes unusual scholarly achievement and pre-eminence in a field.

Franklin received an array of honours including honorary degrees from more than 20 universities and was named a Companion of the Order of Canada, a member of the Order of Ontario and a recipient of the Award of Merit from the City of Toronto. Her work advancing the equality of girls and women was also recognized by a Governor General’s Award. Franklin died in 2016 at the age of 94. 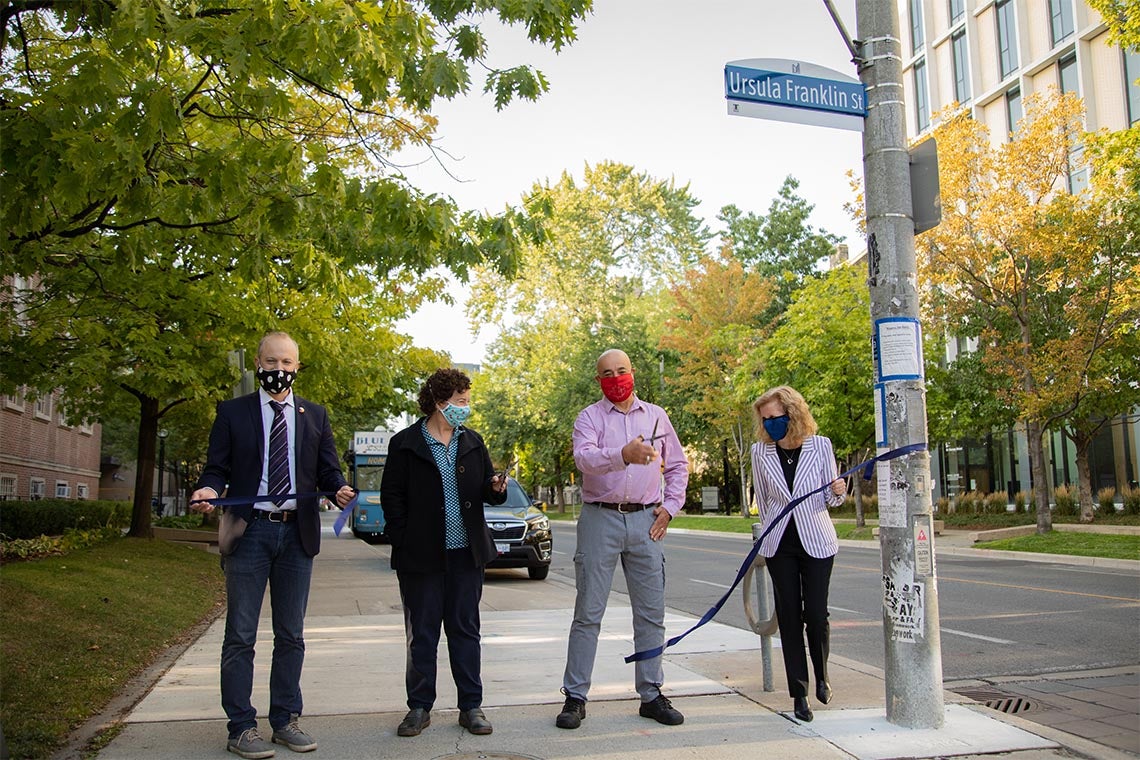 From left to right: Councillor Mike Layton, Monica Franklin, Martin Franklin and U of T Vice-President and Provost Cheryl Regehr take part in a ribbon-cutting ceremony (photo by Johnny Guatto)

Local city councillor and U of T alumnus Mike Layton said the renaming of the street marked “a process of turning the past into a new interpretation of the people that made this city great, made this university great and made our country and the world a better and more special place.

“This means a lot not only to Professor Franklin’s family, but also to the wider university family, and is just a small way to recognize her contributions to the University of Toronto.” 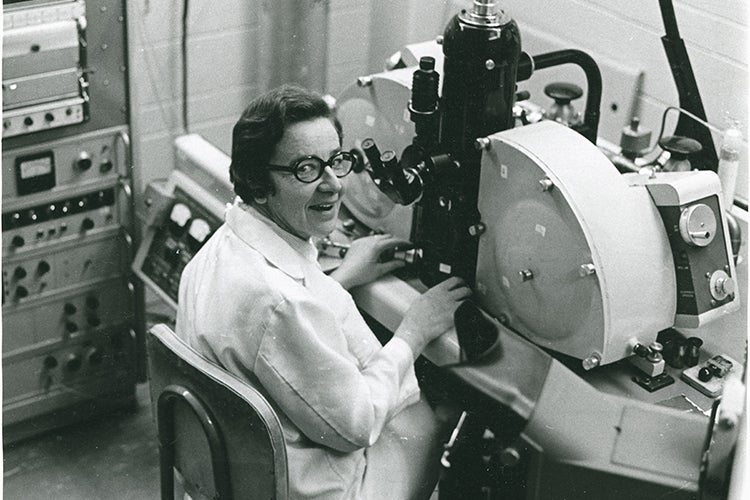 Franklin's daughter, Monica Franklin, a U of T alumna, said her family was proud to see the street named in her mother's honour.

“I know my mother would be pleased by having a street named after her, as well as its location, a stone’s throw – although she would object to the analogy – from Engineering and the Wallberg Building where she spent most of her U of T Engineering life,” she said in her prepared remarks.

“It is also not far from Massey College, where she spent much of her last 20 to 25 years. As well, it is the address for other U of T departments – astrophysics, anthropology and Earth sciences – appropriate given her life’s work making connections between disciplines.” 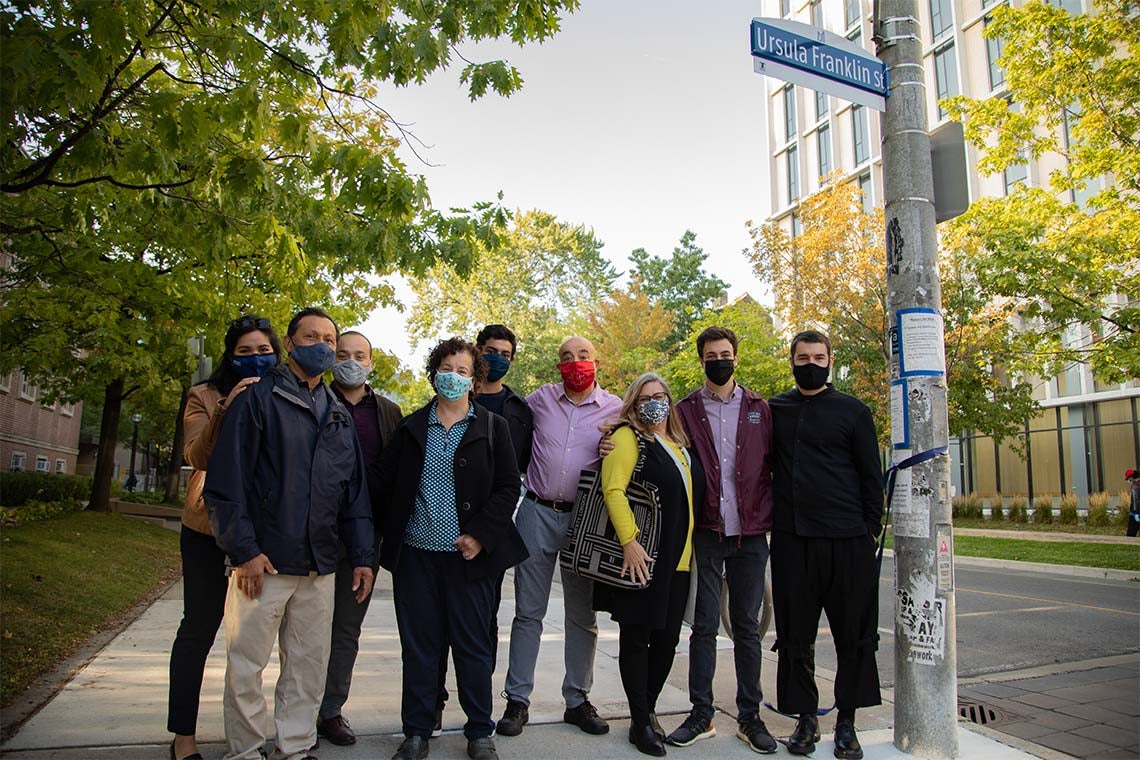 The naming of Ursula Franklin Street was set in motion following a request to Councillor Layton from Michael Valpy of the Munk School of Public Policy & Global Affairs and Massey College. The street was previously named for Peter Russell, the first administrator of Upper Canada and an opponent of efforts to abolish slavery in the colony.

The decision to rename the street was approved by a unanimous vote of the Toronto and East York Community Council in March.

Franklin’s daughter said her mother’s life and activism held within it a message that's timely to the ongoing reckoning with racism and intolerance in society.

“I knew she would abhor the tribalism and how easy it is to fear the ‘other’ – those who are not like us, who look and act differently, who come from different backgrounds,” she said. “She would urge us to find what we have in common – that we are all seeking a better, more just and equitable society for ourselves and our children.”